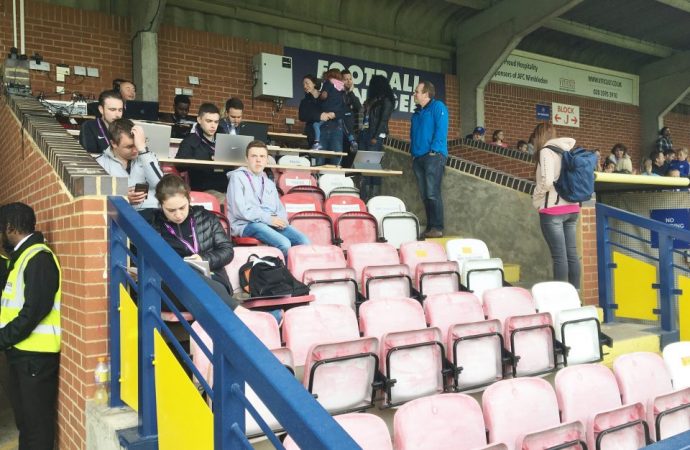 A stonking second half for Chelsea Women in Lyon gave the Blues a platform to build on in the eagerly awaited second leg of the Champions League semi-final at Kingsmeadow in a week’s time. Although Chelsea are 2-1 down from the first leg in France, there were hugely encouraging signs for manager Emma Hayes, and

A stonking second half for Chelsea Women in Lyon gave the Blues a platform to build on in the eagerly awaited second leg of the Champions League semi-final at Kingsmeadow in a week’s time.

Although Chelsea are 2-1 down from the first leg in France, there were hugely encouraging signs for manager Emma Hayes, and she was delighted with her girls’ fightback.

Beth England – who made a big difference in Lyon when she came on in the second half – is expected to start up front when the Blues reconvene at 2pm on Sunday April 28, having had a week to fully recover and work on their tactics.

Although Fran Kirby led the line for Chelsea in France, she was visibly tiring towards the end, and was replaced by England in the 69th minute. England’s strength, presence and sheer brass neck helped rejuvenate the Blues, who had the lionesses’ share of the last 45 minutes of an absorbing, end-to-end game.

There’s no doubting the fact that Lyon bossed the first half. Chelsea, with a back four of Jonna Andersson, Magda Eriksson, Millie Bright and Maren Mjelde, struggled to contain Lyon, who – based on reputation and experience in a competition they’ve won multiple times – were expected to emerge victorious from the first leg.

Things looked bleak in the 22nd minute when Eriksson, attempting to cut out a dangerous cross by the pacy Delphine Cascarino (no relation to Tony), put the ball into her own net for the second time in a week. On this occasion, however, there was no need for tears… she was doing her best to defend and it was just one of those unfortunate moments that happen to every defender from time to time.

Two own goals in seven days is hard to take, but – oddly – Eriksson seemed stronger for the experience this time around. Hayes was right to fling the centre-back into the fray once again as soon as possible, and the Swede’s gritty tackling and dependability in other departments during the match more than compensated for the inevitable disappointment she must have felt in that lonely moment.

However, a quarter of an hour later it was 2-0 to the French team… and another slightly freakish goal at that. A corner flew in from Chelsea’s right and seemed to sail over everyone and into the net. It’s possible one of the Lyon women may have got a ponytail to it, but it was that tight.

Chelsea began their full-blooded reply in the dying moments of the first half, stringing together a few attacks. Then Ramona Bachmann was tripped – it was soft – in the area, and Kirby stepped up to take the penalty in stoppage time. Unfortunately, it was one of her poorer efforts, and the Lyon keeper saved with ease.

Disheartened, Chelsea traipsed off after ref Katalin Kulscar blew for the interval. But Hayes worked her magic in the dressing room, and it was a rejuvenated and reinvigorated team which flew at their French opponents in the second half.

England’s arrival prompted a greater willingness to push and press forward, aided by a more attacking formation with the Blues’ more traditional line of three attackers working together where possible.

Chelsea’s plain-spoken blonde no15 was in the right place to meet Ji So-Yun’s cross with a header back to tee up Cuthbert in the 72nd minute, and the tartan atom was able to volley goalwards and in.

To a near continuous French soundtrack of When The Saints, assisted by headache-inducing drumming which the Kingsmeadow faithful will have to live with next weekend, Chelsea continued to pile forward, shocking their opponents, who’d been expecting to build on their first-half lead without really exerting themselves.

It was the Blues who gained in strength as Lyon began to wilt – testimony to the fitness training and season-long encouragement from the Chelsea management set-up and coaching staff.

The fact that there is now a clear, uninterrupted week to prepare for Olympique Lyonnais’s return to England means Hayes will feel there is a real chance (provided Bright and her crew keep it tight at the back) of reaching the final in Budapest on May 18.

Lyon 2 Chelsea 1 is, frankly, a scoreline that Hayes & Co would quietly have settled for before this tie; with the crucial away goal giving a further boost to Chelsea’s chances.

It’s all to play for at Kingsmeadow, and supporters of both teams can expect a nervy, thrilling, end-to-end encounter when Part 2 is played out. Sadly there won’t be anything like the 23,000 who made such a noise in Lyon, but attendances are building, and when Kingsmeadow is improved and developed, crowds of that magnitude will turn up in five years’ time, such is the boom in the women’s game.

Under 20s and over 65s qualify for free tickets for what will be the final home fixture of the 2018-19 season. All the inbetweenies pay £6. Click the link to buy: