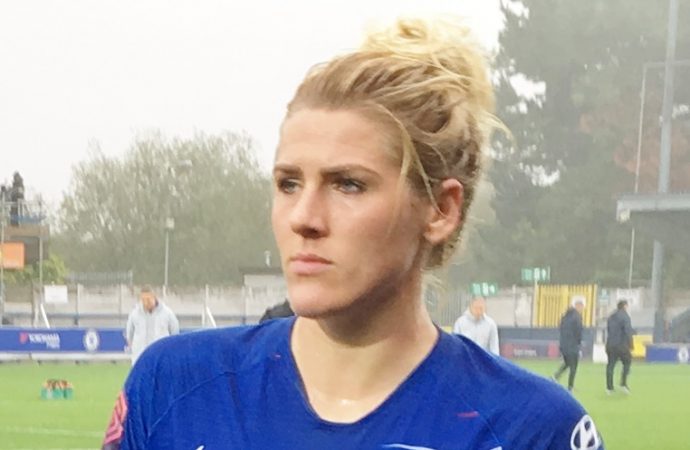 Millie Bright put in a player-of-the-match performance against Birmingham City in Solihull, and scored her first goal of the season, as Chelsea whitewashed the Brummies 6-0… but manager Emma Hayes was not satisfied with several aspects of the team’s display – particularly a long, lean spell in the first half which allowed the home side

Millie Bright put in a player-of-the-match performance against Birmingham City in Solihull, and scored her first goal of the season, as Chelsea whitewashed the Brummies 6-0… but manager Emma Hayes was not satisfied with several aspects of the team’s display – particularly a long, lean spell in the first half which allowed the home side back into contention, writes Jane Grove.

With such a comprehensive scoreline, you’d have thought any gaffer would have been more than pleased with their team’s effort. But its a measure of Chelsea’s professionalism and high standards that Hayes was underwhelmed and determined to improve what she saw as wayward player focus.

She knows that tougher opposition would have made life much harder for the Blues.

The problem was, Chelsea scored too quickly! Ji So-Yun’s free kick in the second minute flew past Birmingham keeper Hannah Hampton and into the back of the net.

Yet almost immediately, the intensity of those first two minutes evaporated, and Birmingham began to gain in confidence and belief.

Bright restored the focus after 37 minutes, galloping forward in a long upfield run, passing to Ji who passed on to Guro Reiten on the left. The Norwegian looked up and saw Bright still sprinting, and sent the ball forward for the defender to hammer home with her left foot. “Millie told me she was thinking accuracy, not power,” said Hayes afterwards, alluding to previous instances in which the powerful centre back has sighted goal but blazed over the bar.

In stoppage time, Beth England picked up Bright’s long diagonal ball, controlled superbly and shot left-footed into the goal – something that will have impressed the watching Phil Neville, national manager. Both Bright and England were on excellent form in the murky Birmingham air, illuminating an otherwise grey day. Few defenders have the power to generate a Millie Bright-style long ball, and Chelsea are lucky to have such a strong presence in their back line.

Chelsea were much better in the second half, with Drew Spence adding a goal in the 48th minute. Reiten fed England, who flicked the ball to Spence to convert. Three minutes later, Spence got a second after a Ji cross from the right landed perfectly on her head to nod home. After 11 years service with Chelsea, Spence is still a wonderful force to be reckoned with.

Fed by Maren Mjelde, who was moved up into midfield after Hannah Blundell replaced Ji, England netted her second in the 63rd minute. It remained 6-0 to Chelsea.

Afterwards England said: “Ji’s early goal was good for us; it set the standard and we continued to dominate from then. We’ve got goalscorers across the pitch, from back to front. We got a clean sheet, first and foremost, and we’re top of the league again [after earlier results had briefly put Arsenal and City above them].”

Bright added: “Em gives me licence to get forward, and [scoring goals] is something I’ve got in my locker. I’ve had opportunities in previous games, and I’ve been dying to get a goal… and finally did.”

Hayes will let her squad enjoy the result for a day or two before gathering everyone together again at Cobham on Wednesday to run through the aspects of the victory that left her frustrated on the touchline.

“I wasn’t happy after the first goal,” she said. “Standards dropped, and overall I’m not happy with the performance. Our organisation in transition was disorganised. We did start the second half better, and I’m pleased for Drew that she got a couple of goals.

“She’s been trying hard in training, and I’m delighted for her today.”

There was a chance for 16-year-old striker Emily Murphy to have half an hour on the pitch at Solihull, giving her valuable experience after her debut against Spurs in midweek in the Conti Cup.