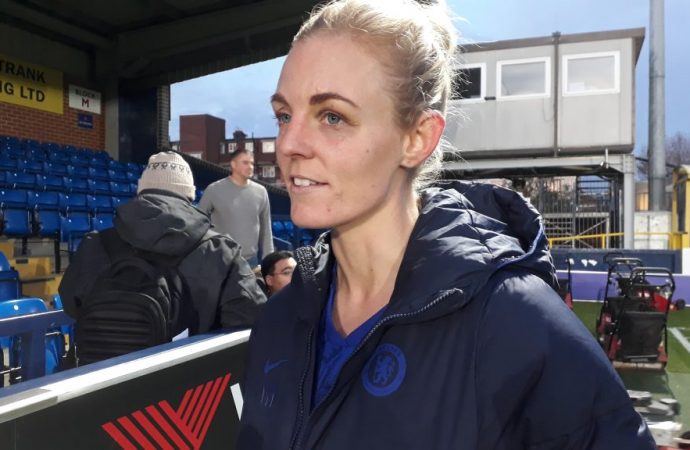 Nursing a shiner (no, she wasn’t in a pub fight… a ball hit her in the left eye while on international duty), Sophie Ingle was head-and-shoulders the Player of the Match in Chelsea Women’s recent hard-fought WSL game against Man U at Kingsmeadow. Her performance, bossing the crucial space between defence and midfield, was one

Nursing a shiner (no, she wasn’t in a pub fight… a ball hit her in the left eye while on international duty), Sophie Ingle was head-and-shoulders the Player of the Match in Chelsea Women’s recent hard-fought WSL game against Man U at Kingsmeadow.

Her performance, bossing the crucial space between defence and midfield, was one of the 28-year-old’s best in a burgeoning 16-year career that started in a Welsh pre-teen boys’ team.

This season Ingle’s displays have grown in maturity and reliability, prompting an intriguing possibility to surface, looking ahead to 2020.

Phil Neville – who was in the crowd watching the Blues defeat Birmingham 6-0 at the weekend – has yet to declare who will captain Team GB, the women’s team that he has been entrusted with managing at next summer’s Tokyo Olympics.

The squad is to be drawn from all four home nations, with the governing footballing bodies of England, Scotland, Wales and Northern Ireland finally putting their differences aside to allow a united British side to be chosen.

So here’s a suggestion for the wearer of the armband: Chelsea’s Sophie.

She has captained Wales for the past four years, since taking over from Jess Fishlock. And with 70 caps to her name, from a decade of internationals, Ingle has an excellent track record at the required level.

She also has past experience of being a club captain (in Bristol), and her constantly improving performances for Chelsea, sitting just ahead of the back line, make her a serious contender for a position which Neville knows only too well from recent England showings needs addressing.

Blues manager Emma Hayes is backing the call. As she enjoys a good working relationship with the Lionesses manager (the pair regularly have frank heart-to-hearts about potential recruits for the England side) she’s in an ideal position to have a word in Neville’s ear.

“She’s such an unsung hero,” she said of a midfielder who began life as a left back before taking a more central role. “If I was Phil Neville, she’d be one of the first names on my sheet going to the Olympics. She doesn’t get half the credit she deserves… and why? Because she’s not English!”

Hayes firmly believes that had Ingle not been born in Llandough, just outside Cardiff, and had instead emerged into the world 35 miles up the road in England, the footballer would have been a Lioness.

“If she was English, she’d be lauded, and I think, talking about the Olympics next summer, there’s no one better to take,” she said. “She can play centre back, in front of your midfield, perhaps she could even play as a full back with her eyes shut! She’s that good tactically.”

Hayes believes that Ingle is now one of the key driving forces behind Chelsea’s WSL dominance, and feels that aspects of the captaincy of Team GB would draw on her strengths. She had a good game against Birmingham City in Solihull, helping the back four of Maren Mjelde, Millie Bright, Magda Eriksson and Jonna Andersson keep a clean sheet before being subbed after 77 minutes to give teenager Emily Murphy some valuable WSL playing time.

“She’s such a coach’s player; she does all that work in front of the backs,” added Hayes, who said that while she recognised that there could often be a gulf of difference between players’ pre-match preparation and the execution of any role in a game, Ingle met all expectations consistently for the Blues, fulfilling precisely what the manager asks of her.

Hayes is certain that if Ingle continues to perform as well as she did in recent matches against Man U and Birmingham City, Neville will have to seriously consider her for a place when Team GB play their preliminaries in Yokohama in July.

In a way, appointing the Welsh captain as the leader of Team GB could also be a shrewd choice from a management perspective; bringing a fresh face into a side destined to still be dominated by Lionesses… a neutral, inclusive choice for a side drawn from different nations, rather than automatically insisting an English player should have the armband.

As Chelsea’s No5, Ingle plays in a similar position to the one she has made her own in the Welsh national side, where she wears No4 – passing inventively, defending stoutly and bravely, and helping launch swift upfield attacks.

She has always been appreciated by team-mates… in fact, when she had a couple of years with Liverpool before rejoining Chelsea, she was named Players’ Player of the Year.

She appears to have completely overcome a hip injury that forced her to miss the Welsh victory away to Belarus last month, and Welsh manager Jayne Ludlow is also expected to give Neville a ringing endorsement of Ingle’s ability and form as he composes his squad for Japan.