History is made with blanket 20mph limit across Surbiton 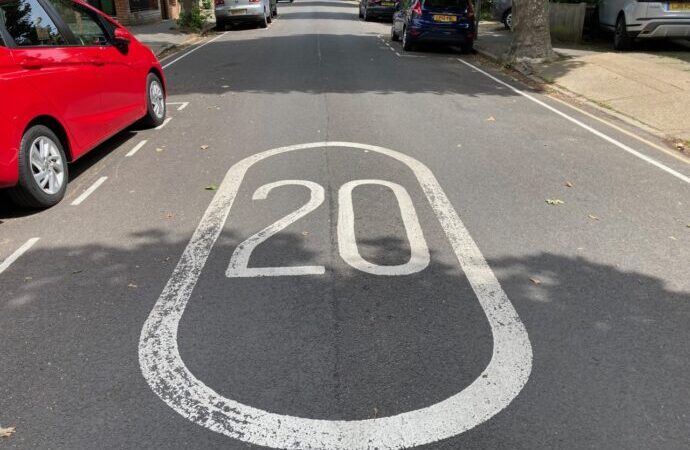 Surbiton has made history by introducing the first blanket 20mph speed limit after neighbouring Kingston fudged a decision. In a remarkable move, the area voted to go it alone and cut the speed limit on environmental and safety grounds… including on major thoroughfares such as Ewell Road, Hook Road, Brighton Road and even Portsmouth Road.

Surbiton has made history by introducing the first blanket 20mph speed limit after neighbouring Kingston fudged a decision.

In a remarkable move, the area voted to go it alone and cut the speed limit on environmental and safety grounds… including on major thoroughfares such as Ewell Road, Hook Road, Brighton Road and even Portsmouth Road.

When the new rules come in later this year, EVERY road in Surbiton and Berrylands, and most in Tolworth, will have a maximum speed limit of 20. The only exceptions are the A3 and those parts of Tolworth that fall within the South of the Borough neighbourhood.

Surbiton’s traffic speed was last debated in autumn 2014, when the then Conservative majority rejected an attempt to reduce the limit on smaller residential streets in central Surbiton. It left the town with a curious patchwork of variable speeds, often going from 30 to 20 and back to 30 in the space of a few confusing yards if there was a school nearby.

Despite being elected with a huge majority, it has taken the Liberal Democrats more than three years to press ahead with this central plank of their manifesto, and in the end – at 11.24pm on the last day of June in the main council chamber of Kingston Guildhall – it took pressure from the borough’s one Green Party councillor to extend the blanket 20mph limit to also cover the main roads.

Cllr Sharron Sumner proposed an amendment to a weaker motion to merely impose the slower speeds on side streets. The Lib Dems on Surbiton’s neighbourhood committee (which has no Conservative councillors at all) supported their former colleague, who switched party after the May 2018 local election. 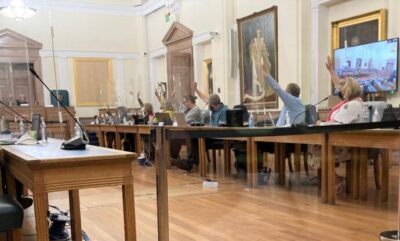 Hands up! It was unanimous when Surbiton’s councillors voted for a 20mph zone

It puts Surbiton at odds with Kingston after each individual part of the Royal borough was allowed its own vote on traffic speed, and it throws up a strange anomaly. Portsmouth Road is partly in Surbiton and partly in Kingston, but only the short Surbiton segment will be 20mph.

Surbiton has now streaked ahead of every other area in agreeing the across-the-board cut in speed. Until last week, only 26% of Surbiton streets were 20, compared to 70% of Kingston town centre, 44% of New Malden (interestingly the first area in the whole of London to bring in localised 20mph streets way back in 1991) and 36% in Chessington.

A week before Surbiton’s decision, Kingston voted to kick the can down the road by calling for more consultation… despite a major public environmental forum held at Kingston Uni in January 2020 agreeing that a boroughwide speed reduction would significantly improve road safety and boost air quality.

Final decisions by Malden & Coombe, and Chessington (technically called the South of the Borough neighbourhood area), are awaited after more localised consultation, but Surbiton has opted to go it alone regardless.

Also included in Surbiton’s 20mph zone are Red Lion Road, Tolworth, and Herne Road, Surbiton – both of which are partly in the South of the Borough district.

“I feel passionately about the 20mph speed,” said Cllr Sumner, who has a strong personal reason for wanting change as her niece was left in a coma after being knocked down by a driver who was exceeding the limit. “This isn’t a political decision; it’s a commonsense one.”

Former council leader and long-time advocate of 20mph zones Cllr Liz Green spoke in agreement, even though the pair have had disagreements on other issues in the past.

Seconding Cllr Sumner’s amendment to include major roads including Upper Brighton Road, she said: “London has moved a long way on 20mph [in recent years], and I’d have liked to see a boroughwide decision… but that’s not in my gift. Apart from the A3, everything should be 20mph.”

Cllr Sumner believes the new limit – which will be enforced by mobile police patrols, and publicised using more painted road roundels like the one in the picture, top – will improve safety for children and help create people-friendly neighbourhoods as well as making cycling and walking a more attractive proposition.

Cllr Hilary Gander said that Surbiton “needs to catch up” with modern thinking on lower speed. For every reduction of 1mph in traffic speed there is a 6% drop in road casualties, she told the Surbiton neighbourhood committee. “It’s wrong that people should have to dash across our roads.”

Cllr Malcolm Self, who was chairing the committee last time the issue was discussed at length, said: “Things have changed in five years; things have moved on. Now is the time to include all roads.”

The change, which polarises opinion more than most issues, is expected to happen some time in September.