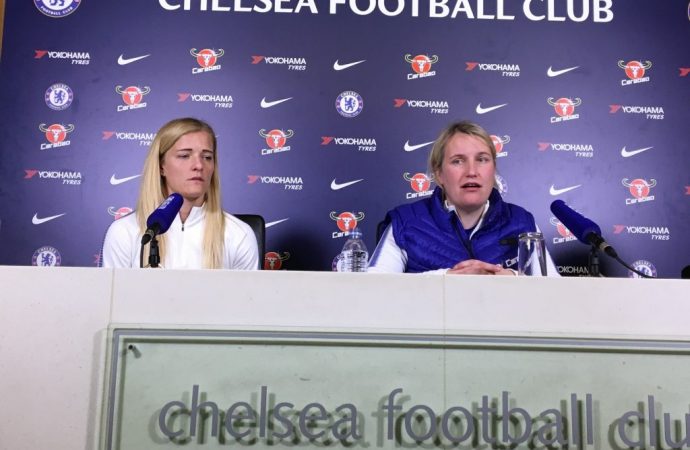 On the brink of the biggest game in Chelsea Ladies’ history, the team is ready, willing and able… despite the punishing fixture congestion that has stretched resources. Manager Emma Hayes told a press conference at the club’s Cobham training ground that preparation for Wednesday night’s Champions League second leg game against Montpellier hadn’t been ideal

On the brink of the biggest game in Chelsea Ladies’ history, the team is ready, willing and able… despite the punishing fixture congestion that has stretched resources.

Manager Emma Hayes told a press conference at the club’s Cobham training ground that preparation for Wednesday night’s Champions League second leg game against Montpellier hadn’t been ideal with so many matches in quick succession, but promised 100% effort.

Captain Katie Chapman, sitting alongside her, agreed that the two away goals from the first leg were crucial, and said her team-mates would not be resting on their laurels but would approach the home tie at Kingsmeadow with the same mindset for the first leg.

“If they score early, it changes the game,” she added, ominously. The Blues will be trying to keep a clean sheet for the first half, and then go all-out to close the game down in the second. It may well be a tense evening.

Already the crowd for Wednesday’s clash (March 28) is expected to top 3,000, so there will be a good buzz at Kingsmeadow.

Emma Hayes paid tribute to Montpellier ahead of the return leg, saying that while Chelsea Ladies were a great side on the counter-charge, the French team “are the best attacking side” in Europe.

“We have to wake up tomorrow,” she added. “One goal will make a difference to the game.”

She lamented the scheduling of matches in the women’s game in England, and warned that her early glimpse of the proposed fixtures next season gave little respite.

Continental teams are shielded from over-playing, by having pre-Champions League ties changed to factor in more rest spells.

England, says Emma, has to learn from this. “We have to talk about player protection,” she said. “Teams that play too much are 39% less likely to win.”

Katie added: “Recovery [after games] is key, and we’ve only got two or three days between games. But we’re mentally strong, and we’re in the competition that we want to be in.”

Mischievously, I asked Katie if – when she runs into first-team men’s players in the corridors at Cobham – she allows herself a little smile, knowing that the ladies are still in European competition.

“We’re one club, and we want the men to be successful,” she said, diplomatically.

Katie’s advice to her younger team-mates? “I tell the other girls to enjoy it,” she said. “We’ve got quality, there’s the pride in defending and not conceding, and we’ve got staff who push us to do our best.”

It is, Katie agrees, the biggest night in Chelsea Ladies’ history. And it’s a great opportunity to go further than the club’s ever been before. “However, they’ve got nothing to lose, and they’ll throw everything at it.”

Tickets for the floodlit Champions League semi-final leg against Montpellier at Kingsmeadow are on sale at £6 for adults, £3 concs. Visit: http://www.chelseafc.com/teams/chelsea-ladies/ticket-information.html