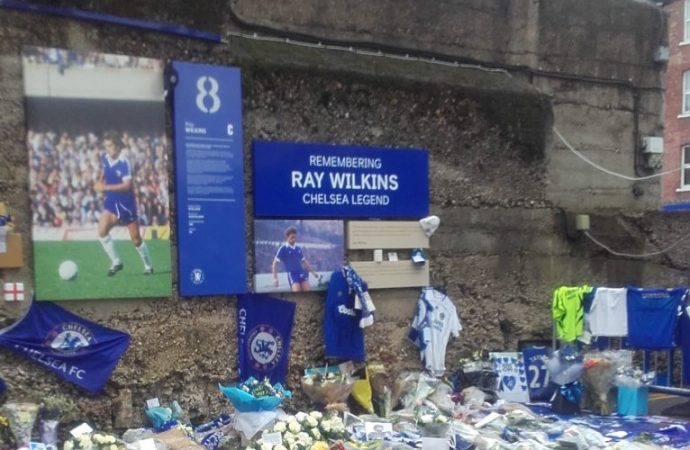 The section of the old Shed wall at Stamford Bridge which became a tribute zone to the late, great Ray Wilkins ahead of Sunday's league game against West Ham will remain open for those wanting to leave mementos until next weekend. Scarves, shirts, flags, flowers, hats, photos and notes have been building up for days

The section of the old Shed wall at Stamford Bridge which became a tribute zone to the late, great Ray Wilkins ahead of Sunday’s league game against West Ham will remain open for those wanting to leave mementos until next weekend.

Scarves, shirts, flags, flowers, hats, photos and notes have been building up for days in a spontaneous and heartfelt outpouring of grief for the Blues’ old No8, who has died at the age of 61.

Chelsea is keeping the dedicated area near the Britannia Gate entrance open for fans’ tributes until Sunday April 15, 8am to 10pm.

There is also a book of condolence for fans wishing to write messages to the Wilkins family, which will be presented to Ray’s widow next week. It is located at the back of the Bridge, in the Museum building, and is available from 9.30am to 5pm until Friday, and 9.30am to 4pm on Saturday and Sunday.

The Blues couldn’t beat West Ham in Sunday’s match – a dull 1-1 draw only really bursting into action and excitement for the final 10 minutes.

Eden Hazard, who was lively in spells, gave a further indication that he will not be remaining at the Bridge after May by making a gesture to the fans nearest him – in the lower West Stand – after groans greeted the moment he was dispossessed in the 80th minute. It was a moment which seemed to have an air of finality to it.

Now 10 points behind fourth-placed Tottenham in the Premier League table, Chelsea only have the FA Cup to aim at.

“I hope, for the Chelsea fans and ourselves, that we can achieve something,” Hazard said in a post-match interview.

“When you play for Chelsea you want to be in the Champions League every year but last year we didn’t play in it and we won the title, so sometimes a bad thing can create a good thing, but we will play [to keep the pressure on Spurs] for the Champions League, for sure.”

Chelsea’s next game, at Southampton on Saturday, is a dress rehearsal for the FA Cup semi-final at Wembley on April 22.

“We have to try and turn this around and finish the season on a high,” said Antonio Rudiger after the draw against the Irons, who seemed to spend most of the game time-wasting. “We have to go to Southampton and do our thing,” he added.

Featured: Tributes are paid to Ray Wilkins against the old Shed wall before the West Ham game. Picture: Peter Burgess