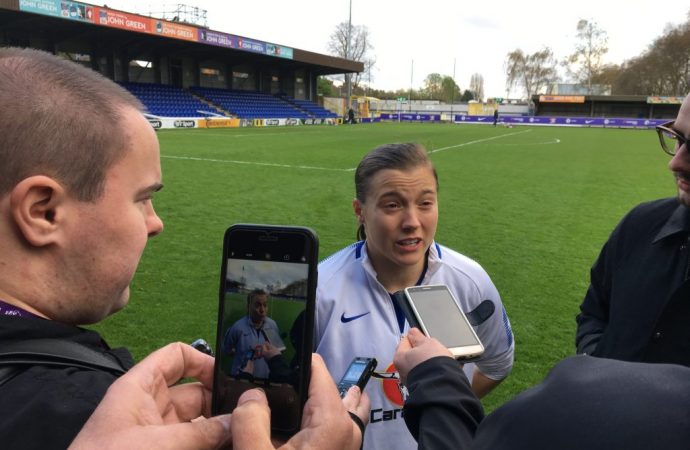 She’s becoming the poster girl of Chelsea Ladies. Despite a recurring hamstring niggle, Fran Kirby (pictured) scored the all-important brace of goals which propelled the Blues to the Women’s FA Cup final at Wembley early next month, guaranteeing an afternoon to remember for the growing army of supporters. “It’s lucky for me that the team

Despite a recurring hamstring niggle, Fran Kirby (pictured) scored the all-important brace of goals which propelled the Blues to the Women’s FA Cup final at Wembley early next month, guaranteeing an afternoon to remember for the growing army of supporters.

“It’s lucky for me that the team put the ball for me where I can go one-on-one with their keeper,” said Fran, typically modest at the end.

That Chelsea knocked Manchester City out at the semi-final stage at Kingsmeadow on Sunday underlined just how far this team have come, and bolstered confidence ahead of a difficult week in which the girls play Everton away in the league before the first leg of the Champions League semi-final against Wolfsburg.

On a cold, grey afternoon with bursts of driving rain, Chelsea were the more positive from the moment Sarah Garratt blew the whistle.

Five minutes in, left-back Magda Eriksson lofted the ball forward to Kirby, who scampered away on a superb, head-down solo run at goal, beating Ellie Roebuck one-on-one after outpacing her chasers.

City’s knot of noisy drummers in the stand were briefly silenced.

It remained 1-0 at the break, with the Blues’ back three of Eriksson, Maren Mjelde (an adaptable defender/midfielder who seems to have occupied every position bar goalie this year) and the dependable Millie Bright rebuffing everything City flung at them.

Only Nikita Parris, a girl with a phenomenal sprint, posed problems, scurrying down the City left wing… but her final ball lacked accuracy, and Hedvig Lindahl was never truly tested in the Blues’ goal.

Alarmingly MariaThorisdottir, the tall blonde midfielder, was stretchered off in the 66th minute with an ankle injury. Gilly Flaherty took her place, and did admirably.

But the day really belonged to two Chelsea strikers – the young Erin Cuthbert and the remarkable Fran Kirby… who is surely in poll position to take the various Player of the Year awards which are going at the end of the season.

Kirby’s second, and Chelsea’s clinching goal, came in the 73rd minute after she jinked round the keeper after again beating all her pursuers for pace.

Chelsea saw out the last quarter of an hour brilliantly – a source of special pride to manager Emma Hayes as the risk had been a half hour of extra time plus penalties if City had managed to draw level.

Chelsea’s comfortable win was all the more remarkable as they only had four players on the subs’ bench; Ramona Bachmann pulling out at the last moment through illness. Why no youth player or alternative substitute could be found was a mystery, but the Blues’ achievement in dismissing arch-rivals City was enhanced all the same.

Of her leg injury, which was heavily strapped after the game, Kirby said: “It’s a hamstring niggle; you get them when you’re playing so many games regularly.”

Eni Aluko is expected to start against Everton on Wednesday evening, to give Kirby a chance to recover before the European match at the weekend.

The Women’s FA Cup Final takes place on Saturday May 5, with kick-off at 5.30pm; a London derby and a repeat of the 2016 showpiece after the other semi-final saw 14-time winners Arsenal beat Everton 2-1.

The next Kingsmeadow match is on Sunday evening for the first leg of the Champions League semi-final against Wolfsburg at 6.05pm. Tickets for sale at £6 for adults, £3 concs. Visit: http://www.chelseafc.com/teams/chelsea-ladies/ticket-information.html