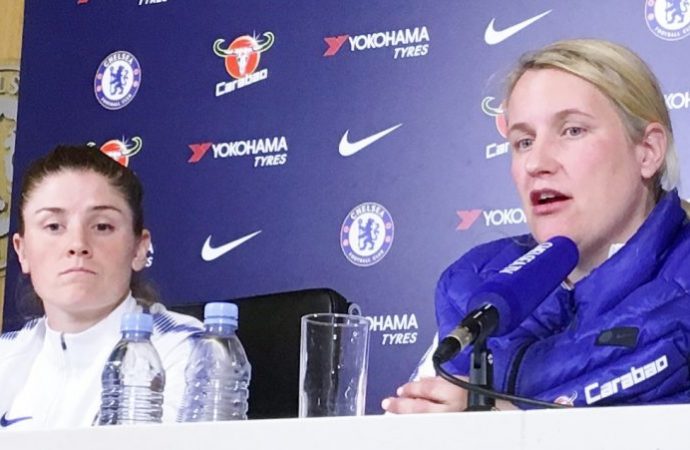 Do Chelsea Ladies fear Arsenal ahead of Saturday’s FA Cup final at Wembley? Not a bit, insisted Maren Mjelde, left, who has played in a couple of cup finals back home in Norway, but has never enjoyed the experience under the big arch before now. “Fear? No!” insisted Mjelde. “If I went out on to

Do Chelsea Ladies fear Arsenal ahead of Saturday’s FA Cup final at Wembley? Not a bit, insisted Maren Mjelde, left, who has played in a couple of cup finals back home in Norway, but has never enjoyed the experience under the big arch before now.

“Fear? No!” insisted Mjelde. “If I went out on to a pitch to fear Arsenal it wouldn’t be good!”

She and manager Emma Hayes, pictured right – who, on doctor’s orders, is not going to waddle out with the team on Saturday as she’s on the last lap of her pregnancy – are upbeat, but grounded, about the prospects for the Blues in a stadium just round the corner from Hayes’s home.

“Wembley’s my local stadium, so I’ve probably got my shortest trip of the season, which is good for my pregnancy,” she told a pre-match press conference at the Chelsea training ground in Cobham. “We’ve had success and disappointment there, but it’s an environment the majority of us are familiar with.”

Mjelde, one of Chelsea Ladies’ stand-out players this season, added: “We’ve been strong the whole year, scoring a lot of goals, and clean sheets are important to us. It’s going to be tough, but we’re a strong team. It’s my first game at Wembley and my first cup final in England. There are a lot of jealous people in Norway now!”

She added that playing in front of more than 40,000 people (tickets are being sold right up to the whistle, with kids getting in free) would be “the biggest cup final crowd I’ve played in front of”.

Her manager, sitting alongside her, said that the key to Chelsea’s performance at the weekend would be the consistency that the players have achieved in all competitions.

“If you’d said at the start of the season that we’d reach the semi-final of the Champions League, the final of the FA Cup and be top of the league with four games to go, we’d have taken that,” she said. “We know Arsenal have got big-game players who are used to performing in front of both big crowds and on the big day. It’s why cup finals are levellers.”

She said the team had put the disappointment of losing to Wolfsburg in the Women’s Champions League behind them, and were looking forward. She travelled to the game, despite doctors’ reservations, by train and car.

She will be at Wembley, but will remain in the dug-out rather than attempting any arduous waddles across the pitch with the team. That honour will go to Paul Green, assistant manager, who is likely to have a lump in his throat when he marches on to the turf as he will be following in the footsteps of his father, Bill, who led the Scunthorpe team out for a 1992 play-off at the famous stadium. Bill died in August last year at the age of 66, and was an important mentor and guide to his son, both as a player and manager.

Tickets for The SSE Women’s FA Cup Final are still available and can be purchased at theFA.com/tickets. Children can attend this season’s final for free, with adult tickets costing £15 and concessions £5. There are also half-price tickets for groups of 10 people or more.