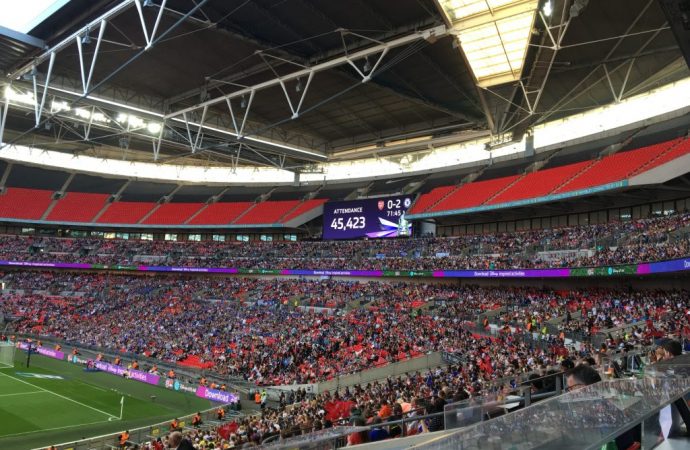 In front of a record crowd for a Women’s FA Cup final, Chelsea Ladies triumphed over Arsenal to lift the trophy. The 3-1 win was a fair result, with the Blues superior to the Gunners in almost every department. Cheered on by a Mexican wave-crazy crowd of 45,423 – average age about 16 – a

In front of a record crowd for a Women’s FA Cup final, Chelsea Ladies triumphed over Arsenal to lift the trophy.

The 3-1 win was a fair result, with the Blues superior to the Gunners in almost every department.

Cheered on by a Mexican wave-crazy crowd of 45,423 – average age about 16 – a largely forgettable first half (the BBC One television audience must have nodded off) was followed by a stirring, all-action second 45 minutes.

Two goals from Ramona Bachmann – who looked heartbroken to be subbed before having the chance to score a hat-trick – and one from super Fran Kirby were enough to snuff out Arsenal’s consolation strike and give the Blues the trophy for the second time.

It was captain Katie Chapman’s 10th FA Cup victory, her first achieved as a 14-year-old playing for Millwall! Now 35, the mother-of-three is expected to see out the season before considering her options, which could include management.

The soporific, edgy and error-littered first half, which left most fans resorting to watching a Mexican wave travelling round the stadium rather than any on-pitch action, was followed by a simply splendid second half.

With heavily pregnant manager Emma Hayes watching from the dug-out, and trying to resist the urge to leap to her feet, Bachmann scored twice in quick succession before Kirby sealed the result in the 76th minute.

Bachmann’s first goal – scored at the end where most Blues supporters were massed – was glorious, beating Sari Van Veenendaal by wellying the ball into the roof of the net after 48 minutes, following a one-two with Kirby.

Her second came 12 minutes later, cutting inside and rifling home with the assistance of a glancing deflection off Gunners defender Louise Quinn’s shoulder.

Although Arsenal pulled a goal back after 74 minutes, when Beth Mead scurried down to the byline and sent the ball into the six-yard box for Vivianne Miedema to convert, the icing on the cake came three minutes later when Kirby curled home an unstoppable left-foot strike having been fed through by a Hannah Blundell pass from the right wing.

The Blues wound down the clock professionally to see the game out, with a lot of maddening (for Arsenal) interplay between sub Eni Aluko and fellow sub Erin Cuthbert at the corner flags.

The win avenged the defeat to 14-time winners Arsenal two years ago and is Chelsea’s second FA Cup victory after the 2015 triumph over Notts County.

Hayes had sat tight, on doctor’s orders, while assistant manager Paul Green led Chelsea out on to the Wembley turf.

Arsenal’s consolation second-half goal was the first Chelsea had conceded in the Women’s FA Cup campaign this season.

Chelsea are now chasing the double with four games remaining in the WSL. Birmingham City bowl up to Kingsmeadow on Wednesday night (kick-off 7pm), while the final home game of the season is against Sunderland on Saturday (7.45pm).

Tickets are for sale for both matches. Visit: http://www.chelseafc.com/teams/chelsea-ladies/ticket-information.html