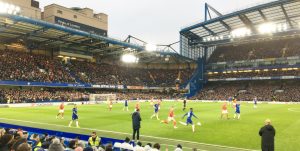 Two superb crosses from the fleet-footed Callum Hudson-Odoi, and two goals for the confidence-shorn striker Alvaro Morata, were enough to dump Nottingham Forest out of the FA Cup in the 3rd Round on Saturday at Stamford Bridge, in a one-sided tie which still seemed laboured and unconvincing at times. Manager Aitor Karanka had set up

Two superb crosses from the fleet-footed Callum Hudson-Odoi, and two goals for the confidence-shorn striker Alvaro Morata, were enough to dump Nottingham Forest out of the FA Cup in the 3rd Round on Saturday at Stamford Bridge, in a one-sided tie which still seemed laboured and unconvincing at times.

Manager Aitor Karanka had set up Forest to defend in the hope of getting a replay against the Blues, but after Ruben Loftus-Cheek was subbed shortly before half-time with a suspected recurrence of past back problems, and Eden Hazard joined the attack, it was only a matter of time.

Forest’s travelling army outsang the home supporters (who are always a slightly different complexion during cup matches), with one particularly telling jibe being “Ground full of tourists, you’re just a ground full of tourists” to the traditional Cuban air Guantanamara.

But the containment policy, with the hope of punishing Chelsea by a set-piece or on the break, only survived until the 50th minute, when Hudson-Odoi streaked down the right wing and delivered the perfect cross for Morata to score.

The forward had thought his luck was out after a golden chance was presented to him on a plate in the 18th minute, only for him to head the ball straight at Luke Steele in the Forest goal, leading to a collective groan among the 40,544 spectators who felt ‘Here we go again’.

The turning point in the game had come after half an hour, when Loftus-Cheek was felled in the box. With Hazard still on the bench at that point, there was some initial uncertainty about who would take the spot kick. Cesc Fabregas claimed responsibility because – it gradually transpired – this was his farewell match.

But Fabregas fluffed his lines, paused in his run up, then sent a tame and easily saved shot towards Steele. That gave Forest hope and belief, and the play which had been confined to the visitors’ half gradually spread out as the Championship side began moving forward.

In the 58th minute, Morata had another golden chance to score, but – incredibly – sent the ball flying over the bar from just two yards out. It turned out he was offside, but he didn’t know that at the time.

A minute later he atoned, with Hudson-Odoi again crossing from the right and Morata nodding home.

The striker, who barely celebrated either goal, was subbed a quarter of an hour later, and walked – expressionless – straight down the tunnel.

Garth Crooks, sitting alongside me in the press box, turned and said: “I know that look; he wants to be anywhere but here – he wants to leave.”

With only a couple of half-chances, Forest never looked like clawing back two goals, and the game petered out.

Fabregas had a standing ovation when he was subbed for N’Golo Kante with five minutes to go, and waved farewell to the crowd. He also ran on at the final whistle for more farewells.

Next up for the Blues, part one of the two-hander against Spurs in the League Cup on Tuesday at Wembley.