VAR is the match winner 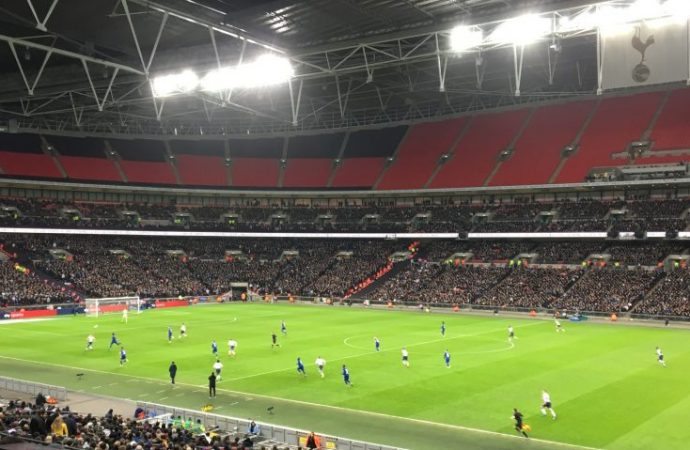 In a way, neither Chelsea nor Spurs triumphed in the first leg of the Carabao Cup semi-final at Wembley on Tuesday evening. It was a win for VAR. The video referee determined what would happen in the 24th minute of this largely forgettable match which, oddly, the Blues edged in terms of play, but not

In a way, neither Chelsea nor Spurs triumphed in the first leg of the Carabao Cup semi-final at Wembley on Tuesday evening. It was a win for VAR.

The video referee determined what would happen in the 24th minute of this largely forgettable match which, oddly, the Blues edged in terms of play, but not of finishing.

Even if it had gone on another half hour it’s unlikely Chelsea would have found the back of the net as Tottenham – already experienced at beating the Blues’ false-9 three-striker set-up – contained the threat well.

Harry Kane scored the only goal, from the spot, after a minute and a half of watching referee Michael Oliver stick his finger in his ear and stare off into the floodlights, like a mesmerised rabbit, awaiting a decision from on high.

Kane had set off at the gallop to chase an over-the-top ball from midfield. The debate about whether it was offside or not lasted a fraction of a second as the Spurs No10 collided with keeper Kepa running in the opposite direction… and suddenly Oliver had four major decisions to make in double-quick time.

Sensibly, he farmed out the dirty work to the remote refereeing team, sitting snugly in some bunker or other.

Having initially erred towards ruling out any punishment for Kepa on the grounds that he felt Kane may have been offside, Oliver reversed his ruling, declared Kane to have been illegally felled, booked Kepa and gave Spurs the penalty. Kane duly despatched.

After that, the Blues had the lion’s share of the play as Spurs operated a containment policy, largely in their own half, with the occasional dramatic break upfield to remind Chelsea that the defensive line of Marcos Alonso, Andreas Christensen, Tony Rudiger and Cesar Azpilicueta (wearing the captain’s armband) needed to stay awake.

In the second half, Chelsea had six corners to Spurs’ two, with the most dramatic coming in the third minute of second-half stoppage time, when Eden Hazard floated the last set-play of the game into the area for a scruffy clearance ahead of the final whistle.

So effectively it’s half-time overall in this fixture, with Part 2 now taking place at the Bridge on Thursday January 24 at 7.45pm.

Callum Hudson-Odoi, supposedly on his way to Germany after holding out for a better contract at Stamford Bridge, started the match, and looked dangerous in patches. He’s no polished diamond, but he has pace and a slithery ability to fly past opponents.

N’Golo Kante came close with a couple of attacks, hitting the post shortly before the break and stinging Paulo Gazzaniga’s hands early in the second half, Ross Barkley shot wide and Hazard almost troubled the Tottenham goal, but this was a match in which the second leg at the Bridge loomed increasingly large as the seconds on the giant Wembley screens ticked away, and it was no real surprise that the VAR goal in the first half was the only difference in terms of score.

As there is no away goals rule in this season’s Carabao Cup, it will be a straight fight tomorrow fortnight, with no need for calculators or abacuses.