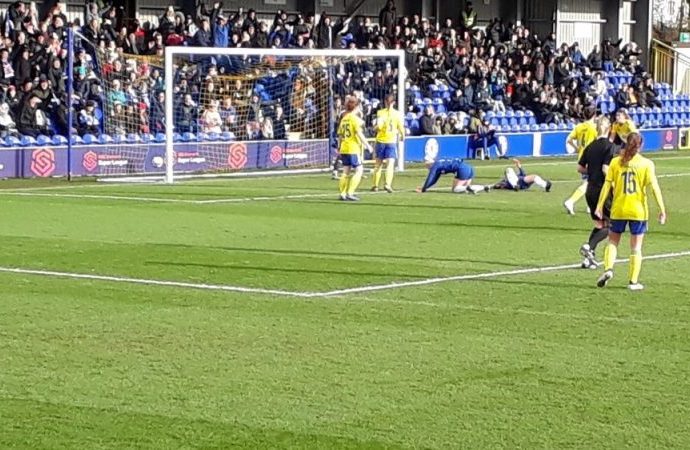 Millie Bright’s power and ability to move Chelsea forward were missed by a team who lacked the answers to a gritty and determined performance by Birmingham City on Sunday, writes Jane Grove. The 5ft 10in defender, who had picked up a knock against Reading and who still hasn’t quite recovered, watched from the main stand

Millie Bright’s power and ability to move Chelsea forward were missed by a team who lacked the answers to a gritty and determined performance by Birmingham City on Sunday, writes Jane Grove.

The 5ft 10in defender, who had picked up a knock against Reading and who still hasn’t quite recovered, watched from the main stand at Kingsmeadow as her side went down 3-2 against a team who are now level on points in the Women’s Super League table.

Chelsea started brightly when a diving header by Erin Cuthbert screamed past the outstretched gloves of Hannah Hampton after a stunning Karen Carney cross into the box on 13 minutes.

The Blues were on top, and seemed to have the measure of the game until Birmingham midfielder Emma Follis put a dent in the fender by levelling before the break – very much against the run of play.

Birmingham came out strongly after half-time and it was now Chelsea who were on the back foot. Forward Lucy Quinn took full advantage and had a punt from distance. Unluckily for Emma Hayes’ team, the looping shot dipped into Carly Telford’s net.

Birmingham held on to their lead until a free kick from Erin Cuthbert on the edge of the box sailed through the melee in the goalmouth into the back of the net. Even Stevens – game on!

It looked like the game was Chelsea’s to win, but on the counter, striker Ellen White (a former Blues player) hit home an impressive left-footed, stoppage-time volley to put a damper on the day’s proceedings and end Chelsea’s title-chasing hopes.

Manager Emma Hayes, who had mentioned in her programme notes that people were “now putting us back in the title race”, said at the end that in trying to win the game, Chelsea had thrown it away. “In the last 20 minutes we went for it and as a result we lost the game.”

With players flying back from different parts of the globe after the international break, it was really difficult to assess what kind of performance they would be able to put in.

“We dominated in the last stage, but I think we made a poor decision in the final third, turned over, and they came back and won the game 3-2.”

Hayes thought the team felt the pressure today of chasing the title – which they now had no realistic chance of winning.

“There are too few games left, this is the problem. We made mistakes in the early part of the season so we were chasing. We had to have 100 per cent record for us to have any chance, and I think the team felt the pressure of that in this game. I thought we lacked composure today. We had been playing well, we had been on a good run, but it wasn’t our day today, but not through lack of trying.

“It was a great game of football, two very competitive teams, it could have gone either way, and today that fell to the opposition.”

Birmingham now become only the second team after Arsenal to score against Chelsea in the WSL, underlining their achievement at Kingsmeadow… the ground that was still echoing from Wimbledon’s shock FA Cup defeat of West Ham the day before.

Next up for the Blues, an away trip to Everton.