Blues crash out of Conti Cup 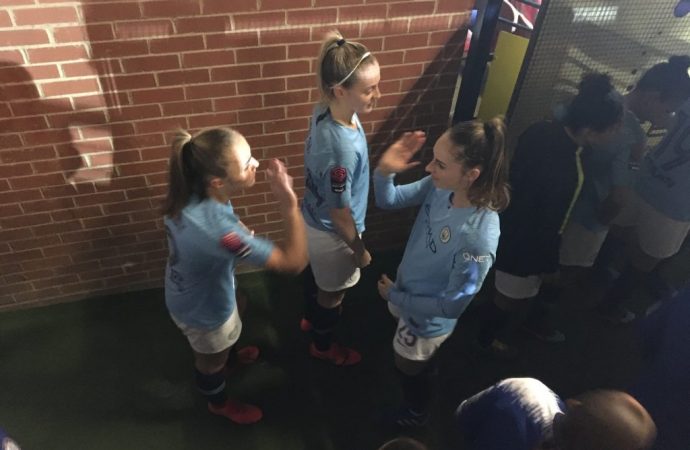 Despite trying their hardest on a soaking night, the Blues couldn’t continue their Continental Cup run against a determined Manchester City, and were knocked out 2-0 in the semi-final at Kingsmeadow, writes Jane Grove.

They’ll have a chance of revenge as early as Sunday, when they travel up to Manchester for the 1pm kick-off game in the league, ahead of the men’s teams clashing three hours later across the footbridge linking the two City stadiums.

After 10 minutes of struggling to knit together decent possession phases, Chelsea dominated the first half, but couldn’t get the breakthrough their methodical and patient build-up play merited.

Fran Kirby had a shot blocked in one of the best chances, after 10 minutes, but Erin Cuthbert couldn’t control the follow-up ball.

Cuthbert came close again on 35 minutes, when her overhead kick – from a Jess Carter cross – was well saved by England keeper Karen Bardsley. But the clearest chance came five minutes before half-time as Beth England rose to meet a cross, but steered her header wide.

The second half was only three minutes old when Deanna Cooper needlessly felled the nippy Nikita Parris in the box, and the striker hammered the penalty past Hedvig Lindahl into the roof of the net – an unstoppable spot kick.

Chelsea did their best to carve out chances in response, but England’s lob sailed over the bar, and sub Hannah Blundell’s shot was saved. The Blues couldn’t get close enough to create a real threat, however, and when Kirby did manage to scamper through for one of the most promising openings, her jinks were smothered by defenders.

City deserved their win, and it was almost inevitable that the Blues would be caught on the break as they flung everything forward in search of an equaliser. The ball was intercepted in the 81st minute, Parris was sent on her way, and beat Lindahl one-on-one to put the result beyond doubt.

It was a disappointing outcome for Chelsea, in foul weather, but the chance of redemption against this old foe is just four days away.

So City progress to the final of the Conti Cup up in Sheffield, against either Arsenal or Man U, with a Manchester derby a real possibility now.