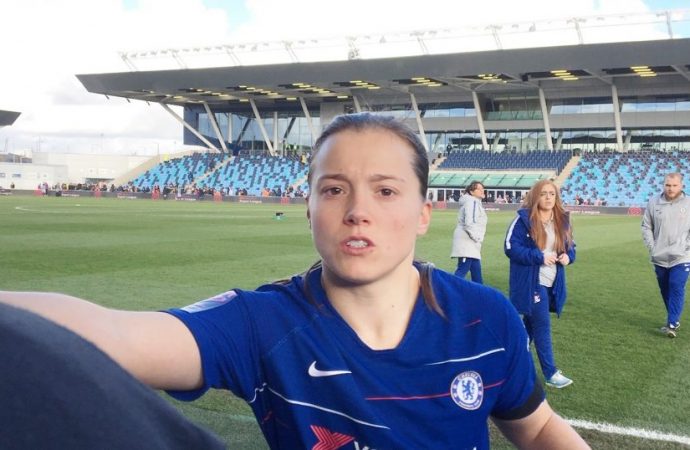 Chelsea Women proved themselves the Comeback Queens at Manchester on Sunday, clawing back a two-goal deficit in the wind-affected Academy Stadium to leave the field with a spring in their step. Manager Emma Hayes was delighted with the fightback as the second half went all Chelsea’s way… assisted by City markswoman Nikita Parris missing two

Chelsea Women proved themselves the Comeback Queens at Manchester on Sunday, clawing back a two-goal deficit in the wind-affected Academy Stadium to leave the field with a spring in their step.

Manager Emma Hayes was delighted with the fightback as the second half went all Chelsea’s way… assisted by City markswoman Nikita Parris missing two one-on-ones with Hedvig Lindahl.

It was a defiant and determined effort by the Blues, who were still reeling after being knocked out of the Conti Cup by City at Kingsmeadow four days earlier.

“It was very blowy – but it was the same for both teams, so you’ve just got to control what you can control,” said Hannah Blundell, who did an excellent job down the right wing. “We made sure we stuck together as a team; each game is always tough in its own way, but against City – especially at this ground – they make it very hard to play our game.

“We’d given ourselves a mountain to climb in the first half, but thankfully we regrouped, stuck together and we were playing for the shirt with the performance we gave.”

In the end, the 2-2 result probably suited Arsenal best as the Gunners continue to press City at the top of the table, with games running out.

As gusts of wind swirled around the stadium, Tessa Wullaert put City ahead after 12 minutes, capitalising on poor control by Millie Bright, who had been booked in the opening exchanges for felling Parris as she made one of her forays forward.

It was 2-0 after 25 minutes, Jill Scott nodding the ball down for Georgia Stanway to convert.

For Chelsea, Ji So Yun came close a couple of times, but when Parris missed the chance to make it 3-0 before the interval, you began to sense that the Blues were in with a shout.

After the break, a more determined Chelsea team emerged, and it was Ji who got the breakthrough five minutes into the second half, firing in a loose ball from the edge of the area as the ball rolled free in a scramble for possession.

After Parris had missed, and missed again, Chelsea continued to push – in front of a 3,078-strong crowd. Emma Hayes sent Fran Kirby on for Karen Carney, then Ramona Bachmann to take the place of Sophie Ingle.

With a minute of normal time remaining, Ji took a free kick after Drew Spence had been bundled over and (assisted by a big deflection) the ball sailed up and over Karen Bardsley.

Hayes said at the end: “I’m gutted with the way we started the game; it was a carbon copy of the game in midweek. We lacked confidence, we weren’t aggressive, we didn’t want to get on the ball, we didn’t look ourselves.

“So that’s what I said to them at half-time. Be aggressive, do what you’re good at and you have to show them what champions look like – and I think we did that in the second half.

“I can’t remember the last time we’ve had to dig ourselves back from 2-0 down, and that’s gutsy! You saw the quality in the second half. Perhaps [the first-half performance] centred around nerves, but if you make mistakes you’ll get punished.

“I thought it was a game of mistakes by both teams, a game of missed opportunities. So a 2-2 scoreline is reflective.”

Hayes said that the errors which led to the two City goals were as much down to poor first touches as the windy conditions. “It’s tense; there was a lot at stake. I just wanted to win the game, and I can’t hide my disappointment. It took us 45 minutes to look like ourselves.”

She said she was proud of the players, and proud of their spirit, but said Chelsea needed to start games more strongly.

Nick Cushing, the City gaffer, said: “We should have won the game. We were put under pressure but we had two great chances on the counter that we should have scored. We’re disappointed but as the coach, I get it. There are reasons why it happens and we just need to make sure we learn from it and move forward.”