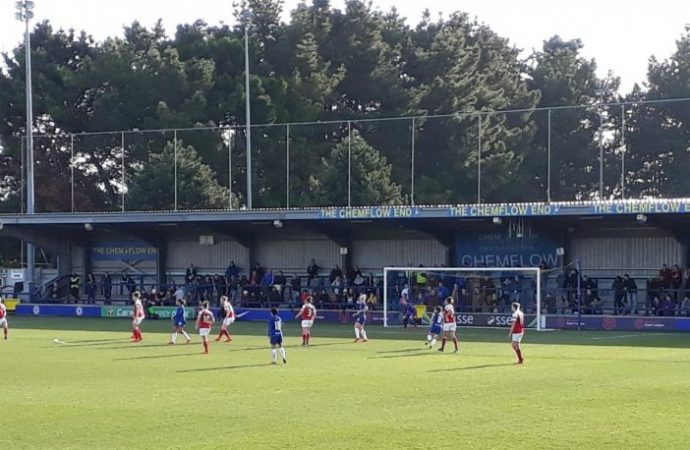 It was the kind of goal most of us can only dream of scoring – a stunning 30-yard left-foot rocket which powered past eight players, dipping and swerving in flight, before burying itself in the back of the net despite the goalkeeper getting a despairing glove to it. It made the net bulge, it was

It was the kind of goal most of us can only dream of scoring – a stunning 30-yard left-foot rocket which powered past eight players, dipping and swerving in flight, before burying itself in the back of the net despite the goalkeeper getting a despairing glove to it.

It made the net bulge, it was in the FA Cup, and it was against Arsenal. No wonder Jonna Andersson was thrilled.

“The best goal of my career? I think so!” she said as the teams left the Kingsmeadow pitch at the end of scintillating cup tie, thoroughly enjoyed by the 2,232-strong crowd, which saw Chelsea Women comfortably beat their old rivals Arsenal 3-0 to advance to the quarter-finals of the competition they love, and greatly improve the chances of another trip to Wembley to try to retain the cup that they hold.

That the Swedish international should have scored such a screamer was made all the more remarkable by the fact that she’s Chelsea’s left back, and arguably shouldn’t even have been waiting at the edge of the Arsenal area at all.

Fielding the team that drew 2-2 away at Manchester City last weekend – with the sole exception of Ann-Katrin Berger being between the sticks for the Blues rather than Hedvig Lindahl – Chelsea settled quickly against a dangerous Arsenal side (although one where injuries are mounting so much that Joe Montemurro was only able to name five subs compared to Chelsea’s seven).

Six minutes in, Erin Cuthbert picked the pocket of an Arsenal defender on the edge of the box, and slid the perfect cross in for Beth England to convert – one of two goals for the in-form striker who must surely now be on the radar of Phil Neville for a late place in the summer World Cup squad in France.

Arsenal had the best of the next 15 minutes, with Katie McCabe hitting a post, Dominique Bloodworth coming close twice, and Beth Mead looking dangerous all the time on the break. But Vivianne Miedema, usually so dependable for the Gunners, was off the pace, and for all their build-up work, the visitors couldn’t get the all-important reply.

Five minutes before the break came Andersson’s screamer, which flew past Pauline Peyraud-Magrin’s hand, and Chelsea continued their dominance in the second half, bringing on fresh legs in the form of Ramona Bachmann, Fran Kirby and Ali Riley to underline their superiority and hold on to their advantage.

A third goal, and a second for England, was a superb shot on the break, prompting the Chelsea faithful to begin bellowing their ‘England for England’ chant. She fired from distance into the roof of the net shortly before the hour mark, scoring a goal which would have been the pick of the afternoon had it not been for Andersson’s amazing zinger.

Manager Emma Hayes was not only pleased with the result, but also the first-half pace, focus and energy of the team, having criticised the players for some recent slow starts to matches. “We had to make adjustments in the first 15 minutes, but it’s something we’ve been working on and I think we caused them a lot of problems,” she said.

“The result was justified, but the performance was excellent from start to finish. I’ve said it 100 times, this [Chelsea] team is a top team. It didn’t start the season well, and we’ve been playing catch-up, but our fitness is fantastic and you can tell how much that trophy means to us.”

She said that Arsenal were successfully drawing Chelsea out of position in the early exchanges, but with some tweaks the Blues were able to take full command of the play and end up comfortable victors by the time ref Paul Howard – who only showed one yellow, despite some hearty tackles – blew the final whistle.

“The hard work, the determination, the never-say-die attitude, the graft… that’s why you hear the fans singing for the team; it must be a great team to support!

“In a World Cup year, it’s often difficult for a player to break into a team. Do I think Beth can prosper and play at England level? Yes I do. Credit to her; she deserves to be where she is at the moment.”

She described the team as a great group of people. “They’re all dreams to coach!” Rather than name the team she fancied being drawn against in Monday evening’s quarter-final pick, live on the telly, she said she was looking forward to a cup of tea.