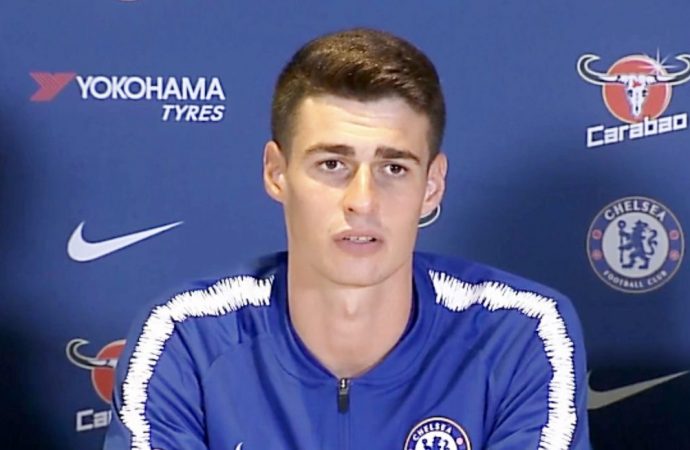 All eyes will be on the teamsheet at Stamford Bridge this evening, where Spurs are the visitors. Will it be Kepa Arrizabalaga between the sticks, or Willy Caballero? Or perhaps a maverick left-field choice, such as 39-year-old Robert Green, who is – presumably – stored in a cupboard somewhere under the east stand. To be

All eyes will be on the teamsheet at Stamford Bridge this evening, where Spurs are the visitors.

Will it be Kepa Arrizabalaga between the sticks, or Willy Caballero? Or perhaps a maverick left-field choice, such as 39-year-old Robert Green, who is – presumably – stored in a cupboard somewhere under the east stand.

To be fair to Kepa – docked a week’s pay for his infamous mutiny on the pitch during the Carabao Cup Final – he looked shame-faced as he left Wembley.

And the Blues did acquit themselves well for the whole of normal time and extra time during the final, and did have chances to snatch victory against a Man City side that had marmalised them a fortnight earlier.

Nothing really surprises at the Bridge – strange is normal, and there have been more strange things in the past 15 years than in the previous 100.

But during the pre-match press conference at Cobham this week, ahead of tonight’s crunch Premier League fixture – which could have a major bearing on Morrie Sarri’s survival in the manager’s chair until the end of the season – the coach came out with something truly odd.

Asked if Kepa would be in goal for Chelsea against Tottenham, Sarri effectively handed that critical judgement to the young Spanish goalkeeper’s colleagues in the dressing room. Having had the question translated into Italian, so he could be sure of the nuances before answering, he said: “It will be a decision for the group; for the other players.”

If ever a man needs a temporary lifting of the Stamford Bridge smoking ban, ahead of tonight’s game, it’s the arch puffer Sarri.

There is still a chance that Sarri could be given his marching orders first thing on Thursday morning, if the result proves sufficiently embarrassing that the crowd turns on the board and the manager at the end.

But this arrangement, of limping along to the conclusion of the season, is not a happy one.

The fact that Chelsea are still fighting for a top-four finish, and are still doing well in the Europa League, gives the board some hope that stability is worth preserving. Put it this way, had the Blues been dumped out of Europe and lost touch with the front-runners in the league, Sarri would by now be back in Italy.

“I spoke with Kepa, of course,” Sarri told an unsurprisingly packed press huddle in the media briefing room at a sun-kissed Cobham on Tuesday. “Then we all spoke together, because he said sorry to the technical staff. He said sorry to his team-mates; to the club.”

The head coach went on to exonerate the other players on the Wembley pitch, especially captain Cesar Azpilicueta (who didn’t appear to exercise the authority his armband confers) and David Luiz (who spoke to the keeper from behind a strategically positioned hand to shield his words from the intrusive overhead highwire camera), for their response to the failed goalie substitution, by insisting they were in shock

“It was a really unusual situation,” said Sarri. “The players were very shocked. It was impossible to react immediately, I think. The captain spoke to me immediately after the match.”

What’s inescapable is a key player disobeyed a direct order, in front of the watching world, in an important Wembley cup final, and disobeyed a reinforcing order from Sarri’s deputy, the legend Gianfranco Zola – a legend it seems unlikely Kepa will ever come close to emulating in this current ‘Fletcher Christian’ mindset.

Had Kepa acted like he did in any other workplace situation, he’d be out on the streets with a lousy reference in his gloved hand, trying to find alternative employment.

But ‘this is football’, as every exasperated Chelsea manager in the past decade has commented whenever odd things happen at the Bridge. And so much money is at stake when you’re dealing with the most expensive keeper on the planet, and an inflated head that seems to have resulted from that fact, that a hasty act would see the Blues lose bigly, as a certain American president might put it.

A win against Tottenham would push this saga out of the headlines. A draw might just do the trick. Defeat – especially abject defeat – will see serious and rapid change at the top.