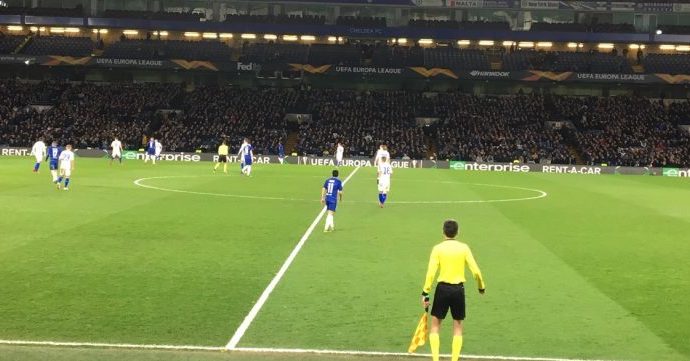 That's him on the halfway line... Pedro. The one-man dynamo - no pun intended. Pedro ran Dynamo Kiev ragged on Thursday night, his nippy runs and jinks completely bamboozling the visitors. When the whistle blew for half-time, he could have had three, four or even five goals, such was his menace. Olivier Giroud was his

That’s him on the halfway line… Pedro. The one-man dynamo – no pun intended.

When the whistle blew for half-time, he could have had three, four or even five goals, such was his menace.

Olivier Giroud was his foil, feeding balls to him and holding up play to allow his mazy incursions.

And the pair came together for the opening goal against – it must be said – second-rate opponents in this, the last 16 of the Europa League.

Chelsea should have no trouble completing the job in the second leg, and getting into the quarter-finals.

They’ve been playing with more assurance, and Morrie Sarri has turned into more of a listening coach since the chastening showdown with Kepa (again between the sticks last night) at Wembley.

But this was really Pedro’s match. He practically walked the ball into the net in the 17th minute, shimmying through the Ukrainian defence, exchanging a brief one-two with Giroud, who backheeled the ball to him, then nutmegged keeper Denys Boyko.

The little marvel had other chances to increase the lead before the break; getting barged over in the 30th minute, seeing his shot well-saved four minutes later, and firing straight into Boyko’s arm on two occasions.

The pattern continued in the second half, until Willian broke the spell after 65 minutes, taking a free kick earned by sub Ruben Loftus-Cheek on the edge of the box. Willian has a death stare that can be quite intimidating, as if he’s gone into a trance before stepping up to take a kick. He fired up and over the wall, and the ball dipped down and made the net bulge.

The issue then was simple. The Blues had used two of their subs, and had one change remaining. Sarri consulted Gianfranco Zola. At the time the crowd were baying for the introduction of Callum Hudson-Odoi, the one they want to stay at the Bridge, despite German overtures.

Zola suggested Hudson-Odoi to Sarri, after interpreting the crowd’s mood. Sarri put a nicotine chewer in his mouth and went for a quick pace in the technical area to consider it, then came back and agreed. Sarri’s started listening!

Hudson-Odoi came on in the 78th minute for Willian, and in the final minute of normal time banged home goal three, teed up by Loftus-Cheek.