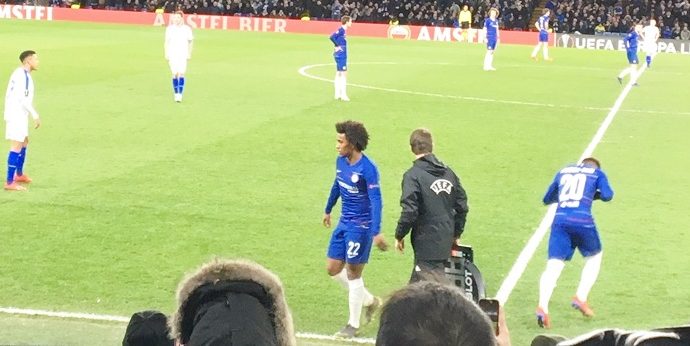 He’s never started a match in the Premier League, but Chelsea’s exciting teenaged winger Callum Hudson-Odoi – seen above coming on as a sub against Kiev for Willian at the Bridge – has joined the England squad. National manager Gareth Southgate and his deputy, the former Chelsea assistant manager Steve Holland, have been watching Hudson-Odoi

He’s never started a match in the Premier League, but Chelsea’s exciting teenaged winger Callum Hudson-Odoi – seen above coming on as a sub against Kiev for Willian at the Bridge – has joined the England squad.

National manager Gareth Southgate and his deputy, the former Chelsea assistant manager Steve Holland, have been watching Hudson-Odoi for months, and despite only getting glimpses of this young talent have formed the opinion he has a glittering future.

Now the only people still to be convinced are the members of the Chelsea board, who have been toying with cashing in their young asset and selling him to Bayern for £35m.

If everyone at Stamford Bridge comes to their senses in time, Hudson-Odoi could still enjoy a long and successful career in SW6 when want-away striker Eden Hazard is flogged in the summer for £100m to Real Madrid.

No sooner had the 18-year-old been named in the England U21 squad for the first time than Southgate pounced and popped him into the full England team ahead of the Euro 2020 qualifiers against the Czech Republic and Montenegro.

“It’s been a crazy day, but getting my first call-up is an amazing feeling,” the youngster said. “Today has been a very long day for me because I had to travel to Bristol first for the Under-21s and then getting told that I have to come over here to St George’s Park.

“But I’m delighted to get the call, and it’s a nice feeling to be here as well. I thought the U21 manager [Aidy Boothroyd] was joking. I was shocked and then when I heard that I actually had to go over, I couldn’t believe it. I was delighted. It’s a dream come true. Now I’ve got to work hard, enjoy every moment and keep working to just hopefully make an impact when I get the opportunity.”

That Southgate and Holland have more faith in Hudson-Odoi than, seemingly, Chelsea manager Morrie Sarri is yet another source of exasperation to fans who want the striker fast-tracked to the top and not sold to the first bidder, like so many of the club’s youngsters.

He hasn’t been completely overlooked, having made 19 appearances for the Blues this term, scoring four Europa League goals in the process, but if he does play a role in an England game in the coming weeks he’ll be the youngest Chelsea player in history to play for the senior national side. Glen Johnson, Jimmy Greaves and Ray Wilkins all made their England debuts at 19.

Hudson-Odoi has represented England from U16 to U19 level, notably at the U17 World Cup in 2017 when the young Lions lifted the trophy. Hudson-Odoi featured in every game at the tournament and assisted in three goals in the final against Spain having also helped Chelsea’s U18s win the FA Youth Cup and U18 Premier League, before retaining both titles the following season.