Jess gets the England call 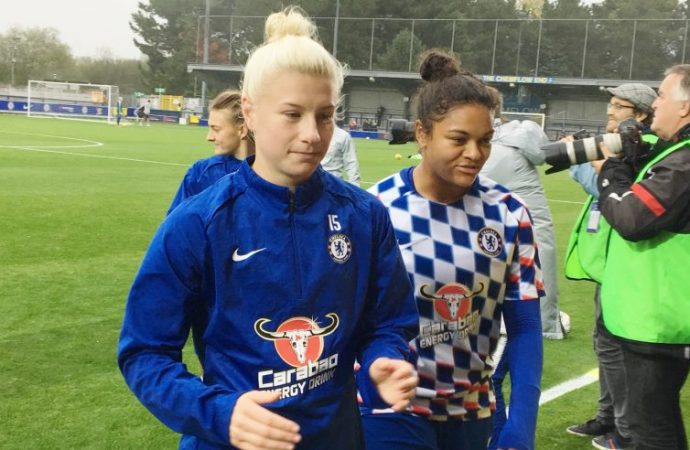 Chelsea Women defender Jess Carter has got the call to join the England U21 squad to take part in the upcoming La Manga Tournament. The 21-year-old, born in the West Midlands, signed for the Blues last summer from Birmingham City, is seen pictured right, leaving the Kingsmeadow pitch with Beth England after warming up for

Chelsea Women defender Jess Carter has got the call to join the England U21 squad to take part in the upcoming La Manga Tournament.

The 21-year-old, born in the West Midlands, signed for the Blues last summer from Birmingham City, is seen pictured right, leaving the Kingsmeadow pitch with Beth England after warming up for a Chelsea Women’s game.

England U21 manager Mo Marley has included Jess in the forthcoming La Manga U23 Tournament in sunny south-eastern Spain – part of a 20-strong group which will take on France on Friday April 5 (kick-off 3pm), Norway (Sunday April 7, kick-off 3pm) and Sweden (Tuesday April 9, kick-off at noon).

“We are all looking forward to the challenge of playing against some of the strongest U23 teams in Europe,” said the gaffer. “It’s a great opportunity for our players to experience multiple games, similar to tournament football, which is perfect for preparing our players for senior football.”

The full squad is:

Meanwhile, Phil Neville has named his full England squad for the forthcoming Road to France Series double-header on home soil, with just over two months to go before the FIFA Women’s World Cup.

The 25-player squad takes on Canada at a sold-out Academy Stadium, Manchester, on Friday April 5 before hosting Spain at The County Ground, Swindon, on Tuesday April 9 as they step up preparations for the summer’s continental footballfest.

Twenty-one members of the group lifted the SheBelieves Cup earlier this month, while there are returns for Manchester City duo Jill Scott (who withdrew due to injury last time out) as well as young goalkeeper Ellie Roebuck.

Chelsea’s Millie Bright returns, together with Jade Moore of Reading, after both sat out the USA tournament as part of the long-term management of their return to full fitness.

April’s opponents are also preparing for the World Cup finals. Fifth-ranked Canada will provide a stern test before an emerging Spain side head to Wiltshire, the first Lionesses fixture at the venue since their 4-0 win over Slovenia in September 2013. Both matches will be broadcast live on BBC4 and BBC 2 respectively.

Head coach Neville said: “We’re looking forward to playing in front of our fans in different parts of the country once again. Our support is brilliant. The fans have backed us and hopefully we can put on a good show.

“We’re expecting two tough matches but we need to be tested as we step up our preparations for the summer. Winning the SheBelieves Cup was fantastic but we’re now looking to improve and push on further. As ever, picking the squad was really tough due to the strength and depth of talent in our ranks.

“We have four matches before flying out to France and I want to emphasise that the door is not shut to any player with ambitions of making the World Cup squad.”

Tickets are £1 concessions, £10 adults, at the-fa.com/EsnsOp