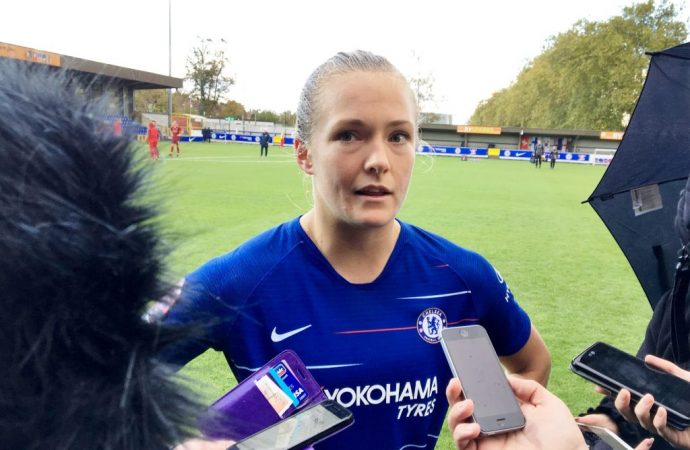 The players of Chelsea Women are trying to restore team-mate and defender Magda Eriksson’s self-confidence after her freak own goal in stoppage time dumped the Blues out of the Women’s FA Cup at Manchester’s Academy stadium. It was a cruel end to a game that Chelsea had dominated, and denies the Blues another expedition to

The players of Chelsea Women are trying to restore team-mate and defender Magda Eriksson’s self-confidence after her freak own goal in stoppage time dumped the Blues out of the Women’s FA Cup at Manchester’s Academy stadium.

It was a cruel end to a game that Chelsea had dominated, and denies the Blues another expedition to Wembley to contest a trophy they adore.

“We contested the game, we were confident throughout, and we didn’t even get out of second gear for most of the time,” said manager Emma Hayes after the 1-0 defeat at the cold, windswept, draughty stadium on Sunday. “To lose that way for a player who’s been outstanding this year… I’m just gutted for her, but that’s the way it goes sometimes.

“We have to stick together as a team, but it’s a cruel way to end a game. What can you say [to her]? There’s a million games she’s kept us in this year.”

For the 25-year-old Swede, pictured, nothing could console her after her wayward sliced clearance – with no opposition player near her – flew up off her boot and looped over Ann-Katrin Berger in the Chelsea goal. Ironically, Eriksson had enjoyed a solid, dependable match throughout the 90 minutes, while her colleague Berger seemed to flap and flail and stumble in the chilly, gusty conditions.

Fran Kirby came close to scoring in the first half, during the first quarter of an hour, but City and England keeper Karen Bardsley – who did her selection chances no harm with a good performance in front of England manager Phil Neville – was equal to it. Georgia Stanway came closest for City in the 36th minute, the ball shooting just wide of the post.

A minute later, Berger got into all sorts of trouble, stranded on the edge of her area, allowing Nikita Parris a free shot at an unguarded goal, admittedly from a tight angle. It was the only time Eriksson seemed to get in a twist, with uncertainty between her and Jonna Andersson as to who should clear a loose ball.

In the second half of this Women’s FA Cup semi-final – a free-flowing end-to-end match, but with both sides fearful of losing and playing in an uncharacteristically cautious style – Chelsea dominated. Karen Carney and Erin Cuthbert swapped wings, with Carney operating down the left, and it freed up space and posed City problems.

A flying Kirby header on 76 minutes hit the bar, and three minutes later Cuthbert struck a post. Late substitutions seemed to make little difference, and as the game went into injury time it seemed certain extra time, and possibly penalties, would be needed to see who would face West Ham (who beat Reading on pens earlier in the day) at Wembley in the final.

Then disaster struck. A seemingly innocuous ball was fired into Chelsea’s area, with no City players close to following it up. But instead of either letting it go or leaving it for the keeper, Eriksson instinctively stuck out a leg, and the ball bounced up in the air and into her own net.

In floods of tears at the end, she was hugged and enveloped by team-mates and opponents alike – but it will take her a while to get over this disappointment.

Still looming for Chelsea, the only realistic hope of glory – a stern two-leg test against Lyon, with the first leg in France this Sunday afternoon, and the second at Kingsmeadow on Sunday April 28 at 2pm.

Hopefully Hayes will pitch Eriksson right back into the thick of the action, so she can exorcise her demons and smile again. Hayes was perfectly correct in her post-match analysis; Eriksson has been a reliable, dependable servant all season, and it’s a shame that she will shortly face the summer reliving in her mind that unfortunate, freaky, fluky final minute and a half of the game at Man City.