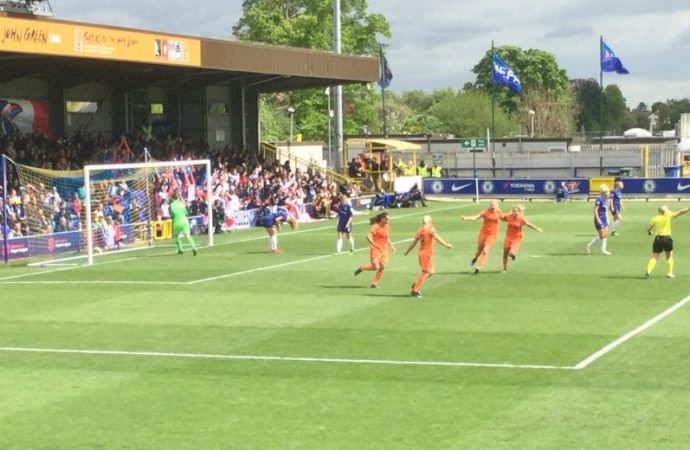 Women’s manager Emma Hayes, holding up her thumb and fingertip with a gap which barely let in daylight. The Blues drew 1-1 with Lyon in a thrilling second leg of their Champions League semi-final at Kingsmeadow on Sunday afternoon, but lost 2-3 on aggregate, despite the players giving everything. As they slumped to the ground

Women’s manager Emma Hayes, holding up her thumb and fingertip with a gap which barely let in daylight.

The Blues drew 1-1 with Lyon in a thrilling second leg of their Champions League semi-final at Kingsmeadow on Sunday afternoon, but lost 2-3 on aggregate, despite the players giving everything.

As they slumped to the ground exhausted at the end of 90 minutes, Hayes was left to reflect on the fact that Chelsea will miss out on European football next season, taking most of the blame on herself… but also risking the wrath of Uefa with some fierce criticism of the standard of refereeing by the Swedish official Sara Persson.

Ahead of the match she had called on the crowd to “be the 12th man” for the team, and was rewarded with a record 4,670 attendance, and the noisiest reception any Chelsea Women team has had, with clappers, hooters and even a brass band.

The Blues got off to a slow start. “We took too long to get going. I wanted an aggressive start and didn’t get it,” said Hayes.

Eugenie Le Sommer scored for the visitors after 17 minutes, sliding the ball under Blues keeper Ann-Katrin Berger with the help of an unlucky deflection off Maren Mjelde.

Moments later Chelsea had a good shout for handball in the Lyon penalty area.

“I’m going to take a fine for it, I thought the referee was horrendous,” said Hayes. “That always sounds a bit ‘sour grapes’, but you really want strong officials in big games if you get a 50:50 moment that looks like a penalty with a handball. If hands are outside their natural position, it’s a penalty, and it wasn’t called.

“I just don’t think she managed and controlled the game; I think she was scared of them.

“I thought she struggled. Once you start playing games at high levels you want officials that officiate at high-level games. Then they can see things quickly, and I felt from the off that was going to be an issue.”

The Blues achieved parity on the day thanks to another controversial moment shortly after the half-hour mark.

Erin Cuthbert was fed the ball by player-of-the-match Ji So-Yun, but was tripped by Delphine Cascarino on the edge of the box. Cascarino was only shown a yellow card.

“I tried to stay on my feet; in my opinion it’s a goal-scoring opportunity,” said Cuthbert at the end.

From the resulting free kick, Ji’s exquisite free kick sailed over the Lyon wall and straight into the goal.

In the second half, despite bringing on Beth England and Drew Spence to increase the goal-scoring opportunities, Chelsea couldn’t get the all-important goal to level the tie on aggregate.

Cuthbert was in tears as she shared her thoughts at pitchside, five minutes after the final whistle.

“We should be proud of ourselves today, you know. We’ve got a record crowd, but sometimes it’s just not meant to be,” she said between sobs. “You work so, so hard all season. We’re out of the FA Cup, we’re out of the league – we knew the league was almost gone by October – and we really tried to focus on the Champions League, and we can go toe-to-toe with a club like Lyon, the five-time champions. We’ve matched them.

“We’ve still got two league games left this season, but it gives us great confidence for next year. Obviously we won’t be competing in the Champions League, and we know how hard it is to compete in all four competitions.”

For Hayes, the disappointment was also clear to see. “I’m gutted,” she said. “It’s probably the story of the team’s season; we’ve improved, but unfortunately we’ve been too much of a ‘nearly team’ this year.”

She said that the better team had lost. “We’ve got the best fans in the world. I’m proud of them,” she said of the record Kingsmeadow crowd for a women’s football game. “They’ve brought an atmosphere to women’s football I’ve never seen before in this country. They know that the team are fighting for the shirts, and when you’re a supporter of a football club and you know that your players are putting absolutely everything into that, you’ll pay to come and watch that.”

So Lyon go through to a fourth Champions League final on the trot, facing Barcelona in Budapest on May 18.