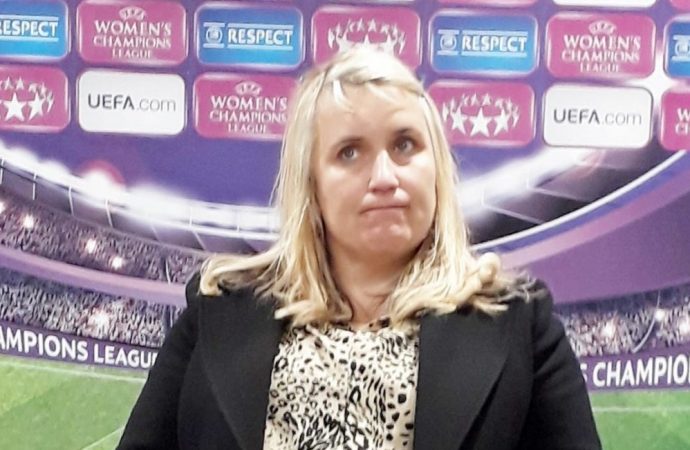 Chelsea Women’s manager Emma Hayes wants Uefa to expand the Women’s Champions League to accommodate more of Europe’s professional teams. She has called on European football’s governing body to admit the top three teams in England – and other major European countries – to compete in the knockout tournament, rather than two, as at present.

She has called on European football’s governing body to admit the top three teams in England – and other major European countries – to compete in the knockout tournament, rather than two, as at present.

This season only Arsenal – newly crowned Women’s Super League champions – and Manchester City qualify for next year’s Champions League. If Chelsea win both their remaining away fixtures, at Yeovil and Reading, they would finish third.

The Blues were knocked out of this year’s Champions League 2-3 on aggregate over two legs, despite drawing 1-1 with Lyon at Kingsmeadow on Sunday in front of a record crowd for a women’s match at the ground.

“As the [Champions League] competition keeps progressing, it really is time for the top countries in Europe to have at least three teams in the tournament,” said Hayes. “It’s not just England, the same can be said of Spain and France and Germany.”

She believes an expanded Champions League would encourage more teams to become professional, and would accelerate the already rapid development of the women’s game.

She also feels that European football, and its attendant glamour and increased profile, rewards clubs which have put their own money into developing women’s teams.

“I think the quality is now there for Uefa to review that,” she said. “We’ve been pushing for it for two years.”

She conceded that some people might think she was calling for an expansion from two to three slots for English teams to be linked to the fact that Chelsea are tipped to finish in third place, and would benefit from such a change, but she insisted that wasn’t her motivation.

“I know it’s easy for me to say as we’re not in the competition next year, but I think there should be more spaces. France has five full-time professional teams, we have 12 in this country.”

She wants the competition as a whole to expand, rather than the leading European countries to gain extra places at the expenses of smaller countries with more limited leagues.

“The quality in the product is such that perhaps they have to make the competition bigger rather than take away spaces from smaller countries.

“The evolution of this competition has to be the next big priority because of the investment that’s going in from clubs in countries all over the world,” she added.

Uefa is considering modifications to the Women’s Champions League, with the final in Budapest being contested between Lyon (reigning and five times champions) and Barcelona.

The governing body is conscious that attendances are increasing – in some cases dramatically – and it wants to use the prestigious tournament as a catalyst for change in the women’s game across the globe.

In the domestic competition in England, Manchester United will add spice and interest when they climb up from the Championship to the WSL, leading to bigger audiences in stadiums and on television. The league will be sponsored – by Barclays – for the first time in August, bringing in more revenue.

Newspapers and websites are taking the women’s game more seriously, with regular reporting, although the rise in interest at Chelsea, Arsenal, Man City and Man Utd is not yet mirrored at all grounds, with some matches attended by only a few hundred supporters.