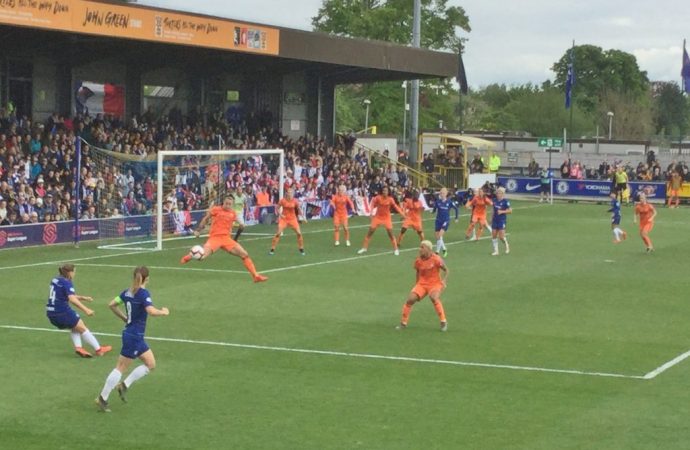 Chelsea Women’s manager Emma Hayes has one of the toughest tasks on her hands over the next few days – keeping her squad focused and fighting for the final two league games of what has been a bittersweet season. The fact that, in the great scheme of things, the matches are almost meaningless in terms

Chelsea Women’s manager Emma Hayes has one of the toughest tasks on her hands over the next few days – keeping her squad focused and fighting for the final two league games of what has been a bittersweet season.

The fact that, in the great scheme of things, the matches are almost meaningless in terms of outcome makes it hard to lift a side that less than a week ago went toe-to-toe with the reigning European champions, Lyon, in the Women’s Champions League.

But Yeovil away on Tuesday night, and Reading away on Saturday week, are still important in terms of making a statement about future intent and starting on the long summer road to the 2019-20 season – a season that will be the first backed by a major sponsor, Barclays, increasing the financial rewards on offer, but also raising the women’s game’s profile.

Hayes is keen to demonstrate that her team will be professional and ruthless to the very end, to cement third spot in the WSL table and finish the season on a winning high.

She knows it will be tough to sit out the final of the Women’s FA Cup at Wembley this weekend, between Manchester City (only there because of a freak stoppage-time own goal against Chelsea) and West Ham, but she’s philosophical (as ever), and determined that her squad will learn lessons from every experience, good and bad.

“This isn’t the end of the world; we’ve got a great opportunity to keep building on the work that we’re doing,” Hayes said in the first post-match press conference to be staged indoors at Kingsmeadow after the Lyon game on Sunday, with proper Uefa signs on display, a French translator provided and television cameras at the back of the room. “It doesn’t always mean we’re going to win trophies every single season, but we were that close to being in the final.”

Hayes described herself as “gutted” after the match. “It’s probably the story of the team’s season; we’ve improved, but unfortunately we’ve been too much of a ‘nearly team’ this year.

“We’ve gone toe-to-toe with the champions of Europe, we’ve frightened the life out of them. We deserve to be in the final, but it’s not about that. It’s about goals. They win you games, or they lose you games, and their [goals] column is greater than ours.”

She will be anxious to improve the start that Chelsea Women made against Lyon when the team travel down to Yeovil for the Tuesday evening match, which has been switched from Dorchester to Huish Park to accommodate increased numbers – another sign of the game’s growing popularity.

Kick off, on May 7, is 7.45pm. On Sunday Chelsea Women managed to attract a record 4,670 to Kingsmeadow… a figure which nearly equalled AFC Wimbledon’s 4,850 attendance the previous day when the ground-sharers beat Wycombe in a crucial bottom-of-League One fixture which saw the Dons move out of the drop zone.

Incredibly, the Chelsea Women v Lyon attendance was higher than three of the League One men’s fixtures, and higher than six of the men’s League Two fixtures, vividly demonstrating the growth in the women’s game.

“We took too long to get going [against Lyon],” said Hayes. “I wanted an aggressive start and didn’t get it. We made an error in a clearance, and they got another own goal.”

Although the ball did change direction and flew under Blues keeper Ann-Katrin Berger, most of the hacks in the press box at Kingsmeadow marked the Lyon goal down as being scored by Eugenie Le Sommer. Analysing later replays, it remains debatable whether the ball was goalbound when it took a nick off Maren Mjelde’s heel.

Hayes wants to build on the wholehearted attitude shown by Chelsea right to the bitter end against Lyon. “There was a good spirit at half-time,” she said, recalling the mood in the dressing room. “We created chances, we hit the post, Drew [Spence] came close at the far post… I can’t be critical; my players ran their [expletive deleted!] socks off for me today. They’ve been brilliant and I’m proud of them.”

She also has to carry the team’s gritty outlook forward to Saturday May 11, when Chelsea travel to Reading to face a team which has been one of the WSL surprise successes of the past season at 12.30pm.

But Hayes, and the Chelsea Women’s team, fear nobody. “I told the players that they made Lyon look average,” the manager said after the Champions League disappointment. “Lyon’s seven-year dominance, in my opinion, is massively threatened and the rest of European football has come alive. It’s the start of a new era in the women’s game; we just would have liked to have progressed and put another nail in their coffin today.

“I love watching them when they take the handbrake off and they play with the Chelsea spirit. Our players are becoming big names across Europe, and every single one of them can hold their head up, even though they’re absolutely distraught. The better team has lost. If Kaz Carney’s shot had gone in, there’s no way they’d have recovered in extra time – they were gone! Lyon’s best player in both legs was their goalkeeper. What does that tell you?”

Hayes has shouldered the responsibility for the Blues stumbling before reaching the final – harshly blaming herself for having a baby!

“It’s my fault, not the players’. I had a baby, I wasn’t at my best at the beginning of the season. It’s my responsibility that the players didn’t produce the performances in the early part of the season,” she insisted.

“Having a baby’s really, really tough, and to do my job eight weeks after giving birth to the level that I expect of myself means that I’m human, and I really wasn’t good enough for the team.”

Looking ahead to August, she added: “I have to make sure I get fresh and ready to make sure I’m at my best so that there are no excuses from the off.”