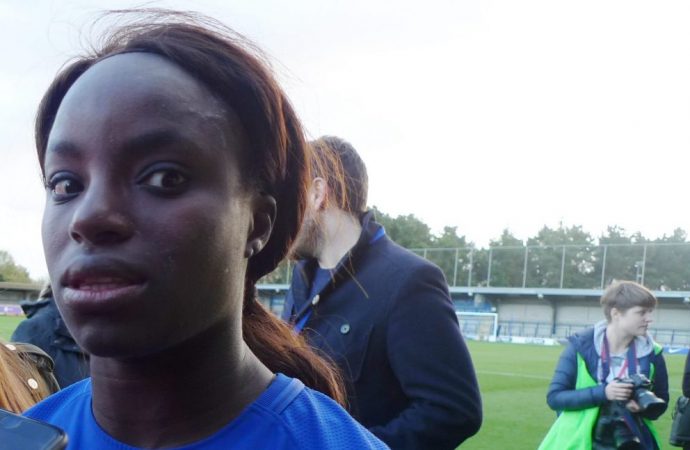 Counterattack! That's the simple advice of four time Women's FA Cup winner and ex-Blue Eni Aluko as underdogs West Ham prepare to face the might of overwhelming favourites Manchester City at Wembley this afternoon. Last year's record crowd for a club contest between women’s teams was set last year as 45,423 turned out to see

Last year’s record crowd for a club contest between women’s teams was set last year as 45,423 turned out to see Chelsea beat Arsenal… but that total has already been exceeded as more than 52,000 tickets have been sold for Man City v West Ham in the SSE Women’s FA Cup final.

Boasting ex-Blues Gilly Flaherty (the Irons’ captain), Claire Rafferty and Becky Spencer, the West Ham team are the ones that Chelsea supporters will instinctively cheer on.

West Ham are annoyed with the Premier League for not shifting the Hammers’ men’s game today – at home to Southampton – so supporters wouldn’t be torn between attending one or the other, but the league refused to move the match to avoid a clash.

City are clear favourites, but as Eni Aluko warned in her Guardian column on Friday, the Hammers have a good shout, provided they don’t let the occasion get to them.

“I was just 18 when I played my first final, against Everton,” said Eni. “It was my first taste of success; my first medal. I wasn’t nervous at all that day, just excited to get out there and play. I’ve played in five FA Cup finals, and won four.

“One thing I’ve learnt is that the way you approach the game is incredibly important. You’ve got to enjoy the occasion, but you have to do that in the right moments.

“On the day of the game, feeling overwhelmed isn’t going to help you perform. When I played for Chelsea, our manager Emma Hayes prepared the team very well. We visited Wembley a few days before the game, soaked in the atmosphere, took our pictures, dealt with our emotions, so on the day of the final we could just concentrate on the match.

“Top teams like Man City will be more prepared to deal with the crowd because their players will have experienced it at international level.

“Tactically, I think they have to set up very defensively, try to curb City, grow into the game, play on the counterattack and take advantage of set pieces.”

Could West Ham spring a great surprise? They are 90 minutes away from what could be the greatest moment of the club’s history.