She’s a girl with balls! 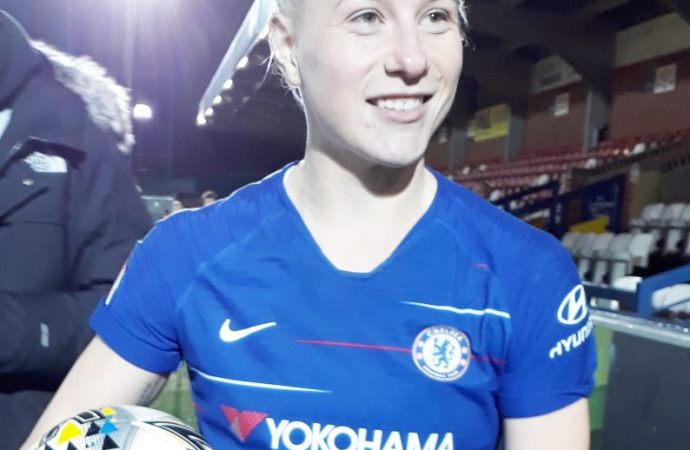 Beth England’s collection of match balls is growing! The Chelsea striker scored a hat-trick as her team swept aside relegated Women’s Super League strugglers Yeovil in the Blues’ penultimate game of an eventful season, running out 8-0 winners.

Yeovil simply couldn’t contain a rampant Chelsea, as manager Emma Hayes rang the changes in team selection, including a welcome return for Maria Thoridottir – absent for six months after being stretchered off at Kingsmeadow in the autumn with serious concussion.

The team put down a marker in the fourth minute with England’s first goal, and it was 5-0 by halftime. Erin Cuthbert – the only starter in the Blues line-up who played against Lyon – scored the second in front of 843 spectators… failing to break the Huish Park women’s record gate of nearly 2,000 against stiff TV opposition as pubs packed out for the Liverpool v Barcelona Champions League second leg thriller.

But while Liverpool men were scoring four, Chelsea Women managed eight, inflicting Yeovil’s heaviest defeat of a very difficult season for the under-pressure team. As well as England’s first-half hat-trick (accompanied by the inevitable chants of England for England from the Blues fans who had made the journey), Cuthbert scored two, Fran Kirby scored two in the space of three second-half minutes, and Adelina Engman – the supply line for many of the Blues’ goals – added another.

In goal for Chelsea, Carly Telford, who has been confirmed in the England squad for France next month in the World Cup.

“It was ruthless, clinical, at times – the things we’ve lacked throughout the season,” said Hayes at the end. “I’m really happy with Beth’s season overall. 20-plus goals is a great return. She’s growing in stature. The next objective is really to push into the England squad and I think that will happen after the World Cup, especially if she produces performances like she did tonight.”

Chelsea’s final league game of the season is on Saturday May 11, away to Reading at Adams Park (kick-off 12.30pm). The Yeovil result means that a draw against Reading would guarantee Chelsea third spot in the WSL table. Defeat would allow Birmingham City to leapfrog into third… and the Brummies are away at (you’ve guessed it) Yeovil.