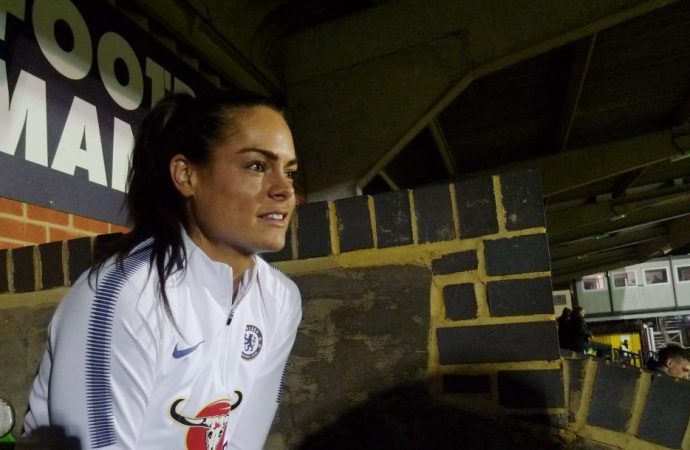 Former Blue Claire Rafferty is retiring from football at the end of the season, writes Jane Grove. The two-time WSL winner and England international will play her last game for West Ham against Brighton and Hove Albion at Rush Green stadium on Saturday afternoon. “Having thought long and hard about my decision, I have taken

Former Blue Claire Rafferty is retiring from football at the end of the season, writes Jane Grove.

The two-time WSL winner and England international will play her last game for West Ham against Brighton and Hove Albion at Rush Green stadium on Saturday afternoon.

“Having thought long and hard about my decision, I have taken the choice to retire at the end of the season,” said the defender. “It has not been an easy decision to make; I love playing football and it will be strange to not do this every day after this weekend, but I feel this is the right time for me to move into the next stage of my life.”

She left Chelsea to join West Ham last summer, and appeared 22 times in all competitions for the Irons.

She started for the Hammers in last weekend’s SSE Women’s FA Cup Final, with her leadership on and off the pitch a key component for West Ham in the club’s first season as a professional women’s side.

“Saturday’s game will be my last ever. I’ve made the tough decision to retire at the end of this season. I’ve had a lot of injuries over the years that have taken their toll,” she said. “Football has brought me so much joy and many incredible opportunities, but most importantly I have made amazing friendships that will last a lifetime.

“I hope that I have helped change the landscape of the women’s game, and will continue the fight for equality from a different angle.”

At heart, however, Raff was a Blue, having spent 11 years with Chelsea, helping the club become one of England’s top women’s football teams, winning two doubles – the FA WSL and FA Cup in 2015 and 2018.

Tributes have been pouring in from across the women’s game in response to today’s news, underlining the defender’s popularity. Claire’s former Chelsea team-mate Hannah Blundell said: “What an amazing career you’ve had. I feel so privileged to have shared the football pitch with you for so many years… and winning the first ever trophy for this club together. You’ve taught me so much not only on the pitch but off it too, and I can’t thank you enough! You’ll be a legend, and a Blue, forever.”

“Helping West Ham get to their first ever FA Cup Final was an honour, and what a way to sign off my career,” Rafferty continued. “I’ve been fortunate enough to win two doubles in an 11-year spell with Chelsea, make over 100 league appearances in the WSL and also represent my country.

“I want to take the opportunity to sincerely thank every player, coach, member of staff and supporter I’ve had the honour of working with during my career.”

Hammers manager Matt Beard worked with Raff at Chelsea before bringing the left-back to West Ham. He said: “Claire is a player who I have got to know well over the years and she has proven herself to not only be a great professional, but a model ambassador for the women’s game.

“She has been a privilege to work with, both at West Ham and at Chelsea, and I wish her every success away from football.”