The Boys’ Own record-breaker 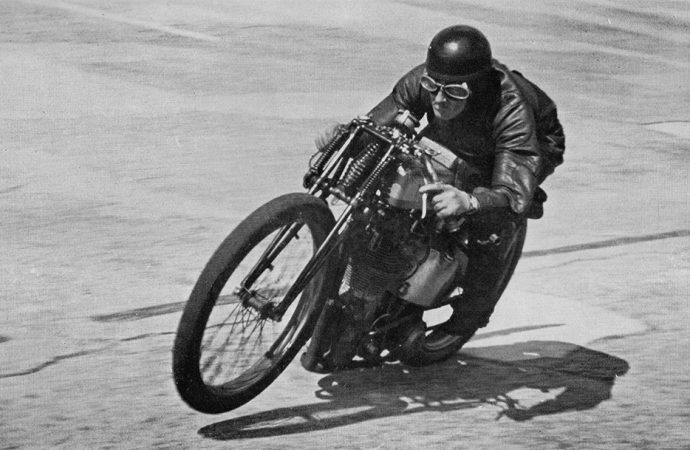 Noel Pope, Surbiton’s forgotten record-breaker, was fastest around the famous banked Brooklands circuit – an achievement which can never be bettered. His 124.51mph lap on a supercharged Brough Superior motorcycle on July 4 1939 will stand for all time, as the track near Weybridge never reopened after the war. He is also a key figure

Noel Pope, Surbiton’s forgotten record-breaker, was fastest around the famous banked Brooklands circuit – an achievement which can never be bettered.

His 124.51mph lap on a supercharged Brough Superior motorcycle on July 4 1939 will stand for all time, as the track near Weybridge never reopened after the war.

He is also a key figure in local journalism, setting up the Surbiton News in the autumn of 1959 – a newspaper which evolved into the Kingston Borough News.

Born in Liverpool’s suburbs in 1909, he was given the middle name of Baddow, the stage name of his father, a professional music hall ventriloquist who performed with a dummy called Tim.

Away at boarding school, he looked through the railings and saw Lawrence of Arabia whiz by on a motorcycle… determining there and then to devote his life to racing.
His first motorbike was an old side-valve Matchless, followed by an ancient Douglas which he bought for 10 shillings.

He studied engineering at University College London, but had to leave and finish his diploma at another institution after being being fined £3 for obstructing a PC in 1930 during rag week!

A motorcycle addict, he raced professionally, setting his famous all-time lap record at Brooklands – a Boys’ Own hero for a generation of thrill-seeking youngsters.

On his 21st birthday, Noel part-exchanged his old Matchless for a 350cc Zenith, striking a deal with Comerfords of Thames Ditton which began a long association with the company which sponsored him for nearly every Isle of Man TT event.

In 1933, he raced at Brooklands as part of The Dittons Motor Club team. The bumpy track was, he wrote, like a camel, his steed rearing, plunging and shuddering.

Later that year, despite having a damaged wrist, he rode in the Manx Grand Prix, skidding on a pile of cow dung and sliding along the road on his back, while watching his machine bounding along the wall alongside the road.

During the Second World War he served in the Royal Army Service Corps, was evacuated from Dunkirk, fought in North Africa and took part in D-Day.

Resuming racing, he made an unsuccessful bid to beat the world land speed record in September 1949, on the Bonneville Salt Flats in Utah, again with Comerfords backing. At 150mph he crashed his Brough, a streamlined version of the one he’d used for the Brooklands record 10 years earlier, and had to abandon the attempt.

He wrote an autobiography, Full Chat, published in 1952; the title being a synonym for maximum throttle.

An active member of Kingston Sub-Aqua Club, he wrote science fiction, launched the Surbiton News in 1959 (a decade later it became the Brighton Road-based Kingston Borough News), was vice-president of an avant-garde art group and president of Kingston and District Motorcycle Club.

I first met Noel, who lived in Surbiton until his death in 1971, in the early 1960s. He was the president of the Kingston & District Motorcycle Club, of which I am still a member. His scrapbooks are held in the library at Brooklands Museum.

Describing the infamous bump on the circuit at Brooklands, Noel wrote: “It must be faced head-on, dead in line with the Railway Straight, or you will land the wrong way round after the leap. So you poise yourself on the footrests and make sure that you have an even pull on each handlebar. You take the leap. You live through a breathless split-second in mid-air, wondering if you will land square; then thrill with relief and delight as you feel the wheels touch and take ground faultlessly.”
He recalled that after three miles, the motorcycle “smelt and made noises like a fish and chip shop”.

Despite racing all over Europe (in a meeting at Bern, Switzerland, he hit an official – but was exonerated at the subsequent inquiry), Brooklands held a fascination for Noel. “I suppose I was a complete addict for the place,” he said.

He married in September 1940 at St Matthew’s, Surbiton; his bride being Daphne Dupont, 22, of Southborough Road.

In August 1941 she gave birth to their son, Lawrence, followed two years later by Timothy; the first named after Lawrence of Arabia, the second after Noel’s dad’s ventriloquist dummy!

Later the Pope family lived at 16 Bond Road, before Noel and Daphne separated in the early 1950s. At the time of his death in 1971, Noel lived at 8c The Crescent, close to Surbiton’s clocktower. The wake was at the (now-demolished) Plough, Ewell Road.
<
Noel Baddow Pope, born Toxteth December 24 1909, died March 23 1971 at Surbiton Hospital. 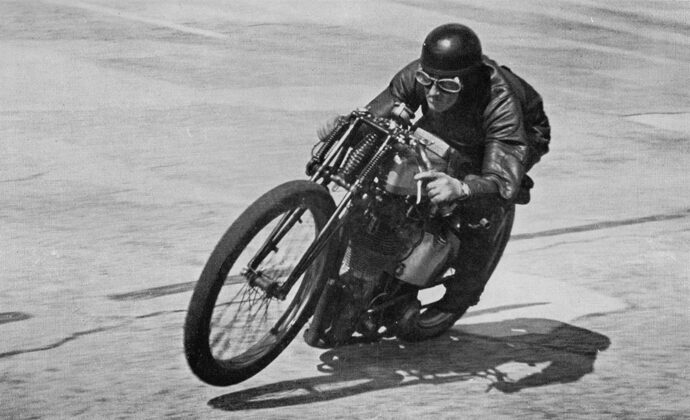 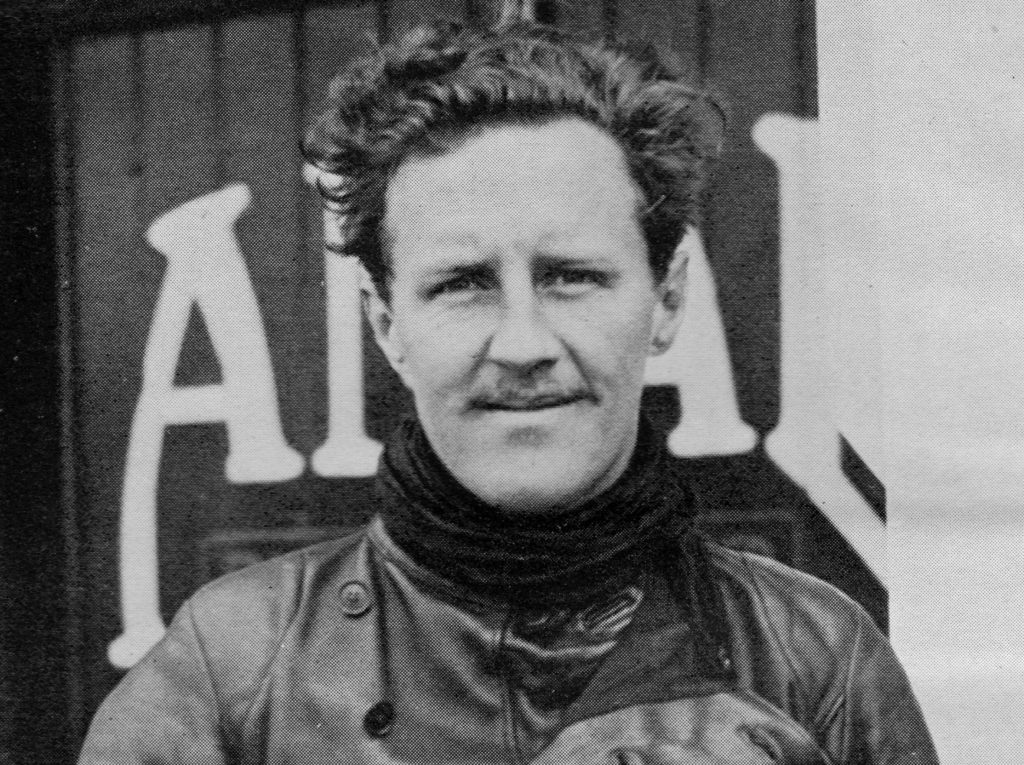 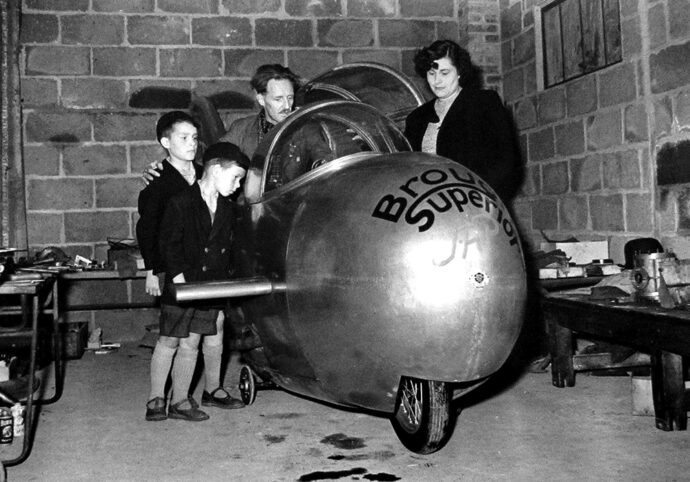 Noel, Daphne and sons admire the streamlined Brough Superior at Comerfords, Thames Ditton, before his record bid in September 1949 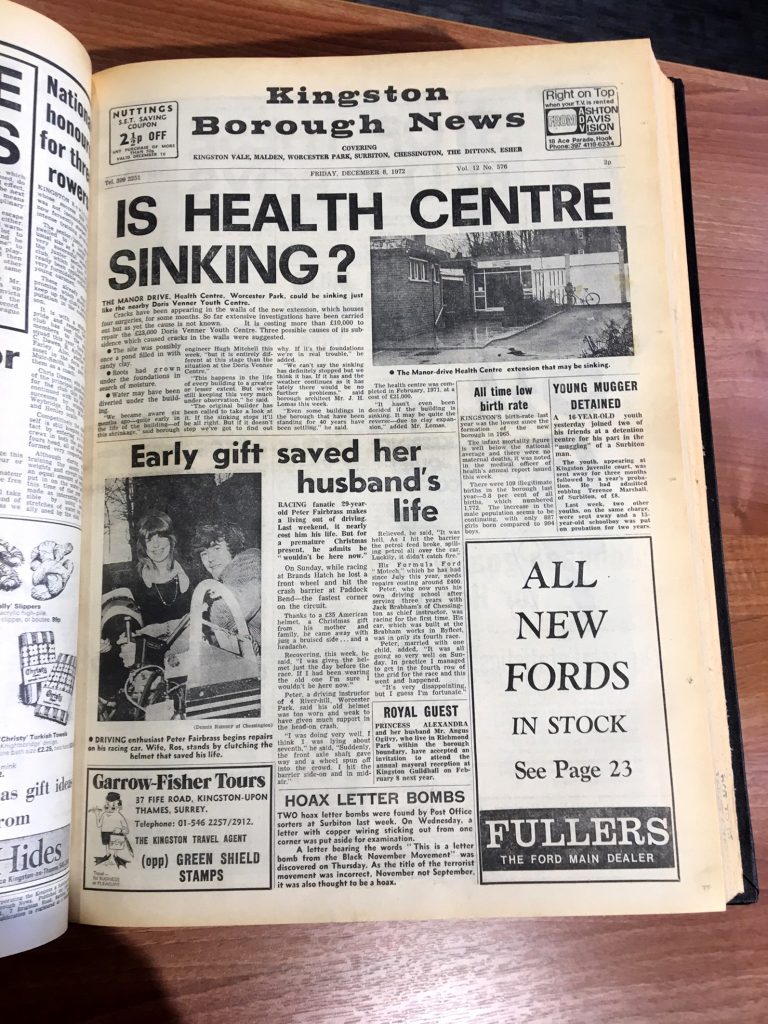 The now-defunct Kingston Borough News, which Noel launched as the Surbiton News 60 years ago