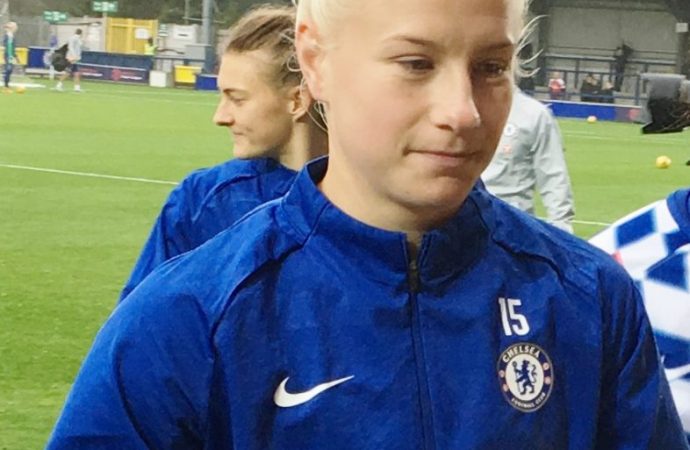 Chelsea striker Beth England has finally got the call-up to the national squad! Along with Chelsea Women’s keeper Carly Telford, she has been picked for Phil Neville’s England group with two friendlies looming, against Belgium and Norway. The in-form forward, who wears 15 for the Blues and who was mysteriously overlooked last season despite displaying

Chelsea striker Beth England has finally got the call-up to the national squad!

Along with Chelsea Women’s keeper Carly Telford, she has been picked for Phil Neville’s England group with two friendlies looming, against Belgium and Norway.

The in-form forward, who wears 15 for the Blues and who was mysteriously overlooked last season despite displaying cracking consistency and goal-scoring, is named in a 24-strong squad who will meet at The FA’s St George’s Park base next week for the first time since their high-profile FIFA Women’s World Cup campaign in France last month.

The Lionesses face Belgium at the Den Dreef Stadium in Leuven on Thursday August 29 (kick off 6.30pm UK time). It will be the first meeting between the teams since a 2017 UEFA EURO qualifier at the same venue.

The squad then travel to Bergen to take on their World Cup quarter-final opponents Norway at Brann Stadion on Tuesday September 3 (kick off 5pm UK).

Neville has opted for a blend of youth and experience as the Lionesses build towards the home UEFA EURO 2021, naming four senior debutantes among his squad, with Chelsea’s Bethany England and Manchester City’s Aoife Mannion the pick of the newcomers.

Clemson University goalkeeper Sandy MacIver caught Neville’s eye when she was awarded the golden glove for her outstanding performances in the 2018 tournament in France. Defender Anna Patten, a graduate of Arsenal now playing for the University of South Carolina, is the squad’s other debutante, having earned 42 caps at youth level since 2010.

Meanwhile, 19 members of the Lionesses’ FIFA Women’s World Cup squad have been rewarded with call-ups, having reached the semi-finals in last month’s tournament which drew record TV viewing figures and unprecedented levels of support for England’s senior women.

Neville has opted to rest Jill Scott to “manage the Manchester City midfielder’s load ahead of the start of the Barclays FA WSL season”. Fellow World Cup team-mates Ellen White and Karen Bardsley miss out due to injury.

Phil Neville said: “After a strong performance at the World Cup, but one which ultimately didn’t quite bring the success we had hoped for, it’s important that we now regroup and refocus on our next targets, which are of course to join forces with the home nations as part of Team GB’s 2020 Olympics campaign and, ultimately, to be ready to win EURO 2021 on home soil in two years’ time.

“In selecting my squad it was important to me to ensure we’re always working to bring exciting young talent through the pathway and into the senior team. I’m delighted to be able to give Beth, Aoife, Anna and Sandy their first senior call-ups. It’s a huge moment in their careers and they fully deserve the honour, having impressed me so much during last season.”

The Belgium and Norway games mark the first step in preparations for UEFA EURO 2021, which will be played at nine venues across England. As the host nation, the Lionesses do not have to qualify for the final tournament. Those on view against Belgium and Norway will also hope to stake an early claim for inclusion in the Team GB squad for the 2020 Olympics.

These fixtures will be followed by a clash with Germany at Wembley Stadium on Saturday November 9 – with more than 60,000 tickets having already been sold.
Visit TheFA.com/joinlsc for details of international tickets.