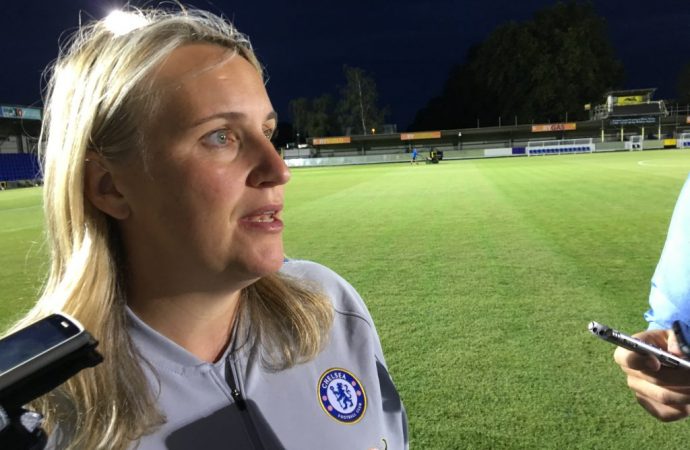 This season is the breakthrough season for women's football, Chelsea Women's manager Emma Hayes believes as she looks forward to a groundbreaking opening tie against Spurs at the holy-of-holies, Stamford Bridge, on Sunday lunchtime. Completely sold out, the match will see Chelsea Women go toe-to-toe with newly promoted Tottenham Women at 12.30pm... a situation Hayes

This season is the breakthrough season for women’s football, Chelsea Women’s manager Emma Hayes believes as she looks forward to a groundbreaking opening tie against Spurs at the holy-of-holies, Stamford Bridge, on Sunday lunchtime.

But that positive position is hard-earned, and Hayes – in her seven seasons at Chelsea – knows that years of being ignored, patronised and belittled have had to be endured by the women’s game to reach a point where the crowds, football standard and player ability now bear comparison with anything the men’s game can offer.

“I’m super excited going into the season,” she told reporters at a press conference at the Blues’ Cobham training ground this week. “I feel fresh and the players are raring to go as well. Winning on the pitch is not enough for us because winning off the pitch is just as important. We have the opportunity to introduce the game to lots of new fans; to have an excitement and buzz around the women’s game.

“It’s a really exciting time, and to start with a game against Tottenham has a great ring to it,” she added. “It’s one I feel extremely proud and privileged to lead this weekend.”

The match will give Chelsea’s backroom team a good chance to assess Spurs ahead of a second clash with Chelsea Women – this time at Kingsmeadow – on Wednesday November 20 in the evening at Kingsmeadow in the Conti Cup.

The one real downer for the Blues is that striker Fran Kirby is set to miss the opening game after picking up an injury during a pre-season friendly in Israel. “Fran isn’t ready; she’s had a slight problem with her knee. She took a shot in Israel in the warm-up and had a bit of discomfort, so she won’t be ready this weekend,” said Hayes. “I didn’t think Erin [Cuthbert] would be ready this weekend, but it’s likely she will be able to feature.”

Hayes has broadly stuck with last season’s squad, with one new arrival. “We go into the season knowing we’re not favourites, but that’s fine by me,” she said. “All I know is that my job is to prepare the team to be the best they can, and I’m confident I’ve done that.”

The newcomer is Norwegian forward Guro Reiten, who could get her chance to shine in Sunday’s match. However, after her brief appearance as sub in the last England Women’s match, Beth England is favourite to lead the line for the Blues.

There’s plenty of razzmatazz ahead of Sunday’s match, with a 10am ‘festival’ on nearby Eel Brook Common, with free coaching and skills challenges, face-painting and a DJ set.