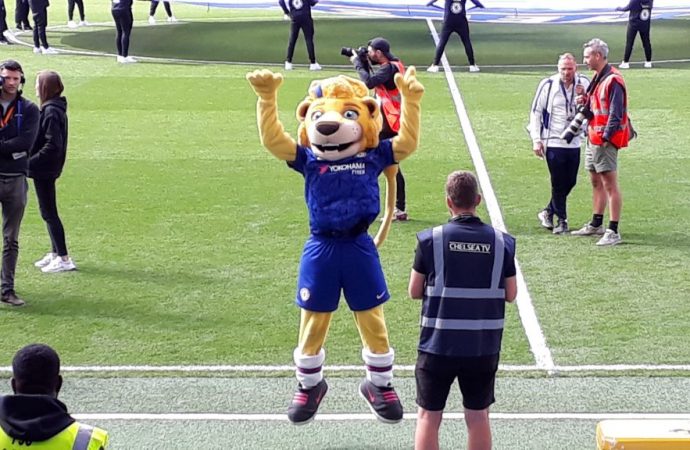 What’s the answer to attracting paying crowds to watch women’s football? The World Cup in France, and the huge TV audiences it generated in the UK, prove there’s an appetite… but how do you get the fans to turn up, week in week out, at ordinary Women’s Super League stadiums such as Chelsea’s Kingsmeadow? The

The World Cup in France, and the huge TV audiences it generated in the UK, prove there’s an appetite… but how do you get the fans to turn up, week in week out, at ordinary Women’s Super League stadiums such as Chelsea’s Kingsmeadow?

The season’s opener at Stamford Bridge – and that’s mascot Bridget, above, doing her bit to gee up the crowd ahead of the 1-0 win against Spurs last weekend – pulled in 24,564.

But here’s the problem. Those were free tickets. You simply had to apply, and you were sent completely free-of-charge entry. More than 40,000 were allocated to fans… and yet only 24,564 of them subsequently bothered to show up.

By giving away the tickets, are we devaluing the brand?

Chelsea Women’s manager Emma Hayes believes there’s a balance to be struck, but she was impressed by the staging of the match at Stamford Bridge, and hopes the impact and razzmatazz will lead to the steady building of a secure and sustainable women’s football fanbase.

“First of all, driving into the stadium, the posters up on the lampposts of all of our players, the equal marketing of our players in both the megastore and the other smaller stores… everywhere around the perimeter – just so I’m clear, that is not just for today that is for all of the time,” she said, emphasising that the ballyhoo surrounding the high-profile fixture was merely the start of the journey.

“You’re watching Tottenham Hotspur against Chelsea, and just as the kick-off happens and the Chelsea fans make an atmosphere, Spurs fans start chanting and I thought ‘Happy days, this is what we’ve worked towards – an atmosphere, people coming to the game!’ We have built on the momentum of the World Cup; the scheduling of the game, the timing of the game, now I have to put everyone else under more pressure to say we want more of them.

“For us it is about recognising opportunities. First we have got to build on getting people to Kingsmeadow. And then, when the right opportunities present themselves to come and play here – and the same for all of the teams across the league, we will have a blueprint of how to market this game that every club in the country will have access to; how you go about doing these things.”

On the specific issue of handing out free admission to the game, rather than getting people to pay for a product, Hayes was crystal clear. “Ideally, we don’t make it free,” she said, firmly.

“We can be cynical about paying for tickets, and everyone knows [people] would pay for this product [if it was men’s football], but I’m not going to criticise it. Our men’s team play here – it’s their home. It’s a progression,” she said.

Asked to contrast the buzz at the Bridge with the atmosphere at Manchester City the day before, for the Manchester women’s derby, Hayes turned the tables on journalists at the post-match press conference, and asked reporters who had been at both games to compare them. She was told that the atmosphere at Stamford Bridge was much better, and quipped – with a mischievous grin – “Well, it’s not the Empty-had, is it! Listen, Man City can be equally proud – I’m being cheeky.”

The turnout for the Spurs match represented five times the previous club record for a women’s fixture – a Champions League clash with mighty European champs Lyon at Kingsmeadow.

For the Chelsea manager, there has to be evolution in developing a regular, steady and constantly building weekly audience. “It is about osmosis,” said Hayes. “It is about sharing information and driving standards and I’m pretty certain that is why I was put on this Earth.”

She believes the Chelsea 1 Tottenham 0 scoreline was only one facet of the day, and is upbeat and positive about the wider implications of the match. “We’ve won a lot today; not just three points. Women’s football will continue to grow, and I’m so proud of this football club. You know, everybody has employers that they say ‘I loved working for them’. I doubt I’ll ever work at a place that has pushed and pushed for women to progress like this place has,” she said.

Hayes added that the target was to get to the point where professional women players receive the financial rewards that their efforts and professionalism merit. “But we have to keep giving all the time to the game to get people, not just through the doors but to keep coming,” she said. “It is getting easier – not having to sell yourself the way you once did.

“To make Kingsmeadow go from 2,500 [weekly attendance] to 4,500, we have to keep giving it the space [in the media] it deserves and people will return.”

She welcomed the DJ, entertainment and fireworks that heralded the Chelsea v Spurs game. “It added to the atmosphere, and it felt bigger than the numbers that were announced.”

She joked that the one thing she’d got wrong was forgetting to put sunscreen on, as she stood – exposed to the bright September sunshine – on the touchline.

Next up: Chelsea Women travel to Brighton for a 2pm kick-off game on Sunday September 15.