Is it off to the Bridge again? 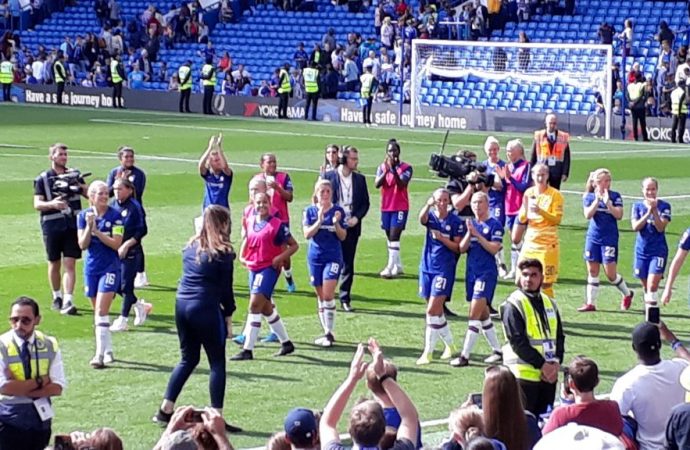 Could Chelsea Women v Manchester United Women be the second fixture in the Women’s Super League to be switched from Kingsmeadow to Stamford Bridge? The Blues’ management and marketing teams are currently in discussion about whether to stage the tie at Kingsmeadow (with a 5,000 full house), or move it to SW6 and go all-out

Could Chelsea Women v Manchester United Women be the second fixture in the Women’s Super League to be switched from Kingsmeadow to Stamford Bridge?

The Blues’ management and marketing teams are currently in discussion about whether to stage the tie at Kingsmeadow (with a 5,000 full house), or move it to SW6 and go all-out for another crowd of more than 20,000.

It comes as Chelsea Women prepare to travel down to Brighton for their second league game of the season – at Brighton on Sunday lunchtime.

The Chelsea v Man U match falls on what the Football Association is billing as its inaugural Women’s Football Weekend, and it covers November 16 and 17… a weekend when another men’s international footballing break provides opportunities to attract far more fans that usual to the women’s game.

Chelsea Women adored playing in front of a huge, raucous crowd, and would love to have another go… though they accept the reality of having to play most of their matches at Kingsmeadow. When – as is hoped – Champions League football returns to the Chelsea Women’s sporting calendar in 2020-21, there would be scope for big-name European nights at the Bridge as well, if – say – Lyon were the visitors.

The FA is calling on all football supporters to attend a women’s match at any level in the pyramid on November 16 and 17, and plans to make the weekend an annual event, building on the opening weekend when more than 62,000 supporters attended women’s fixtures… 24,564 of them at the Bridge to watch Chelsea play Spurs.

No final decision has been made, but some of Chelsea FC’s top brass are attracted by the idea of staging another women’s game at the famous Fulham Road stadium. However, this time the tickets wouldn’t be handed out like sweets (40,000 tickets were given away ahead of the Tottenham match).

This time, children would gain entry for £1 each, to give families an incentive to attend, with adult tickets capped at a higher – but still competitively priced – level.

The November weekend sees other potential ‘switches’ to bigger stadiums in the Barclays FA Women’s Super League. For a start, there’s the grudge north London derby as Arsenal take on Tottenham, while Liverpool and Everton battle it out for Merseyside bragging rights.

The FA Women’s Championship promises to be equally exciting with an all-London clash between London City Lionesses and Crystal Palace.

“We are excited to announce the first ever Women’s Football Weekend, for what is sure to be another great moment in a year that has seen huge momentum behind the growth in popularity of women’s football,” said Kelly Simmons, FA women’s professional game director. “Following on from a record-breaking FIFA Women’s World Cup and opening Barclays FA Women’s Super League weekend, there has never been a better time to visit your local team, and we encourage all supporters to get involved at all levels of the pyramid on November 16 and 17.”