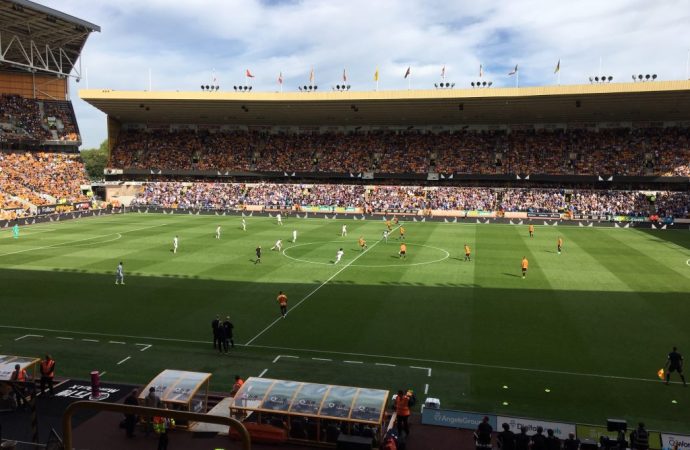 If you thought 5-2 was a diet, think again. The outrageous scoreline represented one of Chelsea’s finest Premier League away wins… all the more so as each goal was scored by the youngsters that Frank Lampard has entrusted with weathering a difficult season in which the club has been barred from bringing in experienced players.

If you thought 5-2 was a diet, think again. The outrageous scoreline represented one of Chelsea’s finest Premier League away wins… all the more so as each goal was scored by the youngsters that Frank Lampard has entrusted with weathering a difficult season in which the club has been barred from bringing in experienced players.

Tammy Abraham scored a hat-trick, sending him to the top of the tree of Premier League strikers, while there was another goal for exciting midfielder Mason Mount and a first crack for defender Fikayo Tomori – an extraordinary banana shot that left Wolves keeper Rui Patricio rooted to the spot and gaping in astonishment.

This was a crazy match. After half an hour it looked like being one of the dullest spectacles of the season, mired in midfield with neither side carving out anything like a proper chance.

Just when everyone was close to nodding off in the Midlands sunshine, the floodgates opened and the entertainment began. Willian stepped up to take Chelsea’s third corner of the afternoon at a Molineux stadium celebrating its 130th anniversary. The ball flew about, finally ending up in front of Tomori – running forward from defence – who connected with it, 25 yards out, then watched in bemusement as the ball spun in a ludicrous arc past Patricio and into the net.

Two minutes after the restart, it was 2-0 to Chelsea. In the 34th minute, Tomori – this time resisting the urge to shoot from 40 yards despite the encouragement from Blues fans – slid the ball through to Mount, who was brought down in the area for what would undoubtedly have been a penalty.

Prescient ref Graham Scott, who had a superb game, played advantage long enough for Abraham to spin on his heel and fire the loose ball home.

The home side finally woke up in the 71st minute, Romain Saiss bundling in via Abraham’s flailing hand as he tried to keep the ball out from his station on the goal line as Wolves fired a corner kick into the six-yard box. An own goal seemed cruel on Abraham, who will forever be a pub quiz question – the first Premier League player to score a hat-trick and an OG in the same match.

Then, with two minutes of normal time remaining, it was 2-4; Patrick Cutrone volleying home.

Yet there was still time for the impressive Mason Mount to add his name to the scoresheet. In the sixth and final minute of stoppage time he broke forward, jinked and fired in for this unlikely scoreline.

“I’m delighted for them all, but particularly for Fikayo Tomori,” said Lampard. “He has worked so hard from where he started to now – it’s superb. We’re trying to give chances to the youngsters and they are scoring and showing us why we should keep putting them in the team.”

But the real plaudits are for the emergence of Abraham; a Chelsea sapling who has been carefully nurtured, watered, fed and allowed to grow. By being transplanted into the front lines of other clubs, he has gained experience and confidence, and is steadily beefing himself up from the stick man of the U18s to a strong and adaptable forward for the senior squad.

As Wolves fans filed home, past the thumbs-up status of Sir Jack Hayward, there was a collective shell-shocked look on their faces. Meanwhile, Blues supporters celebrated all the way back down the M6 and M40.