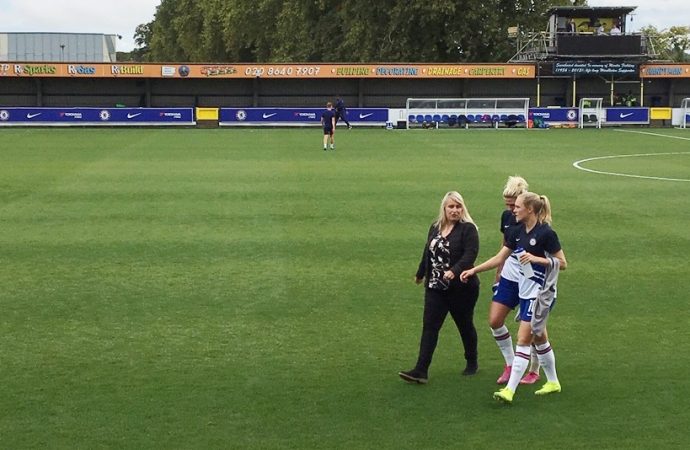 Chelsea manage Emma Hayes and central defenders Millie Bright and Magda Eriksson discuss tactics ahead of the Conti Cup clash with West Ham at Kingsmeadow… a conversation which ultimately paid dividends as the Blues finished as victors. However, it was anything but convincing in a soporific goalless first half under leaden skies that seemed to

Chelsea manage Emma Hayes and central defenders Millie Bright and Magda Eriksson discuss tactics ahead of the Conti Cup clash with West Ham at Kingsmeadow… a conversation which ultimately paid dividends as the Blues finished as victors.

However, it was anything but convincing in a soporific goalless first half under leaden skies that seemed to sap the energy from players and supporters alike.

Chelsea Women finally came good in the second half, in front of an encouragingly good crowd of over 3,000 for a match in the least prestigious cup competition on a bleak, wet day.

Goals from new arrival Guro Reiten (who is proving a superb buy) and the ever-dependable Beth England, who ran her socks off for the team, ensured the win.

Good to report that Kingsmeadow is looking better this season. Last year’s dreadfully unstable scoreboard – inherited from AFC Wimbledon who, in turn, inherited it from Kingstonian FC back in the day – has been replaced by a clear new illuminated giant screen which counts the elapsed time and relays the score.

Most intriguing of all was the Chelsea bench, with 16-year-old youth team goalie Emily Orman joining the subs, and enjoying the cheers she was given while warming up before the match in front of the Chemflow End.

So little happened in a dull and frustrating first half that I started to nod off. Poor passing, endless turnovers, hoofing and missed shots characterised the opening 45 minutes, and there was an audible sigh of relief when ref Kirsty Dowle decided to only inflict a single minute of further boredom on the paying public by way of stoppage time.

But in a much brighter second half, Chelsea imposed their authority and scored twice for the victory. A string of attacks forced saves from Anna Moorhouse, who had had almost nothing to do in the first half. In fact, the only recorded save in the opening 45 had been by Telford, nimbly batting away an on-target shot in the eighth minute.

With 50 minutes gone on the shiny new scoreboard, Eriksson fed England, who put the ball in the net.

The all-important second goal came 20 minutes later as Reiten – the day’s No1 corner-taker for Chelsea – delivered a curling corner kick which either flew in unaided, or with an added punch from Moorhouse. Reiten definitely wants to claim it.

The next match for Chelsea Women is a journey to Bristol City on Sunday afternoon, next weekend, ahead of Arsenal’s visit to Kingsmeadow on Sunday October 13, also in the WSL.

If there’s one strong lesson from today’s Conti Cup game against the Irons, it’s that the quality of all teams has improved in the past season – it’s no longer ‘us and them’, it’s a much tighter, more evenly balanced clutch of teams doing battle.

West Ham take a first-half corner in the Conti Cup match, with the new scoreboard in the centre