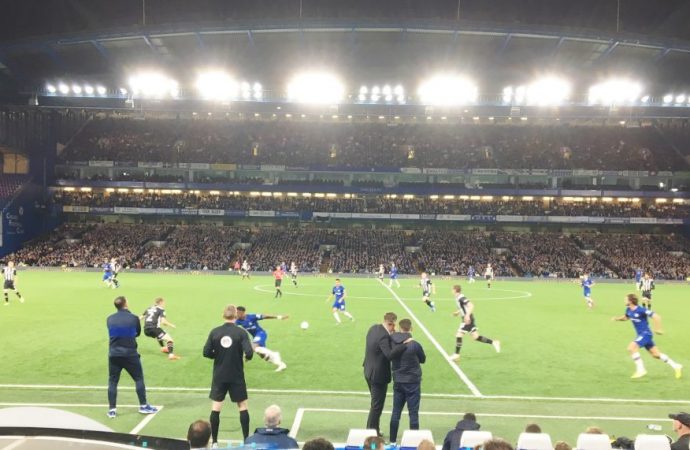 Every single player was changed for Chelsea’s League Cup clash with Grimsby Town on Wednesday night, and Mariners manager Michael Jolley must have been scratching his head about some of the names that appeared on the Blues’ side of the teamsheet (shown below). But the even-younger youngsters – the second tier of hopefuls now coming

Every single player was changed for Chelsea’s League Cup clash with Grimsby Town on Wednesday night, and Mariners manager Michael Jolley must have been scratching his head about some of the names that appeared on the Blues’ side of the teamsheet (shown below).

But the even-younger youngsters – the second tier of hopefuls now coming through via Frank Lampard’s trust-the-next-generation policy – performed brilliantly, and now the gaffer has even harder selections to make with every game, knowing his faith is well-placed.

The reward for Chelsea’s crushing of Grimsby – and the pressure never let up, with everyone fancying their chances of scoring right to the last gasp of stoppage time – is Manchester United in the next round, just before Brexit.

The floodlit Wednesday night drama at the Bridge saw the emergence of Reece James – a teenager for whom this, said Lampard, is just the beginning.

Like all teenagers, he also frustrates, and Lamps occasionally had to turn away, muttering to himself, in the technical area, when James didn’t set off at a canter down the wing, or passed inside when a lofted chip upfield was called for.

But these are early days, and James set up Michy Batshuayi – starting up front – for Chelsea’s second goal after seven minutes, following Ross Barkley’s opener after four… the midfielder weaving through the defence, as he does so often, but this time capping the finish with an excellent strike, in at goalie (and Grimsby captain) James McKeown’s near post.

Reece also bagged a goal for himself in the second half.

But in between, Chelsea’s apparent breeze to the fourth round was interrupted by the goal of the night, a stupendous volley by Grimsby’s Matt Green, fired past Willy Caballero and grazing the underside of the crossbar as it flew through the air at the Shed end, where more than 5,000 noisy Mariners fans were gathered in a pleasingly high overall crowd of 39,674.

That made it 2-1 after 19 minutes, and introduced a spell of doubt and introspection by Chelsea, which briefly interrupted the goal flow.

Normal service was resumed two minutes before the half-time break when Kurt Zouma, having his best game for many weeks, was shoved over in the area, and Pedro (interestingly, not Barkley) stepped up to convert. Pedro was wearing the captain’s armband for the night, and when he was subbed in the second half, with the score then a comfortable 4-1, Zouma was given the captainship for the rest of the evening.

That fourth goal came on 56 minutes, James teeing up Zouma to flick home.

There was time for James’s goal (5-1), Batshuayi’s second venomous rifle (6-1) and the returning Callum Hudson-Odoi’s first in ages after coming back from injury, to produce the final 7-1 annihilation.

“With his end product, Reece James showed what he can do,” said Lampard. “Two assists and a goal, but Reece’s performances on loan last year at Wigan showed the talent he has got. I think he is going to be a big player for this club. It is just the start for Reece.”

But where will he squeeze in to a squad already congested with promising youngsters?

One answer will be to keep faith with this Carabao Cup team, and allow the same X1 to take on United at the end of October.

Other positives included a start for Billy Gilmour, an industrious and mobile midfielder, not to mention Marc Guehi in the right of defence, and sub appearances by Tino Anjorin and Ian Maatsen – dramatically double-substituted with 23 minutes remaining.

“I thought Billy Gilmour ran the game from midfield, and Marc Guehi was solid. They’ve been outstanding this year,” said Lamps. “And the young subs showed how comfortable they are on the ball. Now the hard work starts to get in the team regularly.”