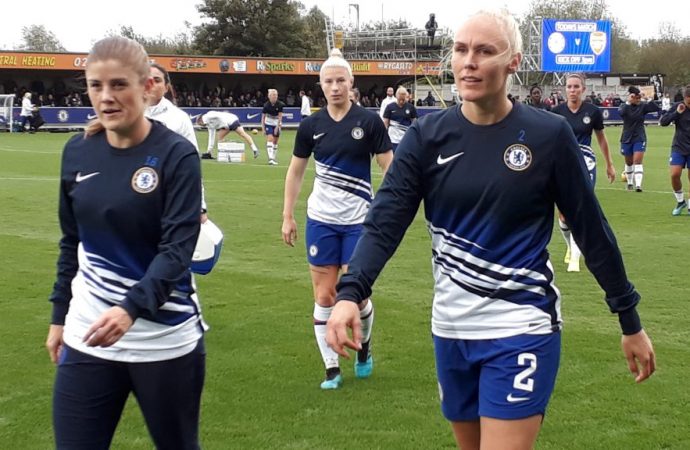 It’s Blue on Blue action this weekend as Chelsea Women travel up to Southport to face in-form Everton. The Toffees have an intriguing record against Chelsea. In the first half dozen WSL clashes between the two sides, Everton only lost once… beating the Blues on every other occasion. But in their last half dozen league

It’s Blue on Blue action this weekend as Chelsea Women travel up to Southport to face in-form Everton.

The Toffees have an intriguing record against Chelsea. In the first half dozen WSL clashes between the two sides, Everton only lost once… beating the Blues on every other occasion.

But in their last half dozen league games against the Blues, the Toffees have been beaten five times, drawing one game.

Last season this match resulted in one of Chelsea’s infamous goalless draws, but nobody expects that to happen this time around.

Everton have been enjoying a good season so far. In fact, they’re one of the surprise packages in the WSL, breathing down the necks of the acknowledged top trio of Chelsea, Man City and Arsenal.

The Toffees are looking to win four WSL games on the spin for what would be only the second occasion in their history, and they’ve won four out of the last five matches at Southport (as many as they managed in their previous 26 games!).

Chelsea’s expedition to Merseyside will be a challenge, as current league leaders take on fourth place, but Millie Bright is relishing the encounter.

“Our mentality, going into every single game this year, is to put on a great performance and get the win,” said the defender ahead of the match. “We want to keep going, keep raising the bar and keep showing the league that we are here to win and that we are a dominant team in the league.

“Obviously we know this weekend is going to be tough, playing away against Everton as they are doing really well at the minute. But we just keep focusing on ourselves and our game plan and we keep pushing each other every day in training.

“We have a lot of respect for every opponent we play, no matter where they are in the table. There have been results that you probably wouldn’t have expected, and I think it’s a credit to the league. Every season has improved and it’s much harder to win this season. I am expecting a tough game, we’re away against a young side with lots of energy and are doing well, so we are going to have to be at our best.”

Chelsea’s record-breaking unbeaten away run in the WSL was extended to 25 games with the comprehensive 6-0 victory over Birmingham (17 of those matches are wins), with 39 goals scored in the last 11 league games on the road – an impressive rolling average of 3.5 goals per game.

After this weekend, the Kingsmeadow showdown looms on Sunday December 8, when Man City visit. Tickets are £1 for under 20s and over 65s, with adult tickets costing £9.