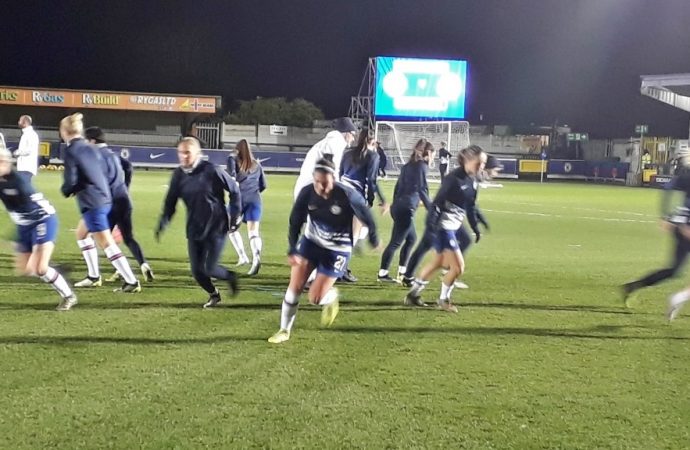 As Chelsea Women warmed up in the freezing night air in their customary blur of bodies at a bitterly cold Kingsmeadow on the night before the election, they were confident of a cup win against Reading, writes Jane Grove. But the Royals had other ideas. They flew at Chelsea, denying the home side the space

As Chelsea Women warmed up in the freezing night air in their customary blur of bodies at a bitterly cold Kingsmeadow on the night before the election, they were confident of a cup win against Reading, writes Jane Grove.

But the Royals had other ideas. They flew at Chelsea, denying the home side the space and control that they have come to expect, and they got their reward in this fifth and final Conti Cup group-stage game of the campaign.

It finished 1-1, and was then decided 4-2 in Reading’s favour on penalties. But under the convoluted rules of the Women’s League Cup tournament this season, Chelsea still finished top of the group, with Reading just behind… meaning that the Blues have home advantage once the knockout stage starts.

All the shenanigans about penalties can’t eclipse two key points from the match. 1. Chelsea underestimated Reading, and will need to be much more focused and organised for the next game at Kingsmeadow – on January 5, against (yes) Reading. 2. Deanna Cooper, firing on all cylinders again after fully recovering from a serious injury, scored the greatest goal of her life; a 35-yard screamer which left the 1,783-strong crowd open-mouthed.

Chelsea couldn’t get out of second gear in a disappointing first half which saw Reading hassle and harass the Blues whenever they could. With no time to settle on the ball, or string together attacking moves, Chelsea became frustrated (both Jess Carter and Sophie Ingle were booked in the space of 20 minutes) and disjointed.

Yes, there were a couple of decent attacks. Beth England lobbed a ball on to the top of the Reading net, and followed that up with a thumping shot that was well saved by Royals keeper Rachael Laws, but it was Reading who took the lead after 16 minutes.

From the foul that resulted in Carter’s booking, Jo Potter steered the centrally placed free kick around the wall. Carly Telford was unsighted in the Chelsea goal, and the ball hit the back of the net.

In the second half, Reading brought on the impressive Amalie Eikeland for Lisa-Marie Utland, and the new arrival, wearing 9, gave Hannah Blundell a tricky time down Chelsea’s right flank.

Yet just as Reading seemed to be heading for a win, Chelsea struck back. In the 66th minute, posing no apparent danger in the middle of the pitch – fully 35 yards from the Royals goal – Deanna Cooper pulled the trigger and fired. The ball flew through the cold night air, past Laws’ despairing dive and in for 1-1.

And there it stayed, even with five added minutes of time. Chelsea attacked and attacked in the dying minutes (the golden time when they are usually so effective), but couldn’t make the breakthrough.

Penalties at the Chemflow end followed, with Beth England’s effort bouncing away off the outside of the post, and Cooper’s spot kick being saved. Telford was unable to keep out four Reading efforts, so it finished 4-2 on pens.

Under the Continental Tyres Cup scoring system, Chelsea get a point and finish group leaders, so avoiding the nastiest opponents in the next round. Reading get a point and a bonus, so finishing second.

This was a bizarre game. So poor were Chelsea in the first half that Erin Cuthbert’s dad, enjoying a half-time cup of tea, said he was going to have words with her on the way home! In the event no words were needed; her second-half performance was impressive.

But overall Chelsea’s first-half approach was sub-standard, possibly in the wake of the tough match against Man City on Sunday. Passes were slipshod, attacks were snuffed out and everybody appeared to be below their best.

The second 45 minutes was a lot better, but this was, overall, an evening of underwhelming play, and a match that Reading could and perhaps should have won. The excellent Eikeland hit the post from close range, and was unlucky not to score a winner.

Chelsea’s last match of 2019 is against Liverpool, on Merseyside, in the league on Sunday.