Are we at tipping point? 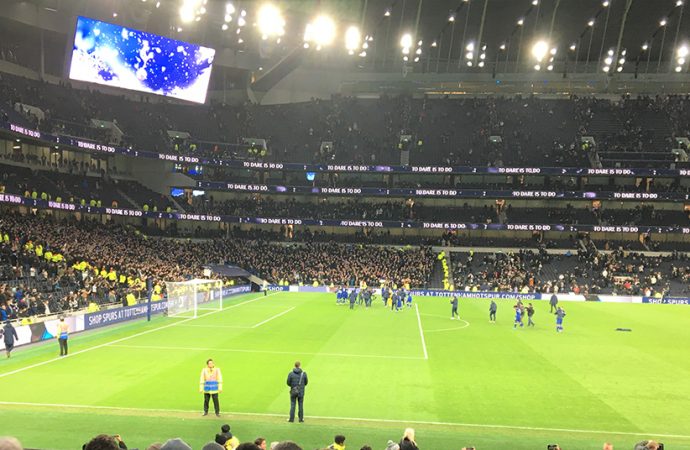 Have we reached tipping point on the issue of racism at football matches – a problem that has dogged the game since the 1970s, but which remains insoluble until the authorities take a firm line. Clubs have been reluctant to do more than window-dressing up to now. After all, a life ban on someone spending

Have we reached tipping point on the issue of racism at football matches – a problem that has dogged the game since the 1970s, but which remains insoluble until the authorities take a firm line.

Clubs have been reluctant to do more than window-dressing up to now. After all, a life ban on someone spending £1,000 a year on a season ticket (plus all the extras on beer, programmes and burgers) denies the football club a measurable proportion of the income it depends on.

Ban the odd idiot, the reasoning goes, and the issue will be quietly forgotten after a few days of attention. Then the clubs can get back to doing what they need to do; make money to feed the giant.

But the Spurs v Chelsea derby on Sunday late afternoon may mark a turning point… at last. As Frank Lampard led his team (above) across to the corner of Tottenham’s new stadium, where the away fans were busy enjoying an unexpected 2-0 victory against their deadly London rivals, the fallout was beginning to be felt.

The trouble began after VAR decided that a tangle between Toni Rudiger and Spurs’ Son Heung-Min had concluded with Son raking his studs up Rudiger’s side in a deliberate attempt to injure the Chelsea player. A red card was the video ref’s verdict (pictured below).

Tension was already high, with the Blues holding a 2-0 lead over their arch-enemies at the half-time break. Spurs had the better of the early exchanges after the interval, following the arrival of sub Christian Eriksen on the pitch, in place of Eric Dier; Son broke through, one on one with Kepa, in the 47th minute… but the Chelsea keeper was equal to the threat.

Six minutes later, Serge Aurier sent over a penetrating cross/shot that underlined Tottenham’s attacking intent, before Tammy Abraham thought he had added a third Chelsea goal at the other end, only for it to be ruled offside.

The game was becoming more physical. After 58 minutes, Moussa Sissoko was booked for shoving Willian off the pitch and down the slope that separates playing surface and fans at the new stadium… then came the Son/Rudiger incident.

The pair fell to the ground as Son intercepted a forward run by the in-form Chelsea defender, and ended up in a heap. But as Rudiger got up, Son – at this point lying on his back on the turf – appeared to kick outwards and upwards into Rudiger’s side. The Blues right back fell back to the ground, clutching his apparently life-threatening injury, but was then seen to take a sneaky glance back towards referee Anthony Taylor, to make sure that the man in black fully appreciated just how serious the assault was.

VAR immediately intervened, and Taylor stopped play to jab his finger in his ear and, for a few minutes, impersonate a statue.

Son, to be fair to him, seemed to have his eyes shut as he tumbled to the ground, giving credence to Jose Mourinho’s post-match comments that cast doubt on the seriousness of the incident. So assessing his intent in harming Rudiger became a very subjective judgement for the video refereeing panel.

“The Son situation was handled badly,” insisted Mourinho. “The ref has to book Rudiger, and the reaction from Son is not an aggression. Does Rudiger have broken ribs going to the hospital? Other people call it intelligent by Rudiger.”

Few, however, agreed with the Spurs manager’s interpretation. The more the studs incident was replayed, the more it looked like frustrated revenge by the South Korean international, who had one of his poorer games for the club.

In the wake of the red card decision, as Son traipsed off the pitch for the third time in the Premier League in a calendar year (the first time that’s happened to a player in nearly a decade), the Tottenham fans’ anger spilled over. Racist chants began to be directed at Rudiger, according to the German player who reported them first to Chelsea captain Cesar Azpilicueta.

The Spaniard ran to ref Taylor to pass on the report, and he in turn ran across to Lampard and Mourinho in the technical area. A stadium announcement followed 11 minutes later – leaving such a long gap between incident and response that baffled looks were exchanged by hundreds inside White Hart Lane, questioning precisely what it related to. ‘Racist behaviour is interfering with the game’ came the tannoy message.

A more immediate ‘message’ from the Spurs fans in the corner of the pitch where the Son incident had happened was to hurl what seemed to be a full cup of milky coffee (plus lid) at Kepa, missing him by centimetres.

Kepa complained, the game was briefly halted, and only restarted four minutes later, at which point a fired-up Toby Alderweireld was immediately yellow-carded for a nasty, cynical foul on Abraham.

After a traditional Mourinho double substitution in the 75th minute, Rudiger himself was booked for a foul on Davinson Sanchez… and the Spurs’ fans’ bile at Rudiger spilled over into racist chanting; chanting which Rudiger himself acted out with monkey gestures to emphasise the content. On 83 minutes, a second stadium announcement – same wording – was made, followed by a third identical tannoy message in the third of the eight added stoppage-time minutes.

Chelsea fans, meanwhile, were busy making ‘Ole’ chants of their own at every Chelsea touch… though they were shouting at a half-empty stadium as disconsolate Tottenham fans were streaming out by every available exit.

Mourinho was exasperated that decision after decision went against his team, and was wound up further by the ‘You’re not special anymore’ chants from the Chelsea fans who once adored him.

From Lampard’s point of view, a first away clean sheet at a ground where he had been expected to get nothing, was added reward for an excellent tactical battle, fought and won.

But the longer-term racist issue is one that simply won’t go away.

Chelsea FC has been making firmer efforts to crack down on racist chanting at Stamford Bridge, with the race-hate insult ‘Yid’ – too frequently incorporated in terrace chanting – outlawed and frowned upon (though not yet wholly eradicated). But what are the authorities supposed to do when Tottenham’s own fans gleefully chant the word endlessly around the stadium, having appropriated a racist jibe and turned it into a proud and defiant identity celebrator?

And what are the Stamford Bridge stewards supposed to do when the entire away end, on the site of the former Shed, chants homophobic vitriol about Chelsea’s supporters supposedly being ‘rent boys’? Is it possible to eject an entire stand, and give each individual a life ban? If one or two fans are ejected to make the point, is that fair on them? Would it, indeed, stop the chanting, or would it merely inflame the situation and possibly put the hard-pressed (and underpaid) stewards’ own safety at risk?

So many questions… but the three stadium announcements at White Hart Lane – the first time the racism issue has been so addressed in a Premier League game – must concentrate minds. With the Spurs v Chelsea match nearing the final whistle, it would have been madness to suspend the game and taken the players off the pitch (the next advancement in the anti-racism protocol), before moving to a full suspension. For one thing, Chelsea were 2-0 up as the clock ran down.

But you still sense that, deep down, the Premier League just want the issue to quietly go away, rather than be faced with – as they see it – having to deal with society’s issues.

When a group of bovine fans get together and chant together, they take on an identity that those individuals would not publicly reveal in any other situation. So football does have to address the reason why mass mentality seems to generate the kind of language and insult that would not be tolerated on, say, a bus or in the street.

And Chelsea keeper Kepa Arrizabalaga will be thankful that the object thrown at him was not glass or metal.

That missile-chucking incident alone could yet result in Spurs being made to play a future game with one hand behind their back, via a partial fan ban. But solving the Y-word issue is a more intractable conundrum, and one that isn’t going to be sorted out in the next day or two. We may have reached some form of tipping point. Finally.