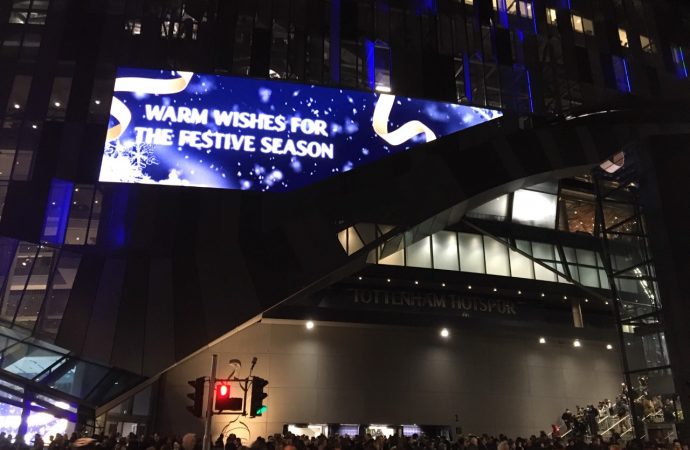 The giant message board on the side of the new-look White Hart Lane stadium beamed out a message of festive cheer as fans made their way back up the 10-mile kebab-lined road to Seven Sisters. And Chelsea wished their old manager reciprocal greetings, by comprehensively outwitting, out-manoeuvring, out-thinking and out-playing him. Pupil beat tutor, Frank

The giant message board on the side of the new-look White Hart Lane stadium beamed out a message of festive cheer as fans made their way back up the 10-mile kebab-lined road to Seven Sisters.

And Chelsea wished their old manager reciprocal greetings, by comprehensively outwitting, out-manoeuvring, out-thinking and out-playing him. Pupil beat tutor, Frank Lampard totally outfoxed Jose Mourinho, and an afternoon that had appeared to all the world to be set up for the ritual slaughter of Chelsea turned into an extraordinarily one-sided parade, with Spurs in shambolic disarray in all departments.

To add further spice, Hueng-Min Son was red-carded for a dangerously high boot, and every VAR decision seemed, for once, to go Lampard’s way.

It ended 2-0 to the Blues, but it could easily have been more if the marauding strikers and midfielders had made better use of their second-half chances too.

And all because Chelsea switched to three at the back, focused for 100% of the time instead of drifting away for spells, played for each other, played with the kind of zest, flair and intricacy that has been weirdly absent since their tour-de-force away win at Wolves, and came up against a stodgy, listless and constipated Tottenham team.

Marcos Alonso, dropped from the squad – never mind team – for lack of effort in training, was rehabilitated as Chelsea pressed from the kick-off, but it was really Mason Mount (still a yard short of the blistering pace that illuminated the early parts of the season) and Willian who really stood out for Chelsea.

Mount harried and hassled all the time, but it was Willian’s vision and impudence that made him star player at the Lane. Chelsea ought to give him a five-year contract, never mind dithering about giving him one or two.

Chelsea’s second corner of the game, in the 12th minute, led to the opener; Willian exchanged passes with Mateo Kovacic, jinked and let fly a scorcher after evading Serge Aurier… scudding past Paulo Gazzaniga into the net.

The real drama came, however, in the second minute of first-half stoppage time. Alonso ran in on the Spurs goal, Gazzaniga came out, and the pair clashed in a sickening crunch. But the ball had gone, the keeper merely took out the Chelsea defender (with a high boot as well), and VAR said ‘Penalty’. Willian stepped up and coolly converted for 2-0 at the break.

Chelsea then had the cheek to make the Spurs players stand around on the pitch for a minute at the start of the second half. It wound them up a bit, and geed up the fans who had fallen into a hypnotic kind of torpor, but Tottenham just couldn’t get the breakthrough, even with the more inventive Christian Eriksen on the pitch as a sub.

Tammy Abraham put the ball in the net, but his effort was ruled out for offside. Then, on the hour mark, Son was shown red (after another VAR dither) for raking his studs up Tony Rudiger’s side. It was the right decision, but a cheeky glance back by Rudiger – interrupting his pain-filled pitch rolls – suggested it might have been less painful than it looked.

Spurs with 10 men were as hopeless as Spurs with 11. Jose Mourinho jumped up and down on the touchline in frustration, but this was always going to be Chelsea’s day, despite the apparent difference in the two teams’ form.

You’re not special anymore, chanted the Blues fans to a half-empty stadium at the end. Only a small percentage of the 61,104 were really happy with this result, but it has rescued Chelsea’s slide of recent weeks, and gives hope of more advances over the festive games… especially if Lamps sticks to the more attacking 3-4-2-1 that worked so well in Spurs’ gleaming new stadium.

The game was marred by more reports of racist chanting, against Rudiger, and by a missile thrown at Kepa in the 63rd minute. More action is likely to follow.