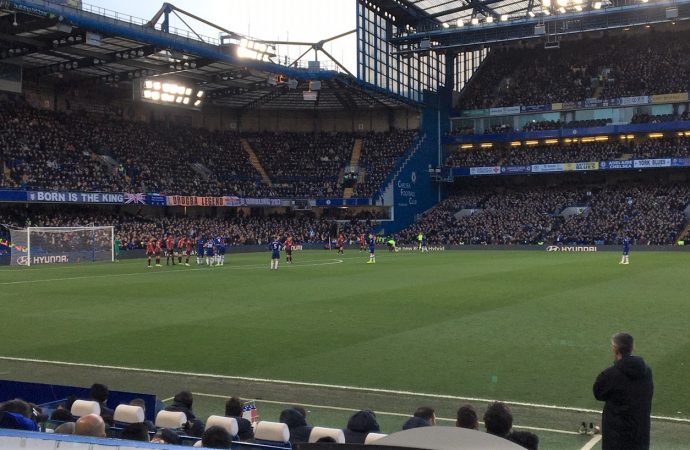 Another home shocker for Chelsea on Boxing Day… and another trail of angrily torn-up tickets between the stadium and Fulham Broadway station. All you can do is laugh. Nottingham Forest, who visit in the FA Cup shortly, will be packing a case of prosecco in the boot of their coach – it’s that easy to

Another home shocker for Chelsea on Boxing Day… and another trail of angrily torn-up tickets between the stadium and Fulham Broadway station.

All you can do is laugh. Nottingham Forest, who visit in the FA Cup shortly, will be packing a case of prosecco in the boot of their coach – it’s that easy to beat the Blues at their (cue hysterical mirth) fortress.

One-nil to West Ham, 1-0 to Bournemouth (above), now 2-0 to Southampton. And yet the boys in blue trained on Christmas Eve AND Christmas Day to get ready for this one. What a waste of everyone’s festive time.

The home record under Frank Lampard is simply dire; there are no two ways about it. When Chelsea were managed by the man he defeated 2-0 at White Hart Lane just days ago, Chelsea would go entire seasons without home defeats.

“Teams are making it difficult here,” said Lampard afterwards. “We are not making enough chances, we were at the beginning of the season. We are being asked a different question at home.”

That question currently is: ‘How long is this dreadful home form going to be allowed to continue?’

“We do not manage to pick up that final pass,” said Lampard. “It felt the same as recent games. I think we have enough to be better than we were today. It needs to be a quick learning process now.”

All that is true, but it’s the lack of progress in the team that’s the real worry. While Mason Mount started the season at the gallop, his link-up play with Tammy Abraham is now less of a threat.

After a blinder at White Hart Lane, Willian was oddly subdued. Even his corners – usually one of his strong suits – were poor.

Southampton contained and annoyed Chelsea, slowing down play to a pace calculated to irritate fans, manager and players… then hitting them hard on the break with sprinters Nathan Redmond and Michael Obafemi causing havoc with the three amigos at the back; Kurt Zouma (replaced at half-time), Toni Rudiger and Fikayo Tomori.

Tomori made some promising runs upfield, but Rudiger – perhaps exhausted by all the media attention after his racism anger at Tottenham – was subdued.

This was, in truth, a miserable performance by the Blues. Another miserable home performance. Chelsea have now lost consecutive home league games for the first time in nine years.

Obafemi put the visitors ahead with an 18-yard strike to give Saints a deserved lead after 32 minutes, slaloming through the defence to unleash a left-foot curler into the top corner.

Chelsea, who started with Callum Hudson-Odoi on the right, had done precisely nothing for the first 20 minutes. The only thing I wrote in my usually busy notebook was ‘weather is cold and miserable’.

When ex-Chelsea left back Ryan Bertrand was booked for time-wasting after half an hour by ref Jon Moss, who finally lost patience with a throw-in that took a full minute to complete, you had a pretty good idea of Southampton’s tactics.

And they worked to a T. With every Chelsea player being harried and hassled (just as the Blues had done to Spurs at the weekend), there was no room for creativity, and Chelsea duly failed to create.

At half-time, with the Blues 1-0 down, Zouma was sacrificed for Mount, and although there were then glimmers of hope, Abraham couldn’t carve out any chances and Alex McCarthy ended up having a quiet afternoon in the Saints’ goal.

Frustration grew. Jorginho and Tomori were booked in four irritable minutes, then in the 73rd minute Stuart Armstrong fed Redmond, who touched the ball past Kepa for the killer second goal. And that was that.

Heaven only knows which Chelsea will bother turning up at Arsenal this weekend.

Ralph Hasenhuttl outfoxed Lampard just as Lampard had outwitted Jose Mourinho, and the Blues are now eight points worse off than they were under Maurizio Sarri after 19 games, losing five of their last seven league games.