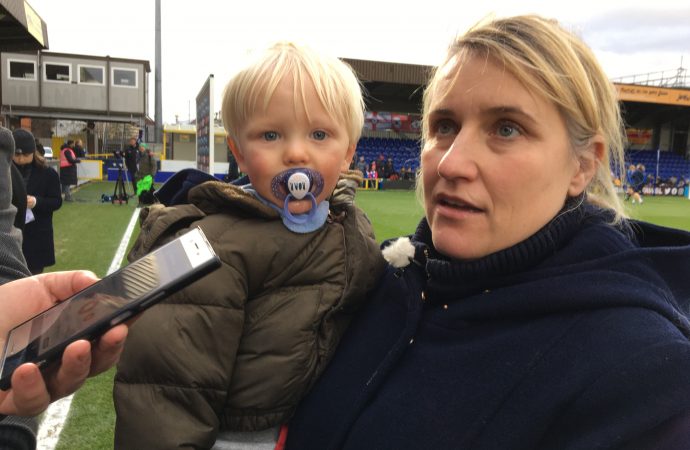 It was an outbreak of flu that swept through Chelsea’s training ground at Cobham last week that led to Sam Kerr making her debut against Reading at the weekend, revealed the gaffer. Chelsea manager Emma Hayes, cradling her son Harry during the post-match touchline press conference after the 3-1 league win, said that so many

It was an outbreak of flu that swept through Chelsea’s training ground at Cobham last week that led to Sam Kerr making her debut against Reading at the weekend, revealed the gaffer.

Chelsea manager Emma Hayes, cradling her son Harry during the post-match touchline press conference after the 3-1 league win, said that so many players were knocked sideways by illness that the new Australian signing found herself in the starting line-up, writes Jane Grove.

“It was a lot to start her, but we had an outbreak of flu, so I had no choice,” said Hayes. “She fits in so well with the team, and I’m happy today that responsibility is shared across everybody to get us over the line.”

She said that the flu sufferers were now isolated from the rest of the squad, until their sneezing and wheezing passes. “Ramona [Bachmann] is in bed, Carly [Telford] is sick, Erin [Cuthbert] wasn’t well earlier in the week…”

Hayes added that while she was unhappy with the team conceding the first goal in the WSL match at Kingsmeadow on Sunday lunchtime, she was delighted with the response to that setback. “We showed an ability to bounce back.

Although the Blues fell behind after 15 minutes to Fara Williams’ well-taken shot, the game really hinged on the clash between the galloping Kerr and Royals keeper Grace Moloney a minute later. As Kerr ran towards goal, Moloney came out to meet her beyond the goal area, clattering into the debutante, boot-first.

Kerr turned an alarming cartwheel in the air, fell in a heap and was treated for three or four minutes by two medics while ref Stacey Pearson – with no hesitation – showed Moloney a red card. That forced a reshuffle, with the promising Brooke Chaplen sacrificed for reserve keeper Rachael Laws, allowing Chelsea to plot a way back via goals from Beth England (assisted by a beautiful on-the-move backheel from Kerr), Guro Reiten (a skillful lob) and sub Erin Cuthbert (converting after Laws parried another England effort).

“The first game’s always going to be a little bit ‘What are we going to look like after two and a half weeks?'” said Hayes. “Sam should have scored with the first chance of the game, but – hey, ho – she’s going to hear that 100 times. But she set up two, and got a player sent off… not that she was trying to get her sent off, but it was a clear red.”

Hayes said that the sending-off changed everything, as Reading dropped much deeper and became more compact out of necessity with only 10 players. “They dropped deeper, so space was no longer there, so I made some adjustments in the first half to give us some more width a bit higher up the pitch, but it’s exciting to see the pair of them [England and Kerr] playing together, and I’m sure they were happy to get the first [match] out of the way.”

The real praise after Sunday’s important three-point gain went, however, to a player who hasn’t attracted as much notice as many thought she would when she arrived in the summer… the 25-year-old Norwegian international Guro Reiten.

“Guro was brilliant,” said Hayes. “I think she and Drew [Spence] were the top two players. Guro, you have to remember, has played 12 months without a break. She needed the December break; it’s like an off-season for her, and she’s come back fresh and aggressive in her performance.

“There are things I’ve asked of her, and I saw them today and she made it difficult for me to take her off the pitch; that’s all I ask… make it hard for me!”