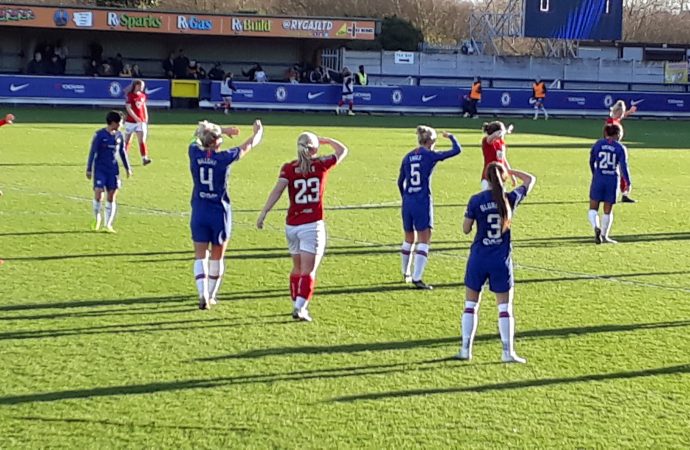 A ferocious low winter sun made life difficult for both sides – and may have explained a couple of the goals in a free-scoring league match at Kingsmeadow – but Chelsea eventually crushed Bristol City 6-1 to tee up next weekend’s thriller, and potential league clincher, against Arsenal. Not that manager Emma Hayes would get

A ferocious low winter sun made life difficult for both sides – and may have explained a couple of the goals in a free-scoring league match at Kingsmeadow – but Chelsea eventually crushed Bristol City 6-1 to tee up next weekend’s thriller, and potential league clincher, against Arsenal.

Not that manager Emma Hayes would get over-excited if the Blues do manage to squeeze a win at Meadow Park. She knows only too well that the side that beat Man City recently drew miserably against rock-bottom Liverpool.

But the arrival of Aussie superstar Sam Kerr, who is still finding her feet and feeling her way into the pace of Women’s Super League action, means Chelsea have a fresh impetus to their overall game, and that was clear for all to see against Bristol City.

That low, bright sun, like a headlight shining straight in your eyes, may have been partly responsible for City taking a surprise lead against the Blues in front of another healthy crowd total of 2,866 at the 2pm kick-off match.

Ann-Katrin Berger, in the Chelsea goal, seemed to be unsighted when – in Bristol City’s first attack after a quarter of an hour – the ball fell kindly to centre forward Ebony Salmon after the usually dependable Erin Cuthbert was unable to shepherd it clear, and Salmon’s looping shot found the one place that the keeper couldn’t defend on the dive. Nothing fishy about it, though the injustice of City scoring on the one occasion Berger was called into action during the entire match was clear and obvious.

Chelsea were playing into that blinding sun in the first half, and Berger may consider investing in one of those natty shades or a peaked cap so that in future games at sunny Kingsmeadow she doesn’t have to constantly put her gloved mitt over her eyes to see what’s coming.

The crowd was briefly struck dumb by the sheer cheek of City going ahead, but they soon found their voice again. Arguably the chanting had been another distraction for the players, as on 14 minutes, just as the fatal attack was building, the Blues ultras began a loud, sustained and supportive chant for their favourite No14, Fran Kirby, watching from the stand as she battles to recover fitness and rejoin the fray. It was while she was rather sheepishly acknowledging the chanting that City pounced.

That lead didn’t last long, and – in truth – Chelsea never really looked like losing (or losing control of) this game.

It was 1-1 after 28 minutes as Beth England rose to meet yet another of the balls raining into the City box, and reached it moments before keeper Sophie Baggaley to level.

Chelsea, playing with a diminished and changed team after a virus swept through the squad (forcing Emma Hayes to name just five subs and no reserve goalie) went ahead after 40 minutes through Hannah Blundell, who was playing as an ever-advancing right back. After that, the Blues didn’t look back.

It was 3-1 five minutes later, as Jess Carter got her boot to a loose ball in another chaotic melee in the City box, then hit 4-1 before half-time as Ji So-Yun spotted a gap and fired home in stoppage time.

Following the 3-1 victory over Reading, Hayes had dropped captain Magdalena Eriksson and key defender Maren Mjelde from the starting line-up, and listed Kerr and fellow newbie Jamie-Lee Napier on the bench. Kerr came on for the start of the second half.

With tables turned, and Bristol having to peer into the blinding sun, South Korean Ji capitalised on a Kerr backheel to Guro Reiten, meeting the Norwegian’s superb cross into the box for 5-1 just five minutes after the break.

The final goal came eight minutes from the end; Jonna Andersson crossing for England to head her second of the day.

The last 20 minutes were more concerned with trying to set up Kerr for her first Chelsea goal – a confidence-booster that simply would not come. She came close, rounding the stranded keeper in the 68th minute, only for Jas Matthews to slide in and clear a shot which had been ambling towards the empty net when a firm boot was all that was required.

Had her team-mates not been so keen to help Kerr get a goal, Chelsea probably could have notched another two or three in a scoreline which, amazingly, did not represent the sheer dominance of the home side. But there was a real, and slightly distracting, effort by the starters and the other subs to find Kerr at every opportunity.

Kerr is showing flashes of the dangergirl she clearly is, but it will take time to bed down and adjust to the rhythm of another continent’s footballing pace.

Provided more of the squad have recovered from the lurgy, Wednesday night’s Conti Cup quarter-final against Villa should see some different faces given a chance to shine as brightly as the Norbiton winter sun as the Blues build up to that all-important outing to Arsenal. Tickets for Chelsea v Villa from: here