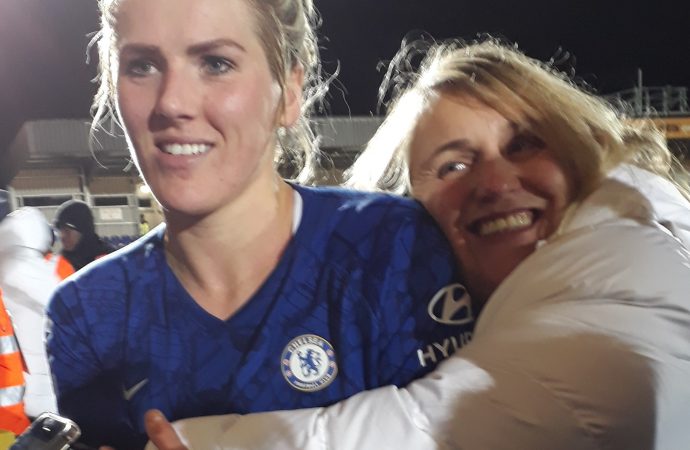 The hearty hug of relief that Blues manager Emma Hayes gave Millie Bright at the end said it all! Chelsea were pushed every step of the way in an utterly absorbing and – at times – crazily frustrating Conti Cup quarter-final at a chilly Kingsmeadow on Wednesday night, but the Blues eventually triumphed 3-1 over

The hearty hug of relief that Blues manager Emma Hayes gave Millie Bright at the end said it all!

Chelsea were pushed every step of the way in an utterly absorbing and – at times – crazily frustrating Conti Cup quarter-final at a chilly Kingsmeadow on Wednesday night, but the Blues eventually triumphed 3-1 over their lower-league opponents Aston Villa.

Villa can hold their heads high after this encounter, which proved that they will be able and dangerous opponents in next season’s Women’s Super League after they – surely – gain promotion from the Championship.

The Blues are in the semi-finals of a competition that manager Emma Hayes has always had reservations about, principally because it can eat into the weekends that should be reserved for proper league matches.

But she was delighted with the performance of her girls after the game, and was particularly thrilled with the efforts of captain Magda Eriksson, who commanded from the back, Millie Bright, who shifted forward into midfield and didn’t put a foot wrong, and 16-year-old striker Emily Murphy, who came on as a second-half sub, and was overjoyed to score her first Chelsea goal.

Unlike in some recent matches, the Blues were out of the blocks like whippets. No sluggish early minutes, no falling behind to an opposition goal, no lapse of concentration… just a full-blooded, gutsy determination to get the job done.

Which is why, at 0-0 at half-time, there was a sense of bewildered bafflement among the 1,799-strong crowd.

Chelsea had carved out enough chances to be streets ahead by the break, and yet gritty defending and passionate counter-punching meant Villa were still in contention.

The Blues had no fewer than nine corner kicks in the first 45 minutes, but simply couldn’t make any pay, despite having the No1 strikeforce of Beth England and Sam Kerr up front, backed by a midfield line of Ramona Bachmann, Bright and Erin Cuthbert.

On paper, Chelsea looked invincible. But the doubts were starting to creep in as the second half got underway. The last thing Hayes wanted was to have to go to extra time and penalties with the crucial WSL game against Arsenal looming on Sunday.

Chelsea had begun at the gallop, and it looked as if Kerr had finally netted her first goal in a blue shirt after 11 minutes and 29 seconds… only for ref Louise Saunders to rule it out for offside.

Moments later Kerr teed up England, whose shot beat Villa keeper Sian Rogers, struck the underside of the crossbar and bounced clear without crossing the line.

Kerr, England, Bachmann and Cuthbert all came close. When, on 22 minutes, England was bundled over in the penalty area, the Blues’ ultras began wittily chanting “VAR, VAR, VAR.” As Kingsmeadow lacks undersoil heating, never mind VAR, it was just another example of the supporters’ increasingly inventive ironic singing.

Every attack was blocked – sometimes with a final hoof, sometimes with finesse. One of Villa’s strengths (one that will stand them in good stead if and when they gain promotion) is speed, and it was the nippiness of captain Elisha N’Dow and defender Asmita Ale that were so often the difference when it came to chasing back and neutralising Chelsea attacks.

Not for nothing are the Villans top of their league and undefeated in Championship matches this season. It’s hard to remember any team coming to Kingsmeadow and mopping up so much pressure so well.

Erin Cuthbert took the Blues’ 10th corner of the game, Eriksson rose at the far post and headed the ball past Rogers for 1-0. The stadium breathed a sigh of relief.

Kerr came close a couple of times, but Hayes decided to save her for the Arsenal game and brought on 16-year-old Emily Murphy. With Jamie-Lee Napier replacing Cuthbert, and Ji So-Yun on for Bachmann, the fresh legs began to tell.

Yet it was midfield marvel Sophie Ingle who came closest to getting Chelsea’s second goal – her effort tipped over the bar in the 76th minute.

Then Napier made a superb run upfield in the 81st minute, hurdling tackles and running into the heart of the Villa area. She threaded the ball to England, who chased it to the line then pulled it back for Ji to score.

It looked comfortable at 2-0, then – with five minutes of normal time remaining – a rare backpass error by Magda Eriksson allowed Villa sub Kerri Walsh to pounce and beat the advancing Ann-Katrin Berger for an unexpected wake-up goal. Eriksson always takes any lapses to heart, so her team-mates rallied around her at the final whistle to give her some reassuring hugs.

Chelsea were now desperately trying to run down the clock and bring the match to an end, even shepherding the ball off into the corner… a tactic that Villa striker Emma Follis was to describe as one of the biggest compliments the WSL side could have paid them!

Then, in stoppage time, came Murphy’s moment. In the first added minute she was in the right place to intercept a loose ball and hammer it home for her very first Chelsea goal. She was over the moon with delight, and 3-1 it remained.