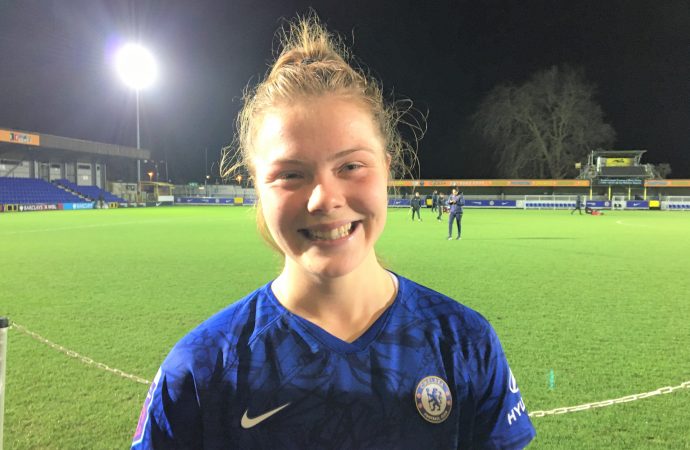 It’s the smile that says it all. Sixteen-year-old youth striker Emily Murphy scored her first goal for Chelsea on a chilly Kingsmeadow pitch on (a night she’ll never forget) Wednesday January 15 2020, clinching the Blues’ 3-1 Conti Cup quarter-final win against Aston Villa. The teenager latched on to a loose ball in the

The teenager latched on to a loose ball in the Villa area in the first minute of second-half stoppage time, then slid it goalwards to complete the result after Villans’ keeper Sian Rogers was only able to parry a late shot from Millie Bright.

Murphy’s goal sparked scenes of jubilation as she was mobbed by team-mates who appreciated the personal significance of the moment for the forward, while at the same time realising that it was also the goal that had put the Blues through to the semi-finals of the League Cup.

Her achievement rivals that of Ian Hamilton, who remains Chelsea men’s youngest goalscorer, netting against Spurs in the old 1st Division at the age of 16 years and 138 days. That feat was achieved way back on March 18 1967, before even Emily Murphy’s mother was born!

Chico, as Hamilton was always nicknamed, only played five times for Chelsea before the Blues’ then manager Tommy Docherty decided to sell him on, initially to Southend. However, he soon moved again, and enjoyed a long career with – you’ve guessed it – Aston Villa, where he played in two League Cup finals.

Murphy’s golden moment at 8.47pm was one of those tantalising slow-motion goals in which the ball seemed to take an age to cross the line before quietly coming to rest, nestled in the innermost corner of the net as Villa goalie Rogers, flat on her behind, watched helplessly.

Murphy, who made her debut in a blue shirt in the Conti Cup against Spurs at the end of November (in the same match as fellow teen Charlotte Wardlaw), joked with Bright at the end of the game (below) and, engulfed by gales of laughter, took a string of selfies to celebrate the moment.

After her debut in the autumn, manager Emma Hayes described Murphy as having “great character” and even “a swagger about her”; qualities Hayes recognises as being important in someone confident enough to play in a forward role where she will be in the spotlight and exposed to serious scrutiny.

“I can’t honestly put it into words,” said the ebullient Emily when GL Sport caught up with her at the end of the match, as the lawnmowers began their post-game drone in the background. “It’s something that I’ve dreamed about since being a little kid, so it’s amazing! Honestly, it’s amazing. The best feeling!”

She said that Emma had made a beeline for her at the final whistle to congratulate her and tell her that it didn’t matter when the goal had been scored – even in the 91st minute. “You got the goal, you didn’t stop working,” the manager told her.

Murphy said that she’d really enjoyed the game, and that she feels she’s growing in confidence all the time, and benefiting from playing with such gifted team-mates, including new arrivals Sam Kerr and Jamie-Lee Napier.

Jamie-Lee? “She’s settling in really well,” said Murphy. “She’s a lovely girl, and she’s really great to be around.”