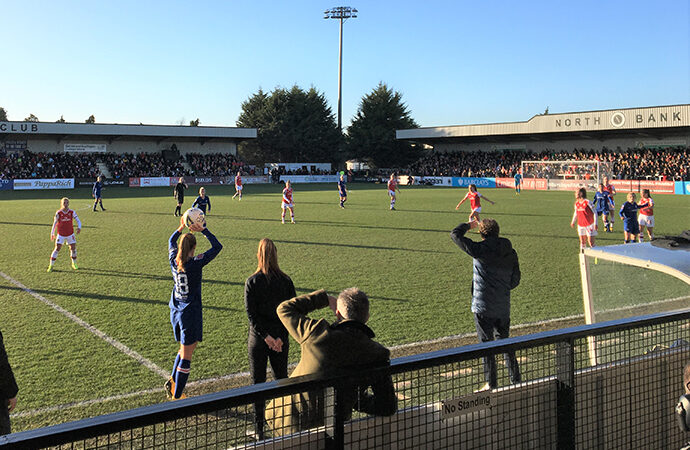 Four shots on target, four goals, four different scorers… and Sam Kerr’s first league goal on English soil. No wonder Emma Hayes was chuffed! The only strange thing about the 1-4 scoreline was that Arsenal scored at all; it was down to a very rare fumble by usually dependable keeper Ann-Katrin Berger. Otherwise, this was

The only strange thing about the 1-4 scoreline was that Arsenal scored at all; it was down to a very rare fumble by usually dependable keeper Ann-Katrin Berger.

Otherwise, this was a masterclass in control, tactical brilliance and concerted, wholehearted team play, with Chelsea pressing every ball and harassing every Gooner until the job was done.

Hayes said afterwards that she had 11 leaders on the pitch, and that was no word of a lie.

In dazzling low winter sun (which may have had some effect on Arsenal – who lost the toss – in the first half), Chelsea bossed the match from the peep as Abigail Byrne blew the starting whistle to the final moments of the four minutes of second-half stoppage time.

Sam Kerr lifted the millstone from around her neck by scoring, which might mean that the Australian TV crew which has been stalking her since she arrived at Chelsea just after Christmas might move on and look for other stories!

Hayes was delighted, and relieved, for her. As were her team-mates.

But the significance of this result is that it puts Chelsea back in the driving seat in a three-horse title race which will go to the wire. Looming on Groundhog Day – February 2 – is Man City v Arsenal, while on the more distant horizon is Man City v Chelsea on February 23.

Chelsea flew out of the traps at Borehamwood, Arsenal Women’s home ground, on a bitterly cold Sunday afternoon. It was so cold, in fact, that had kick-off been fixed for much earlier, the game could have been called off as the part that was in shadow was frozen in late morning.

But at 2pm everything was ready to go, with Beth England opening the scoring after 11 minutes. Guro Reiten, who should have been awarded the player of the match trophy, fed England, who jinked, teed herself up, then unleashed a superb left-foot curler which zinged past Manuela Zinsberger (despite some edge-of-fingertip contact) and flew into the top corner of the net.

It was all Chelsea. England nearly doubled the lead two minutes later; her header flying over the bar as she muscled in between Arsenal’s central defenders.

It was 0-2 after a quarter of an hour. A stunning looping ball into the heart of the Gunners’ area from Reiten was met by a firm, unstoppable header by the leaping Kerr (boy, can that girl achieve height!), who was then mobbed by the rest of the team.

Arsenal came closest to getting a first-half goal back when Katie McCabe waltzed through the Chelsea area after 19 minutes, but Berger was able to block with her feet, and the risk passed.

Instead, as Arsenal frustration increased and their vocal fans began to despair, Sophie Ingle added a wondergoal to her collection. Both she and England were shaping up to attack a loose ball on the left, but England unselfishly got out of the way to free the path for a magnificent exocet volley which soared through the air and into the net.

Surprisingly, Joe Montemurro didn’t significantly alter Arsenal’s tactics after the break, so – despite the addition of Beth Mead and Lisa Evans to the attack down the Gunners’ right – Chelsea continued to threaten.

After 68 minutes, Jonna Andersson raced down the Blues’ left wing and pitched a superb ball into the box for Reiten to head home. Reiten’s overall performance richly deserved a goal. She was subbed towards the end as she’d started to sniffle and sneeze, and signalled to the dugout that she needed to come off.

With a quarter of an hour remaining, the clean sheet was sullied as Beth Mead’s seemingly innocuous goalbound ball inexplicably eluded Berger, to spoil her afternoon. It remained 1-4, as the reliable Drew Spence came on for the final minutes in place of Kerr.

A significant result, in front of a 4,000-strong full house. Chelsea have done the double over Arsenal, and – depending on City’s next few matches – may have now tipped the balance their way in the title race.

If future performances are as all-conquering and sublime as this one, Chelsea will deserve to be champions.