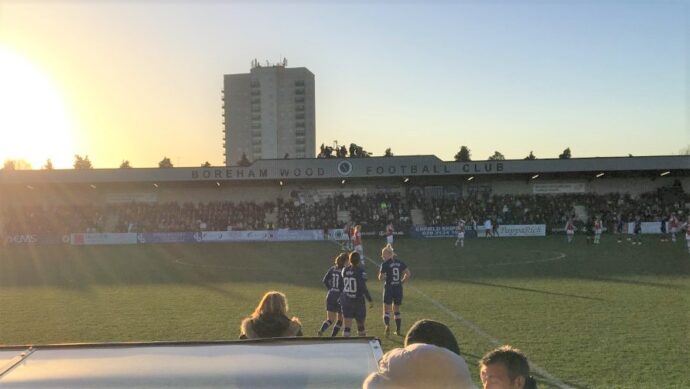 Playing into a low, ferocious sun that left Chelsea manager Emma Hayes with a headache, the Blues crushed the fight out of Arsenal in a 4-1 victory which the gaffer hailed as one of the best performances she can remember. Arsenal hadn’t been defeated at home in precisely a year. In fact, the last team

Playing into a low, ferocious sun that left Chelsea manager Emma Hayes with a headache, the Blues crushed the fight out of Arsenal in a 4-1 victory which the gaffer hailed as one of the best performances she can remember.

Arsenal hadn’t been defeated at home in precisely a year. In fact, the last team to do it was Chelsea… a statistic which underlines the magnitude of the weekend’s victory.

“It was three points in what was a rivals’ game, but not a title-deciding game,” said Hayes, drawing an important distinction between a key win over another contender, and a future victory which would make the WSL crown mathematically certain.

Hayes remains of the opinion that it’s a three-horse race between three thoroughbreds who (based on results so far this season) have roughly equal chances to lift the trophy on Saturday May 16. On that day (the day before Liverpool are inevitably acclaimed as the men’s champions of the Premier League), Chelsea play… Liverpool Women at Kingsmeadow.

“I’m delighted the sun has finally set,” said Hayes at the end of the match, as the ball of fire in the sky eventually sank behind the west stand, where the Chelsea fans – hailed by Hayes as the best in England – were gathered, belting out the songs for all their favourite stars. “My headache’s finally gone away!”

Next time the Blues visit Borehamwood, the occupants of the visitors’ dugout will have to take a leaf out of Arsenal’s book, and use counter-measures. The curved perspex roof of the Reds’ dugout was draped along its length by tracksuits, to shield the players from the dazzling rays – an effective sun block born of necessity.

Chelsea will also have to pack a box of blue baseball caps in the kitbag, and issue one to Hayes and another to goalie Ann-Katrin Berger, who may have been briefly blinded by the low sun as she made a hash of a seemingly simple save from Beth Mead to deny the Blues the clean sheet that their overall display deserved.

“We finally executed what I’d asked the team to do in the first 15 minutes of the game,” said Hayes wearily, referring to the dreadful starts Chelsea have had in many of their recent matches – home and away – when the aim appeared to be to give their opponents a bit of a lift and make the Blues’ task harder by gifting them the opening goal.

“We managed [the game] well, and we were worthy winners,” said Hayes, adding: “We’re all disappointed not to have a clean sheet, but we’re still unbeaten.”

Hayes’ annoyance at Berger’s fumble, which turned the overwhelming 4-0 win into a slightly less impressive 4-1, may well be reflected in her choice of goalie in a couple of Chelsea’s forthcoming matches.

Carly Telford is now over the flu that ravaged the squad in early January, so she is expected to be given the chance to shine between the sticks when the Blues travel to Charlton next weekend to play in the FA Cup.

Then the keeper to be chosen for the Groundhog Day clash with West Ham at Kingsmeadow will be picked based on performance. Hayes is resolutely egalitarian, and never chooses players because they cost a lot, or have an illustrious reputation. She rewards good play, enthusiasm and hard work with team selection, no matter who might be considered the ‘stars’.

“When you have great players who are great leaders, who take great direction and responsibility, anything can be achieved,” said Hayes. “They’re the best group of players I’ve had since I’ve been here at Chelsea. They’re in charge; I’m merely propping up the side while they’re winning football matches.

“The difference between the teams today was that I had a lot of leaders on the pitch. I’m happy [for Sam Kerr getting her first goal], but Beth England also scored a worldy of a goal, and deserves so much credit. There’s so much talk of Ellen White and Jodie Taylor… but England is England’s No9 as far as I’m concerned.”

Hayes’ tactics completely neutralised the Arsenal goal threat that is Vivianne Miedema, who can rarely have seen so little of the ball in a league match. Miedema was anonymous throughout the game; the Gunners’ midfield simply unable to supply her with the kind of penetrating passes she’s used to getting.

Hayes said she genuinely didn’t pay attention to the WSL table, partly because it is no longer carried in the Chelsea match programme – a £2 curio which reports on past matches (unlike the men’s version this season), but which shies away from the useful inside-back-cover chart (an essential reference for journalists) detailing which players played in which matches, who scored, who was booked, which subs were used, and how the table stands.

One reason she doesn’t bother much with the league table is because of last month’s postponed match at Everton – called off, maddeningly, on December 7 because of a frozen pitch. It means that until the season is almost over, Chelsea will always be a game in arrears.

Hayes said that lots could still happen in this enthralling, eventful season. “We drew away to Liverpool, we drew away to Brighton,” she said, highlighting the two results that have most disappointed her. “This is a team that still has to find its consistency.”

She feels that the key to Chelsea’s success is not just having leaders in every position on the pitch (and the 4-1-3-2 formation she chose to face Arsenal was spot-on), but also in having problem-solvers too.

“Great leaders solve problems; the collective spirit, wisdom and know-how [in the team] are a dream.”

Modestly she added that her role was merely recruiting and signing players “not just empowering players for the sake of it”, but taking a collective approach to matches, tactics and formations that draws on the skills of the fine squad she has assembled.

“I said to the players at half-time: ‘What do you want to do in the second half?’ They need to take decisions; it’s a collaboration. That was an unbelievable game today.”

She said that players played for the badge, and that there would be no gloating over defeating Arsenal. “I’m always frustrated,” she laughed. “And of course I didn’t expect to win 4-1 today.”

Hayes reserved special praise for the one player in her team who (because she isn’t the loudest, brashest or rowdiest) is often overlooked in match reports… Sophie Ingle. She scored one of the best goals she’ll ever score, but it was her link-up play that caught the eye throughout the match.

It’s true; Ingle had a belter of a game against Arsenal. Mind you, Ji So-Yun was also incredibly solid, Millie Bright didn’t put a foot wrong, Guro Reiten was GL Sport’s personal player of the match overall, Maren Mjelde bossed Chelsea’s right wing, Sam Kerr blossomed, Erin Cuthbert was a deadly imp, and Jonna Andersson is arguably developing into the best left back in the WSL. What a shame only Millie is English, otherwise Phil Neville could name the Chelsea team as the national team.

“She’s so clever; such a great leader,” said Hayes of Ingle. “I’ve said it before, but Team GB should be built around Sophie Ingle.”