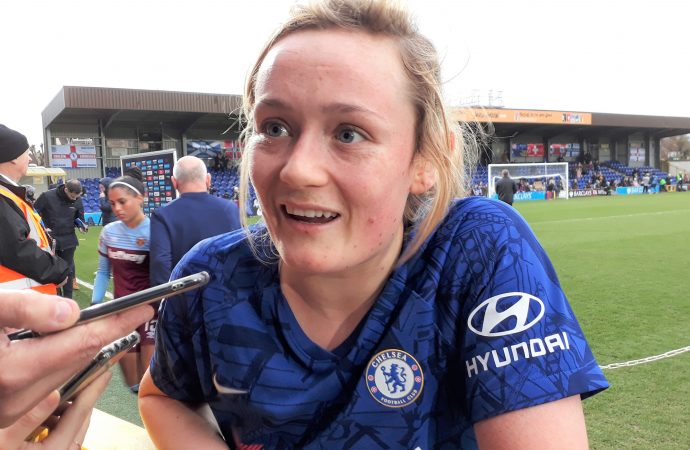 She’s quick, she’s accurate, she’s inventive and she’s fearless. No wonder Erin Cuthbert is high on Phil Neville’s list as an in-form addition to the nationwide squad he will take to the Olympics. The Chelsea striker/winger is now back to full fitness, as she vividly demonstrated in last weekend’s 8-0 drubbing of West Ham, to

She’s quick, she’s accurate, she’s inventive and she’s fearless. No wonder Erin Cuthbert is high on Phil Neville’s list as an in-form addition to the nationwide squad he will take to the Olympics.

The Chelsea striker/winger is now back to full fitness, as she vividly demonstrated in last weekend’s 8-0 drubbing of West Ham, to nudge the Blues further forward in their quest for the Women’s Super League title.

She seems to have gained a yard or two in pace over the past month, and that extra va-va-voom is doing wonders for her confidence.

Add that to the fact that Cuthbert was filling in for absent superstar Sam Kerr – away on Olympic qualifying duty – and the performance was all the more remarkable and assured.

The mini Scottish marvel exemplified her surge in form by taking her own goal – in the 53rd minute – with coolness and calm… and promptly dedicated it to ‘Paps’, her beloved grandad, who died last week.

Racing through the Hammers’ defence to chase down a perfectly timed side-of-the-boot forward pass from Drew Spence, the 21-year-old No22 simply slithered past the last defender, Grace Fisk, with a cute flick before unleashing a monumental left-foot volley that sailed 20 yards through the chilly Kingsmeadow air, evading keeper Courtney Brosnan and burying itself in the corner of the net.

Was Cuthbert level with Fisk when the ball was played, or half a yard ahead? No flag was raised, and although there were a few ironic chants of “VAR, VAR” from the West Ham fans, the only thing Irons manager Matt Beard could do was howl his protests at ref Amy Fearn… who told him to calm down, then booked him when he didn’t.

Admitting that no one in the Chelsea squad had expected anything approaching the crushing final scoreline, Cuthbert said: “I was quite shocked, given that we’d only got back [from the midweek Manchester game] in the early hours of Thursday.”

She agreed that the result was all the more remarkable because the Women’s Super League is currently so tight, with most weekends producing at least one upset as the overall standard of the women’s top flight continues to improve, week after week.

“I thought there’d be a wee bit of fatigue in our legs, but it shows the quality of our recovery. We’re recovering well, and even when we have three games in a week we can still perform at this level.

“It’s exciting; I love playing with this team, even in different positions, but anywhere on the pitch I’m happy with!”

Most pundits assumed that Cuthbert would be starting the game as part of a midfield quartet supporting Beth England up front, but manager Emma Hayes had actually given her versatile 5ft 4in Scot instructions to pair up with England – in the same way that Kerr does – to maximise the crossfield chances created by the Blues’ skilled wingers and midfielders.

As Chelsea’s superiority became evident, Cuthbert relished that joint striker role, and had several opportunities to score in the first half; sometimes seeming too eager to hit the back of the net!

“I seem to score the harder ones,” she laughed. “In the first half I had a couple of chances and just couldn’t get the ball from under my feet.

“I’m filling in, in Sam Kerr’s place, so it’s not an easy thing to do! I’ve got to fill her boots well, and keep them warm for her coming back!”

The eminently quotable Scot continued: “It was a relief to see [my goal] go into the back of the net. To win the league you have to focus on each game and the process; it’s why we’re unbeaten in 12 months.

She said that each month was important for the team, but conceded that the media attention on February (when Chelsea have to twice travel to Manchester for key games) made it stand out more than others.

“But there’s no point winning every game in February and losing one in March,” she insisted. “There are big games coming up. We’re not getting too far ahead of ourselves, but we know it’s do-able.”

Cuthbert said she was particularly pleased that Ramona Bachmann had come on as a sub and scored, especially as the Swiss winger had gone close twice. “Third time lucky! She’s scoring in training, so maybe it’s just a bit of a mental block that she hasn’t been scoring,” said Cuthbert. “I’m really happy for her; we celebrated with her because we know how much it means to her.”

She also said it was great that academy players were coming through, training with the first team and taking their chances – notably Emily Murphy’s late final goal to round off the 8-0 result.

Of Cuthbert’s own form, she said: “I’ve been consistently averagely good, kind of thing for me. It took me a while to get over injury and get over the World Cup mentally. It’s about getting my recovery off the pitch right. Every single game I give 100% for the team, and it’s not that I’ve been playing badly. I just wanted to reach another level.”

On her prospects of being a part of Phil Neville’s Team GB in the summer, Cuthbert was hopeful, but knows that her form will ultimately dictate whether or not she plays a part.

“Chelsea’s my priority, but I want to do the best that I can for Phil. I’m in dialogue with him, in terms of how my performances are going, and what I can do better.”

She said that any feedback from Phil Neville to her was channelled through Emma Hayes. “I just want to be fitter, stronger and faster, and I think I can do that as I’m willing to learn; I’m willing to do whatever it takes. I have that mindset in me every day.”

She said that the reason she appeared to be gaining a yard or two over West Ham’s defenders was her improving fitness. “I felt fresh, I felt good,” she said, adding that it helped being part of “a happy camp”. 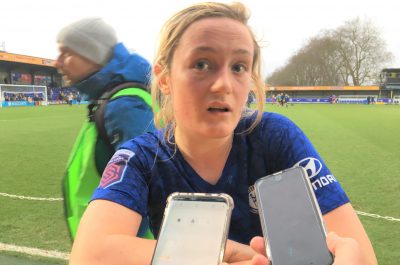