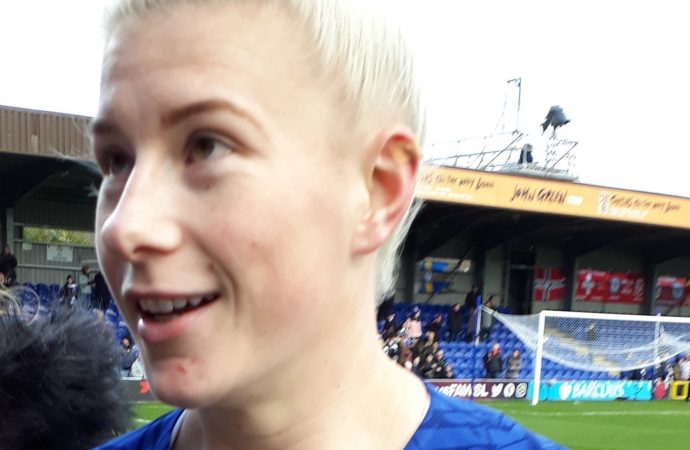 Beth England? Ji So-Yun? Sam Kerr? Erin Cuthbert? Who will score the 2,000th goal in the FA Women’s Super League? It could well be a Chelsea player, as the team is in such a rich vein of scoring form, netting eight against West Ham last weekend. The current total of WSL goals stands at 1,976,

Beth England? Ji So-Yun? Sam Kerr? Erin Cuthbert? Who will score the 2,000th goal in the FA Women’s Super League? It could well be a Chelsea player, as the team is in such a rich vein of scoring form, netting eight against West Ham last weekend.
The current total of WSL goals stands at 1,976, so it only needs another 24 to reach the magic target. The four WSL games played last weekend generated a total of 14 goals, so this Sunday  – or possibly the midweek fixtures – could see 2,000 reached.
Gilly Flaherty, former Blues star and now West Ham captain, made history by scoring the first goal in the league. She was playing for Arsenal at the time, against Chelsea, and the Gunners won 1-0 on April 13 2011 at the Blues’ then home in Morden.
Chelsea travel to Manchester United on Sunday afternoon (the match is live on BT), with the form guide suggesting a 1-0 win for the Blues is the most likely outcome in a game likely to be badly hit by Storm Ciara.
That was the score in the clubs’ two meetings this season already – a 1-0 in November in the Barclays FA Women’s Super League and a 1-0 in the semi-final of the League Cup in January – both thanks to Maren Mjelde winners.
However, this is the first meeting of United and Chelsea in the league at Leigh Sports Village, and Emma Hayes will be looking to build on last weekend’s comprehensive win at Kingsmeadow, with six separate scorers taking their chances well. She won’t be happy unless the Blues continue the form that has seen them jump into second place behind Man City, with a game in hand.
City are away to West Ham, while Arsenal (currently in third spot) have the little matter of the north London derby with Spurs.

Having won six and lost five of their first 11 Super League matches, United shared the spoils with Reading last time out – their 1-1 draw being their first in the competition.

The Blues’ 8-0 victory against the Irons equalled their largest FA Women’s Super League win; they beat Yeovil by the same margin in May 2019. Chelsea are currently on a 27-game unbeaten run in the competition away from home (W18 D9).

The danger woman for Chelsea to watch is, as usual, Lauren James, sister of Chelsea men’s right back Reece, who has netted five goals in her last five United appearances in the WSL, including their opener against Reading last time out.

In fact, five of James’s six top-flight goals have come from eight starts, compared to just one in eight when she has come on as a sub.

Chelsea’s Beth England has scored 12 league goals this season that have been worth seven points to her team (more points than any other player in the competition), according to the latest batch of Opta stats released ahead of this weekend’s matches.