Not a fortress, a food bank 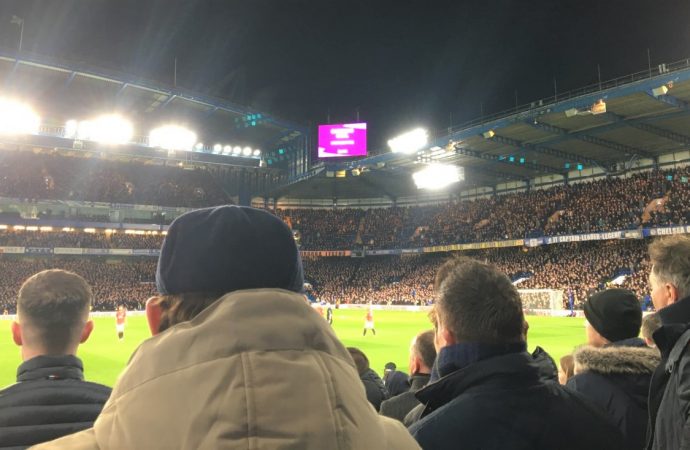 Never mind the football! All 81,008 eyes (slightly fewer, if there were any one-eyed fans present) were on the giant screens rather than the action as an inordinate amount of Monday night’s Chelsea v Man Utd match was spent waiting for VAR official Chris Kavanagh and his assistant, Sian Massey-Ellis, to determine: a) if Chelsea

Never mind the football! All 81,008 eyes (slightly fewer, if there were any one-eyed fans present) were on the giant screens rather than the action as an inordinate amount of Monday night’s Chelsea v Man Utd match was spent waiting for VAR official Chris Kavanagh and his assistant, Sian Massey-Ellis, to determine:

a) if Chelsea had scored their first goal

b) if Chelsea had scored their second goal

c) if a United player who kicks out at an opponent’s crown jewels should remain on the pitch.

If you answered No, No, Yes, a new career beckons for you as a VAR analyst on a business park out near Heathrow Airport, where decisions that change matches – and appear to be changing football itself – are taken.

The fact is that it ended Chelsea 0 United 2, meaning the Blues can all-but kiss goodbye to fourth place in the league (and Champions League football next season) as the current trend of dropping home points appears entrenched, and the club is poised to sink gracefully down the table as every chasing side leapfrogs them in the coming weeks.

For better or worse, VAR decided to disallow the goals that would have at least given Chelsea a point, leaving Ole Gunnar Solskjaer with a huge (if slightly sheepish) grin on his face, and Frank Lampard fuming and extremely distressed.

But United’s second goal, a thumping header from Reds captain Harry Maguire, wouldn’t have happened in the 66th minute had Maguire been red-carded in the 21st minute for booting Michy Batshuayi in the how’s-your-fathers.

VAR apparently deemed that it’s perfectly all right to do that, so nothing – not even a yellow – was shown.

United have done the double over Chelsea in the Premier League this season – the 4-0 opening weekend thrashing at Old Trafford now followed by a 2-0 win at the Bridge.

Worse, after a drought of home games, Chelsea are now playing three in a week.

Next up, Jose Mourinho’s Spurs, determined to get revenge for past humiliations, followed by Bayern Munich in the Champions League; a team which must be monitoring the capers in SW6 with bewilderment and glee ahead of their visit.

The fact is, Stamford Bridge is no longer a fortress, it’s a food bank, generously handing points to needy visiting managers.

Chelsea flashed the ball around the pitch with ease on a chilly Monday evening, with Mateo Kovacic in particularly good form, but after N’Golo Kante hobbled off the pitch (replaced by Mason Mount) in the 11th minute with an injury, things began to fall apart.

As Maguire and Batshuayi contested a ball at the edge of the pitch, right by the Chelsea dugout, in the 21st minute, both men tumbled to the deck. However, as Maguire fell, he extended the studs of his boot right into Batshuayi’s groin.

Lampard and his lieutenants were outraged, and leapt up and down in fury. Ref Anthony Taylor referred the matter to VAR, and the stadium watched and waited for a decision. No red card.

VAR wasn’t needed nearly a quarter of an hour later when Willian appeared to have been tripped on the edge of the box – the ref ruled that there had been no contact, it was a dive and a yellow card was shown. The supposed culprit, Bruno Fernandes, looked relieved.

Lampard brought on Kurt Zouma in place of Andreas Christensen in the second half, and it seemed to pay dividends. On 55 minutes, from a Chelsea corner, Willian’s floated ball fell to Zouma, who converted. That would have been 1-1, but VAR decided that Chelsea captain Cesar Azpilicueta had commited a foul. The fact that he himself was shoved in the back didn’t, apparently, matter. Goal disallowed.

After United went 2-0 up through Maguire’s header, Chelsea went on the attack again with Olivier Giroud making a rare sub’s appearance for Batshuayi. In the 77th minute, Mount crossed from the right and Giroud planted the ball in the net. Would it be 1-2? No it wouldn’t. VAR decided Giroud had a toe offside.

Chelsea fans were pretty clear where they stood on all this. To the famous ‘Bread of Heaven’ chorus from Guide Me, O, Thou Great Redeemer, supporters launched into:

It’s also the first time United have done double over the Blues without conceding a goal since the George Best era.

An exasperated Lampard called the game, and result, “typical of home games this season”. Chelsea are going to have to stop complaining and start shooting if they are to beat Tottenham at the weekend.

All the fancy build-up play in the world is worthless if there aren’t goals at the end of it. And for Chelsea, currently, there aren’t.