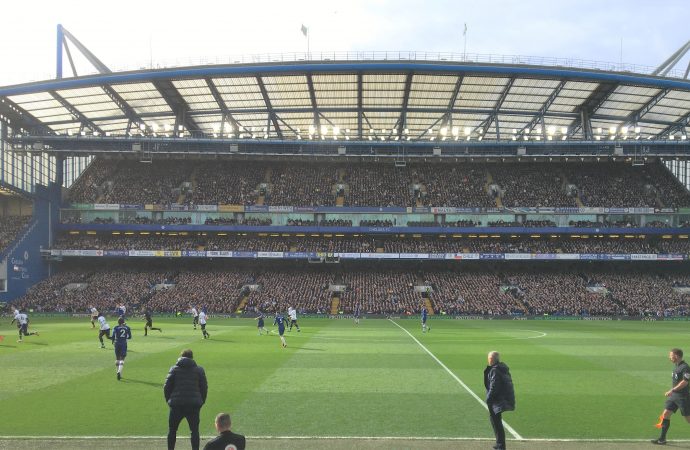 When they clashed in the league at White Hart Lane, the former student Frank Lampard had the tactical beating of his old mentor Jose Mourinho. It happened again at Stamford Bridge, where Lampard’s 3-4-2-1 formation worked a treat with Olivier Giroud (still smarting after his ‘goal’ was ruled offside against Manchester United on Monday) had

When they clashed in the league at White Hart Lane, the former student Frank Lampard had the tactical beating of his old mentor Jose Mourinho.

It happened again at Stamford Bridge, where Lampard’s 3-4-2-1 formation worked a treat with Olivier Giroud (still smarting after his ‘goal’ was ruled offside against Manchester United on Monday) had every reason to shine. As a former Arsenal front man, he knew exactly the reception he would receive from Tottenham fans massed at the Shed end.

Giroud got the first goal, Marcos Alonso – constantly jeered and barracked by the away fans – got the second and – with the exception of a late, late consolation which actually went in off a Chelsea defender – this was another masterclass in tactics and cunning as Lamps eclipsed a sullen Mourinho once more.

This was exactly the tonic Chelsea needed as they prepare to welcome Bayern in the Champions League on Tuesday – another home defeat in the build-up to such a crucial match was unthinkable. Instead, the scouts from Munich will be reporting back that the Blues look formidable opponents once again.

It was a crucial opportunity for the Blues to reinstate the cushion between their fourth place in the league and the chasing pack.

Spurs had the chance to leapfrog Chelsea, but from Michael Oliver’s first whistle to the last, it never looked on.

Chelsea lost the toss and had to face the low winter sun – lower and nastier for this 12.30pm kick-off, but with Willy Caballero once again preferred to Kepa (who is being given a serious message by his current exile) the defensive trio of Cesar Azpilicueta, Tony Rudiger and Andreas Christensen looked solid, backed by outriders Reece James and Marcos Alonso, who knitted up with Jorginho and Mario Kovacic in a fluid midfield.

Giroud had something to prove, and was simply outstanding. When Tammy Abraham came on in the second half as a straight replacement, you realised instantly how lightweight he is in challenges, and how solid and sturdy a target man the ex-Arsenal forward is.

He was man of the match in a game cluttered with strong Chelsea performances. The 2-1 scoreline doesn’t reflect the balance.

The first-half goal was extraordinary. It came after a quarter of an hour. Giroud shot, and his effort was blocked by Hugo Lloris, the ball fell kindly to Ross Barkley, but his shot thwacked against the post and bounced out again. So Giroud had a second chance to hammer the ball into the net, and took it well.

For two horrible minutes VAR examined every angle to see if there was offside (just like Monday), but this time – to general relief – the goal was confirmed.

Two minutes after the restart it was 2-0. Alonso, bounding down the left, was the beneficiary of an excellent run down the right by Mason Mount. He squared, Barkley passed it on, and Alonso belted it home.

The ugliest incident of the day was an apparent stamp on Azpilicueta’s leg by Giovani Lo Celso. Just as in the little matter of United’s Harry Maguire sticking his boot into Michy Batshuayi’s family album on Monday, the incident happened right in front of the dugouts. An incensed Lampard bellowed his fury at fourth official Kevin Friend, but VAR looked at it, and presumably decided there was no intent. That isn’t how it looked in the replays.

VAR remains in the dock. If blatant, obvious red card incidents continue to go unpunished on review, what is the point of the video referee, who earns more than £1,000 for sitting and watching telly during the afternoon?

“It was a tackle that endangered the player. It is just not good enough. They had a couple of minutes to look at it and got it wrong,” said Lampard afterwards. “It is another huge question mark over VAR. Referees have such a difficult job and VAR was brought in to help them, make the game better and that is just so wrong today.”

It wasn’t until the 89th minute that Spurs finally beat Caballero – but the Erik Lamela shot was heavily deflected off Tony Rudiger’s heel, which wrong-footed the Chelsea keeper. It meant there was a nervy last few moments, but the Blues deserved their win.

Jose Mourinho blamed his lack of fit front players. “We don’t have a striker,” he said. “Our attacking players are not strikers and are in huge levels of fatigue, so very, very difficult for us.”

He refused to accept, however, that his tactics had been supplanted by his former player Lampard’s. “No tactical problems,” he insited. “We were completely in control of the space, punished by a couple of individual mistakes.

Nevertheless, it means that Frank Lampard’s Chelsea are the first team to defeat a side managed by Jose Mourinho both home and away in a single league season. And that’s something to add to Lampard’s CV.