Battle of the giants 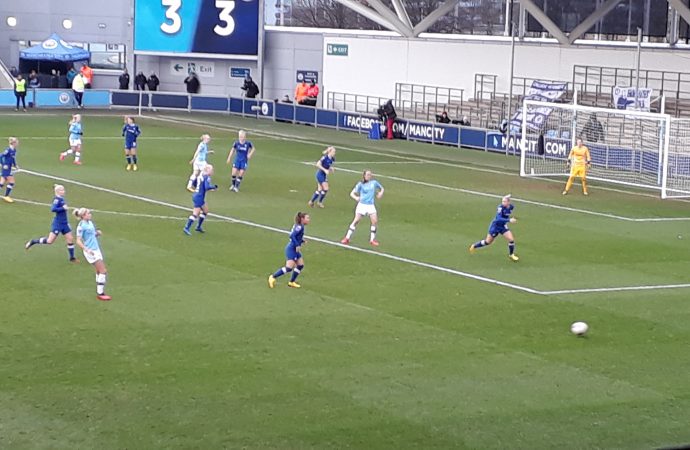 It was a battle of the giants. Two teams who top the Women’s Super League, stuffed full of world-class international players in a bid to outplay each other at City’s home ground – the Academy Stadium, writes Jane Grove. In the end, unlike the frantic game of chess it resembled, there was no checkmate, just

It was a battle of the giants. Two teams who top the Women’s Super League, stuffed full of world-class international players in a bid to outplay each other at City’s home ground – the Academy Stadium, writes Jane Grove.

In the end, unlike the frantic game of chess it resembled, there was no checkmate, just a score draw between Manchester City and Chelsea – but what a score draw – a six-goal thriller. The crowd (at times deafening courtesy of an enthusiastic drummer) saw a game which will live long in the memory of those 3,542 supporters who braved the bitingly chilly February Sunday afternoon.

Chelsea have not yet beaten their rivals on their home turf and the Sky Blue’s Lauren Hemp – outstanding down their left flank – was determined that would still be the case. Her 76-minute equaliser which drew the score level at 3-3, saw the striker get the better of Chelsea’s midfielder Maren Mjelde in the box to shoot it past the outstretched leg of goalie Ann-Katrin Berger just two minutes after Beth England’s wonder strike from 30 yards out which had given the visitors the advantage.

The game had ebbed and flowed throughout – giving Chelsea manager Emma Hayes and City’s head coach Alan Mahon (who has recently taken over from Nick Cushing) crooked necks.

Spectators were treated to an early taste of what was to come when 20 seconds in, Guro Reiten slid the ball to Australian international and most expensive WSL player Sam Kerr. Her shot was saved by City’s goalie Ellie Roebuck who skewed it into the path of England across the goal face – but rather than a simple tap in it bobbled through the striker’s legs.

City drew first blood with an Ellen White goal on 22 minutes struck from close range. But the tables were to turn six minutes before half-time with midfielder Ji So-Yun’s 25-yard equaliser. The volley took a slight deflection off the head of City’s full-back Demi Stokes into the back of the net.

Chelsea had the momentum with them going into half time, but it was City who went ahead on the hour mark thanks to a Georgia Stanway belter – the 2,000th goal of the WSL era.

But Chelsea rallied and eight minutes later captain Magda Eriksson scored her first WSL goal of the season. Sophie Ingle crossed and the skipper got on to the end of it with a diving header which was fumbled – and missed – by Roebuck.

Amazingly the Citizens had the chance to go ahead again when Ingle was deemed to have brought down City forward Caroline Weir in the box.

Stanway, looking for the double, took the spot kick which brought a world-class save from the German stopper whose parry was smashed clear by the boot of defender Millie Bright.

Two minutes after Ramona Bachmann came on for Reiten, the number 23 passed the ball to England who, from 30 yards unleashed a thunderbolt which gave Chelsea the lead for the first time in the game  – only to be cancelled out by Hemp two minutes later.

The result leaves Chelsea in the driving seat as, although they trail City by one point in the league, they still have a game in hand.

Next stop for the Blues is Nottingham this Saturday (Feb 29) where they will face Arsenal in the Continental Tyres League Cup final – a trophy which they have never won.